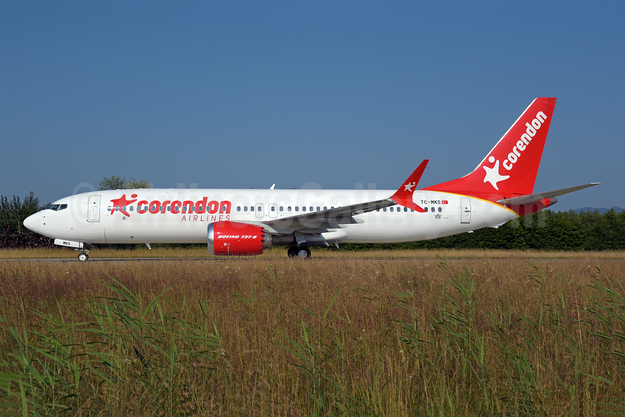 Five new 737-8 MAX 8 aircraft are confirmed to be delivered to Corendon Airlines (Turkey) in Spring 2022 and one new 737-8 will deliver to the Turkish airline in the first quarter of 2023.

Corendon Airlines Group will lease three new 737-9 MAX 9 aircraft that are scheduled to deliver to the airline starting in the first half of 2023.  All nine 737 aircraft will deliver from ALC’s order book with Boeing.

Corendon Airlines has suspended all operations until at least April 30 with this announcement:

In this context, we decided to stop our flight operations with our Corendon Airlines (CAI) and Corendon Airlines Europe (CXI) brands, starting from March 24 until April 30, 2020 in line with the measures taken. All flights that we will perform until this date have been canceled.

You can change or cancel your reservations from March 24 until April 30 by using our communication channels. All your rights arising from cancellations are protected by Corendon Airlines. We ask for your patience due the delays that were caused by the high volume of requests we get. All requests sent to us are resolved as quickly as possible.

We closely follow the Covid-19 epidemic developments related to air transportation. We will continue to keep you informed of all developments on the subject. Thank you for your understanding.

To meet again in the sky as soon as possible.

We wish you healthy days!