Gambia Bird Airlines (Banjul), since the Ebola crisis spread, continued to operate the Banjul – London (Gatwick) route but dropping the stop in Sierra Leone due to the on-going crisis. A few days ago, the company announced they would add London (Gatwick)-Accra and Gatwick-Lagos flights. However yesterday (December 30), the west African airline ceased all operations.

The airline issued this statement yesterday:

Gambia Bird Airlines has suspended commercial flight operations until further notice. This operational decision is effective as of December 30.

We wish to express our sincere regrets for disrupting the travel plans of those of our esteemed guests who are booked on the suspended flights. We further wish to confirm that we will provide a full refund of all tickets purchased prior to this flight suspension.

Furthermore, Gambia Bird Airlines wishes to reaffirm that we will comply with all our obligations and that we will provide all necessary support services to passengers affected by the flight suspension.

Gambia Bird Airlines (Banjul) has been unable to resume flights to London (Gatwick) according to Proactive Investors. The west African airline had been planning to resume operations to London on October 17. The UK government through the Department of Transport did not renew its permit to operate to the UK due to the on-going Ebola crisis. The airline has been hit hard by the outbreak.

Previously Gambia Bird had extended the suspension of all flights to and from Monrovia, in Liberia, and to and from Freetown, in Sierra Leone, until September 28. 2014, due to the current public health situation in both countries. 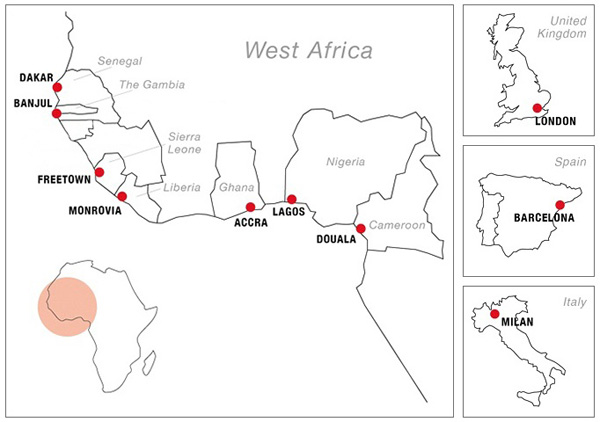 Germania Fluggesellschaft (Germania Group) (Berlin) is expanding in the United Kingdom for this summer season as part of its international strategy.

Berlin-based Germania Group is continuing the successful internationalization of its operations and is stationing two aircraft in the United Kingdom for summer of 2013. Aside from charter flights from London-Gatwick and Manchester to the Greek islands and Cyprus, Germania will operate a scheduled service from London to Pristina.

For the winter season, Germania also operates full charter flights to Greece and the Greek islands, including Corfu, Crete, Mykonos and Samos, for tour operators such as Sunvil Holidays and Pure Crete.

For this purpose, the airline is stationing an Airbus A319 at London Gatwick. On behalf of Olympic Holidays, Germania also flies to the Greek mainland, Greek islands including Crete, Rhodes and Mykonos, and Cyprus from Manchester, the UK’s largest airport outside of London. Germania has stationed an Airbus A319 in Manchester in the colors of its West African sister airline Gambia Bird. The aircraft is available for use in Manchester, as the summer flight schedule in West Africa is adjusted to traditionally lower demand.

The airline is also expanding its operations at Erfurt-Weimar in Germany. Germania started a new weekly route to Palma de Mallorca on May 17. Flights to Ibiza, Corfu and Crete will be added in June.

Gambia Bird (Banjul) is a new airline in Gambia in western Africa. According to Airliners.de, in cooperation with AJW Aviation, the new airline will lease two Airbus A319s from Germania. Gambia Bird is planning to serve Dakar, Conakry, Freetown and Lagos. Later the company, hopes to expand to Europe. Germania will retain a 90% ownership in Gambia Bird. The first Airbus A319 has been painted at Norwich.

According to a report by ATW, Gambia Bird is now planning to launch operations on October 15, 2012 from Banjul with weekly flights to London (Gatwick) and Barcelona and also from Freetown to London (Gatwick). The new airline is also planning four-times-weekly service from Banjul to Dakar, twice-weekly to Freetown, Monrovia and Lagos as well as once a week service to Conakry and Accra.

The airline has the following statement on their website:

“Flights will commence later in summer and the airline will connect Banjul to other West African Airports but also link Banjul to Europe. The schedule will be published soon.”