Luxair has replaced the blue color of its titles on one of its aircraft in favor of the orange color,
symbol of this action set up by the UN more than twenty years ago. 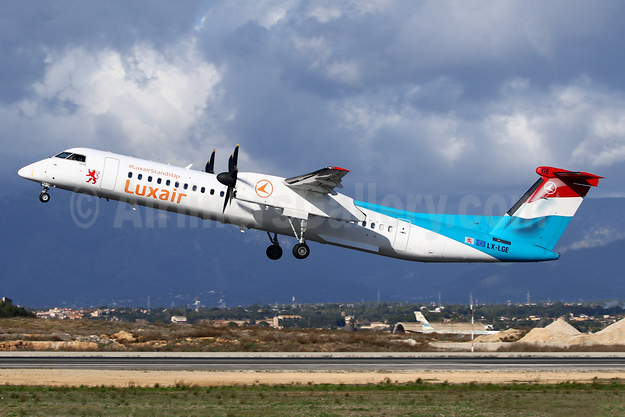 Luxair provides, for the first time, its most precious asset: its brand, its colors, the livery of one of its aircraft – in order to raise awareness among its staff, passengers and communities.
Luxair has replaced the blue color of its logo on one of its aircraft in favor of an orange color, symbol of this action set up by the United Nations more than twenty years ago.

As of November 25, 2020, the Luxair’s de Havilland Canada Q400, registered LX-LGE, has been unveiled in a special livery and will carry the associated message across Europe.

Luxair has issued this statement:

During the fourth tripartite aviation sector meeting, Luxair presented the current situation and its forecasts for 2021.

While it is currently still possible to travel, the demand for travel is falling sharply. The health measures introduced in almost all the countries served by Luxair are obviously having an impact on customer behavior, and cancellations are increasing.

In this context, the airline and the tour operator are striving to offer products and services adapted to the situation and requirements.

Indeed, Luxair has noted a significant number of customers expressing their confidence in the measures taken by the entire travel industry. Last week, some 300 people still booked holidays with LuxairTours, taking advantage of the ideal period to travel to the Canary Islands. A destination that customers can fully enjoy at the moment.

Furthermore, to support the mobility needs of its customers, Luxair maintains an optimized flight operation and continues to guarantee the connection of Luxembourg with European and further afield destinations for the period November-December 2020. Luxair will strengthen its flight offer for the Christmas period, notably to Cape Verde, Egypt, Djerba, Austria and Montenegro. Security and flexibility drive all strategic decisions taken by Luxair.

As Luxair plays a decisive role in the economy of the Grand Duchy and the Greater Region, this same connectivity will be enhanced next year by the addition of new destinations, including Usedom, Toulon, La Rochelle and Thessaloniki.

From spring onwards, Luxair will connect Luxembourg to more than eighty destinations. This is an essential service to guarantee the connection of foreign communities in Luxembourg to their home countries, particularly with Portugal, Spain and Italy, to promote exchanges between the main European economic centers such as London, Geneva, Berlin, Paris and Milan, and to meet the travel demand, which persists despite the situation.

Luxair-Luxembourg Airlines (Luxembourg), the national airline of the Grand Duchy of Luxembourg, has placed a firm order for another Bombardier DHC-8-402 (marketed as a Q400) turboprop airliner and has also taken an option for an additional aircraft. The airline currently operates a fleet of six DHC-8-402s.

Luxair-Luxembourg Airlines (Luxembourg) has announced it will resume service to Dublin on March 30, 2014 with four weekly frequencies. The restored route will operate during the summer season with Bombardier DHC-8-402 (Q400) aircraft.

According to the flag carrier, “This decision is part of the new Luxair strategy to serve its customers better, not only with a more attractive fare structure but also by developing its European network according to the demand of both business and leisure travellers. This follows the opening of the new Luxembourg-Copenhagen route as of June 3, already coming up with a very good load factor. This also is in accordance with the enhancing of the London City route (a fifth daily flight is being operated since April 8) and the Milan Malpensa connection (a third daily flight is being operated since September 2012).

A losing year in 2012. Previously the Luxair Group issued its financial statement for 2012:

The aviation sector remains very sensitive to the vagaries of the economy, with increased exposure with regard to traditional regional air transport in Europe. Luxair Luxembourg Airlines’ operating result thus logically experienced a further downturn in 2012, while the tour operator Luxair Tours only just managed to struggle through in a highly competitive environment. As for the freight handling business, the interaction between the state of the economy and goods transport unsurprisingly resulted in a decline in volumes handled by Luxair CARGO. 2012 was therefore a difficult year for Luxair Group and resulted in a loss of 10.5 million EUR ($13.7 million).

2012 was marked by increased competition on Luxair Luxembourg Airlines’ domestic routes, particularly with regard to flights to and from Munich, Geneva, London and Hamburg, as well as connecting traffic via the hubs served by competitors. The rise in the price of oil, + 10% compared with 2011, is another factor which weighed heavily on Luxair’s financial performance.
On a like-for-like basis, Luxair recorded a 7% rise in passengers, which enabled passenger numbers to stabilize despite lower capacity due to a reduction in the number of flights.

Panalpina (Basel) has sold its 12.09 percent share of Luxair-Luxembourg Airlines (Luxembourg). The government of Luxembourg purchased the shares in June according to this report by Handelszeitung.

Luxair-Luxembourg Airlines (Luxembourg) has now been identified as the company that ordered for new Bombardier DHC-8-402 (Q400) turboprops on August 16. The airline currently operates five Q400s.

Luxair-Luxembourg Airlines (Luxembourg), the national airline of the Grand Duchy of Luxembourg, has finalized an order for an additional Next-Generation 737-800 airplane. The airline previously ordered a 737-800 in June.

Please click on the AG icon for a direct link to the Luxair photo gallery.

Luxair-Luxembourg Airlines (Luxembourg), the national airline of the Grand Duchy of Luxembourg, has signed an agreement with Boeing (Chicago, Seattle, Wichita and Charleston) to purchase one Next-Generation 737-800 jetliner. The airplane will join Luxair’s Next-Generation 737 fleet of three 737-700s and one 737-800. The order was previously recorded on Boeing’s website as an unidentified customer.

Copyright Photo: Trevor Mulkerrins. TUIfly's Boeing 737-8K5 D-AHFN (msn 28228) pictured at Shannon on November 13 after repainting. It is preparing to depart to Hanover prior to delivery to Luxair as LX-LGT.

Luxair-Luxembourg Airlines (Luxembourg) is planning to add its first Boeing 737-800 on December 1.