A recently signed agreement between SmartLynx – a member of the Avia Solutions Group (ASG), the largest aviation and aerospace group of companies in Central and Eastern Europe – and Royal Air Maroc aptly illustrates SmartLynx’s commitment to the viability of long-term commercial partnerships.

The agreement comes after a rigorous Royal Air Maroc selection process and was based on SmartLynx EASA and IOSA agreements – SmartLynx is an IOSA certified airline and an EASA charter agreement signee – along with strong qualities and vast experience.

The expansion of the SmartLynx client portfolio through the addition of the long-established Royal Air Maroc underlines the company’s vision of acquiring and maintaining valued partnerships which will add significant credence to its long-term growth plans.

As part of a long-term ACMI agreement (aircraft, crew, maintenance, and insurance) 5 SmartLynx A321 aircraft will come into service for the Moroccan national carrier and the country’s largest airline. The esteemed 64-year old airline currently operates a fleet of 59 aircraft on routes to more than 80 countries globally.

In a period between July 1, 2021 and September 15, 2021 SmartLynx units will be based at 5 major hubs of Moroccan aviation; Tangier’s Ibn Battuta Airport, Fes Sais International Airport, Nador Airport, Casablanca Airport, and Oujda-Angads Airport.

Royal Air Maroc has made this announcement:

Pursuant to the decision of the Government of the Kingdom of Morocco, Royal Air Maroc announces the suspension, until further notice, of all its international flights.

British Airways and Royal Air Maroc have announced a new codeshare agreement which will open up new routes across Morocco including Casablanca and Agadir.  It will also give customers more flight flexibility between London Heathrow and Marrakesh.

Customers will be able to book from February 13, 2020 when the new agreement takes effect and codeshare flights will operate from February 20, 2020, prior to the Moroccan airline’s joining of the oneworld alliance on April 1, 2020.

British Airways’ first African codeshare will give its customers more choice of services between Heathrow and Marrakesh. As well as daily access to Royal Air Maroc’s hub in Casablanca, which is not currently served directly by British Airways.

Casablanca also serves as the perfect hub for connections onto other Royal Air Maroc destinations, including Abidjan in the Ivory Coast, Freetown in Sierra Leone and Agadir in Morocco.

American’s customers will be able to purchase select Royal Air Maroc flights to Casablanca, Morocco (CMN), which will provide seamless connecting service to Marrakech, Morocco (RAK). These flights are available for sale now for travel beginning December 26. The codeshare will expand to additional cities across the African continent in early 2020.

Beginning in early 2020, the codeshare agreement will provide American’s customers access to popular destinations in Africa, including:

American will begin seasonal service to CMN June 4 as the only U.S. carrier with nonstop service to Morocco, which will be operated three times per week. Flights are available for purchase now.

Royal Air Maroc is joining other carriers by voluntarily suspending indefinitely the use of its new Boeing 737-8 MAX 8 aircraft as of today. Royal Air Maroc’s CEO, Abdelhamid Addou, stated the company would suspend all MAX flights.

Meanwhile in Africa, Comair, another MAX operator, issued this statement:

Our sympathies are with those affected by the heartbreaking tragedy of Ethiopian Airlines, flight ET 302 – March 10, 2019, especially the families and loved ones of the deceased. We cannot speculate on the causes of this accident, or the Lion Air accident in October 2018, which only a full investigation will resolve. Comair will continue to monitor the various investigations by the relevant authorities and are in close contact with both Boeing and the SACAA.

The 737 MAX 8 is one of the most commonly used aircraft in many airlines today and by November 2018, 330 737 MAX 8 aircraft were in operation globally.

Our highly trained and experienced flight crew and engineers remain vigilant. If we receive information that requires us to reassess the situation, please be assured we will take appropriate action in the interests of the safety of our staff and customers. Safety remains our foremost priority and we will not compromise on the safety of our crew and our customers. 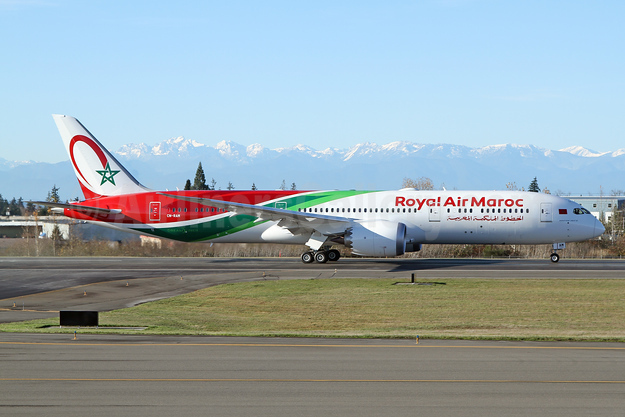 Royal Air Maroc has announced the launch of new service to Boston Logan International Airport. As part of ongoing efforts to enhance its network and better serve its customers, Royal Air Maroc will begin nonstop service between Logan International Airport (BOS) and Casablanca Mohamed V (CMN) and will be operated by 787-8 Dreamliner aircraft which features a two-class cabin with 18 Business Class fully lie-flat seats in a 2-2-2 configuration.

The new route will commence on June 22, 2019 with three weekly flights.

BOS will be the fourth nonstop route to the USA and the seventh to the Americas.

Boeing on December 21, 2018 delivered the first 737 MAX (CN-MAX, msn 60008) to Royal Air Maroc, which plans to use the fuel-efficient, longer-range version of the popular 737 jet to expand and modernize its fleet.

Morocco’s flag carrier – which welcomed its first 787-9 Dreamliner last week – will take delivery of three more 737 MAX 8s and three more 787-9s over the next few months as part of its strategic plan to strengthen its operations.

The 737 MAX 8 airplanes will build on the success of Royal Air Maroc’s fleet of Next-Generations 737s. The MAX incorporates the latest technology CFM International LEAP-1B engines, Advanced Technology winglets, and other airframe enhancements to improve performance and reduce operating costs. It also integrates engine technology to reduce the operational noise footprint of the airplane.

Boeing has also partnered with the industrial sector in Morocco, supporting the development of the kingdom’s aviation industry through initiatives such as the joint venture MATIS Aerospace that specializes in producing wire bundles and wire harnesses for airplanes. Boeing is also helping to educate local youth through partnerships with EFE-Morocco and the INJAZ Al-Maghrib association. 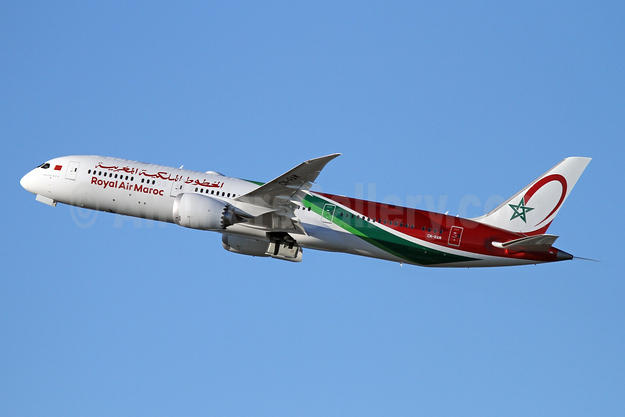 “We are particularly pleased to receive today our airline’s first 787-9, which will soon be joined by three other models from the same family. The choice of this airplane forms part of our strategy to continuously expand and modernize our fleet, and comes just a few days after the announcement of the invitation made to Royal Air Maroc to join the highly prestigious Oneworld Alliance. This will further strengthen our country’s and Royal Air Maroc’s leadership position on the continent,” says Abdelhamid Addou, CEO and Chairman of Royal Air Maroc.

In 2015, the airline was the first in the Mediterranean to fly the 787-8, the initial Dreamliner that offered 20 percent less fuel and fewer emissions. With the airplane’s exceptional fuel efficiency and performance, Royal Air Maroc planned new, non-stop routes such as Casablanca to Washington, D.C and to Miami.

With the larger, longer-range 787-9, Royal Air Maroc will be able to accommodate about 30 additional passengers (for a total of 302) and fly several hundred miles farther (up to 7,635 nautical miles or 14,140 km). The airline plans to deploy the 787-9 on routes such as Casablanca to Paris (Orly), to New York and to Sao Paulo.

The airline also debuted a new interior to enhance the flying experience. Passengers in business class will have three seat options, including ‘full flat’ and ‘full privacy’. All travelers will enjoy the Dreamliner’s larger windows, lower cabin altitude, smooth-ride technology, and other amenities.

For your new cabin, we wanted a precious and natural color, Amethyst’s color. A stone we can find easily in Morocco.

Later this month, Royal Air Maroc will begin modernizing its single-aisle fleet when it takes delivery of its first 737 MAX, the latest and more efficient version of the 737 airplane. The jet will join a fleet of more than 60 Boeing airplanes.

The carrier also uses Boeing Global Services to enhance its operations through offerings such as Software Distribution Manager, a cloud-based solution that ensures operational data flows securely to and from the airplane while it is on the ground.

Boeing’s relationship with Morocco goes beyond airplanes and services. The company has supported the development of the kingdom’s aviation industry through partnerships such as a joint venture named MATIS Aerospace that specializes in producing wire bundles and wire harnesses for new airplanes. Boeing is also helping to educate local youth through partnerships with EFE-Morocco and the INJAZ Al-Maghrib association. 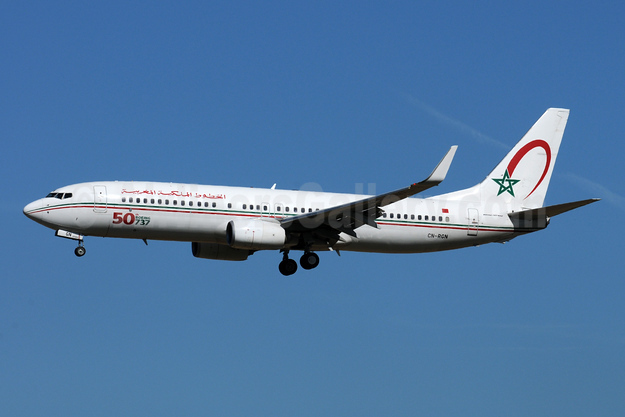 Its election as a oneworld member-designate was announced when the chief executives of the alliance’s 13 current member airlines, gathered in New York for their year-end Governing Board meeting. The announcement came just weeks before the alliance celebrates the 20th anniversary of its launch.

Royal Air Maroc is expected to become part of oneworld in mid-2020 when it will start flying alongside some of the biggest and best brands in the airline business. Its regional subsidiary, Royal Air Maroc Express, will join as a oneworld affiliate member at the same time.

As part of the alliance, Royal Air Maroc will offer the full range of oneworld customer services and benefits; more than 1 million members of the airline’s Safar Flyer loyalty program will be able to earn and redeem rewards on all oneworld member airlines and with its top-tier members able to use the alliance’s more than 650 airport lounges worldwide.

While Southern Africa’s Comair, which flies as a franchisee of British Airways, has been a oneworld affiliate member since the alliance launched in February 1999, Royal Air Maroc will be oneworld’s first full member from Africa — the only continent, apart from Antarctica, where the alliance hasn’t had a full member.

It will also be the alliance’s first new full-member airline signed since 2012, although Fiji Airways links to the alliance starting today as the first partner of oneworld connect, the first new membership platform since the alliance was established.

Today, Royal Air Maroc is the largest unaligned carrier in Africa, with a transformational strategy well underway to develop it quickly into a global airline and the continent’s leader in terms of both size and quality.

The airline’s schedule will add 34 new destinations and 21 countries to the oneworld map, taking the alliance’s network to 1,069 airports in 178 countries and territories.

Royal Air Maroc CEO Abdelhamid Addou said, “Royal Air Maroc is excited and honored to have been invited to become oneworld’s wings of Africa. We look forward to completing our flight on board speedily and smoothly so that we can offer the services and benefits of the world’s best airline alliance to our customers and across our own network as soon as possible. We will be flying alongside the finest collection of air carriers in the skies, while at the same time making it easier for people all over the world to reach our historic and beautiful part of the world. This undoubtedly represents one of the most significant landmarks in our airline’s 60-year history and on our journey to establish Royal Air Maroc as the leading airline of Africa.”

Royal Air Maroc’s first Boeing 787-9 Dreamliner (CN-RAM) has been painted at Paine Field in Everett, WA. The new jetliner is currently performing testing. We have the first looks of CN-RAM in the special livery. 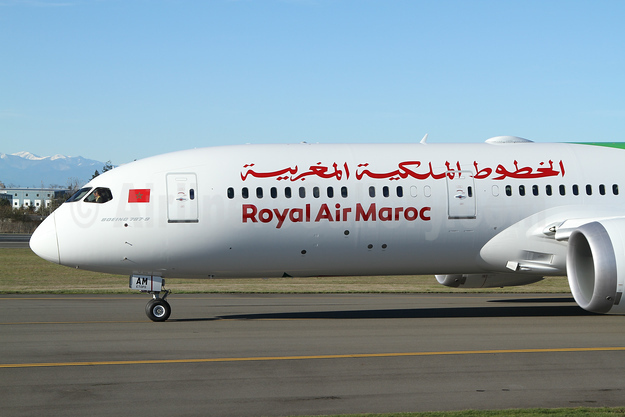 Royal Air Maroc will reveal a special livery for the two next aircrafts! This exclusive livery has been created to celebrate the first Boeing 737 MAX and first 787-9 Dreamliner of our fleet. 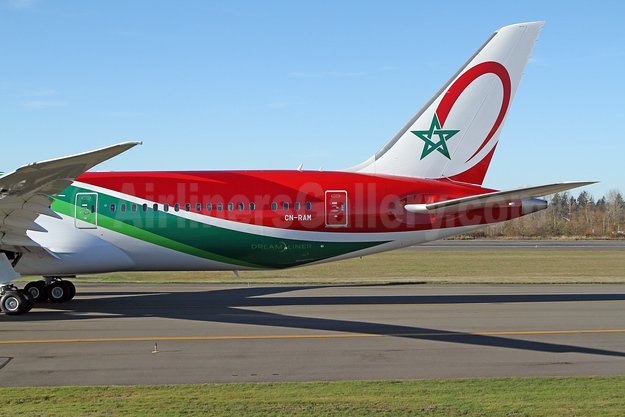 All photos by Nick Dean.