ANA Holdings, the owners of Japan’s largest airline, ANA, have announced that it has entered into a memorandum of understanding (“MOU”) with Virgin Orbit, the responsive launch and space solutions company that has announced a planned business combination with NextGen Acquisition Corp. II, and plans to procure twenty flights of the LauncherOne rocket and to lead the effort to provide funds and support for those orbital missions to launch from Japan’s Oita Prefecture.

The terms of the MOU call for ANA HOLDINGS and several of its partners to fund the manufacturing of a new set of the mobile ground support equipment used to prepare Virgin Orbit’s LauncherOne system for flight from a pre-existing runway, with a target of making Oita a LauncherOne-ready spaceport by as soon as the end of 2022, pending appropriate regulatory approvals in the United States and Japan.

Japan’s impressive aerospace industry has long been at the forefront of satellite technology innovation. However, the available launch services in Japan -and throughout all of Asia – have always been launched from fixed sites on the ground. Supported by ANA’s premier logistics and transport services, Virgin Orbit is set to change that by bringing air-launch to the Eastern Hemisphere for the first time in history.

By using a customized 747 as its flying launch pad, mobile mission control, and fully re-usable first stage, LauncherOne gains a substantial performance boost over a similarly sized ground-launched system. Additionally, the airplane’s ability to cover large distances between taking off and releasing the rocket provides both weather resiliency and direct-inject orbital flexibility that until now, has never been available on the Asian market.

Virgin Orbit’s flight-proven air-launch service provides a unique capability for ANA’s customer base in the booming commercial ecosystem for space in Asia. The number of space start-ups in Japan has increased since 2015, driven by increasing level of investment and government activities to energize and accelerate the private sector. The increasing amount of funding and investment in the space industry has encouraged start-ups to venture into space businesses, and legacy companies to expand their offerings – and launch is a critical enabler for those businesses and their future growth.

Virgin Galactic has made this announcement:

Virgin Orbit, Sir Richard Branson’s small satellite launch company, announced today that it has successfully completed a key drop test of its LauncherOne vehicle, the last major step in the development program of the company’s novel launch service. In the run-up to its first space shot, Virgin Orbit has completed a steady progression of test flights with its “flying launch pad” Cosmic Girl and LauncherOne vehicle — and today’s achievement marks the beginning of the company’s transition to its orbital test flight launch campaign.

On this flight, Virgin Orbit released a fully built, fully loaded — although inert — LauncherOne rocket from Cosmic Girl, a modified Boeing 747 that serves as the rocket’s carrier aircraft.  Today’s test flight began with a takeoff from the Mojave Air and Space Port at Mojave, CA, at 8:43 A.M. Pacific; the drop itself occurred at 9:13 A.M. Pacific from an altitude of 35,000 feet over a testing range at Edwards Air Force Base.  The primary purpose of the test was to monitor the few critical seconds just after release, to ensure the rocket and aircraft separate cleanly and to observe how the rocket freefalls through the air.

The drop test represents the last major step of a development program that began in 2015, focused not just on designing the LauncherOne vehicle but proving it out alongside the modified 747 that serves as the company’s carrier aircraft.

In Virgin Orbit’s final progression to launch, it has advanced on three parallel streams of work: First, the team needed to test LauncherOne on the ground, proving that its engines, tanks, pumps, software and all other elements can function together as integrated stages. That effort culminated in full thrust, integrated hotfires of both LauncherOne’s main and upper stages. At the same time, Virgin Orbit needed to complete its flight test program — which has now come to a close with today’s drop test.

Finally, the company also needed to build, assemble and test its first orbital test flight rocket. Later this month, Virgin Orbit will finalize that rocket’s assembly before handing it off to the company’s operations team for a rigorous series of checks and rehearsals leading up to its first launches to space later this year.

Virgin Orbit CEO Dan Hart: “Today’s test was a monumental step forward for us. It’s the capstone to a thorough development program not just for a rocket, but for our carrier aircraft, our ground support equipment, and all of our flight procedures. I’m extremely proud of the team for getting us to this point, and for their spectacular performance today. I’ve told them to take a few hours now to celebrate — our first launch campaign begins in the morning.”

Latimer said: “The whole flight went incredibly well. The release was extremely smooth, and the rocket fell away nicely. There was a small roll with the aircraft, just as we expected. Everything matched what we’d seen in the simulators well — in fact, the release dynamics and the aircraft handling qualities were both better than we expected. This was the best kind of test flight sortie from a test pilot’s perspective — an uneventful one.”

Virgin Orbit’s modified 747 aircraft enables the company to quickly transport its entire launch site to new locations around the world, launching each satellite from the optimal location. In addition to the Mojave Air and Space Port — the California launch site that will be home to the company’s first orbital launch as well as subsequent launches to high inclination orbits — other spaceports both new and established have announced that they are working to prepare themselves for future missions of LauncherOne, including the Launch and Landing Facility at the Kennedy Space Center in Florida, Spaceport Cornwall in the United Kingdom, the Taranto-Grottaglie Airport in Italy, and others.

Although Virgin Orbit is an American company and based in Long Beach, California, there’s no denying that the heart and soul of Virgin resides in the UK. It’s why the team is so proud to announce a new partnership with Spaceport Cornwall and the UK Space Agency to conduct the first ever flights to space from British soil.

Virgin Orbit revealed its plans to conduct orbital rocket launches from Cornwall Airport Newquay by 2021. To reach space, Virgin Orbit has designed and built a one-of-a-kind air-launch platform that uses a modified former-Virgin Atlantic Boeing 747-400 aircraft aptly named Cosmic Girl. Cosmic Girl carries a LauncherOne rocket under her left wing, and deploys the rocket around cruising altitude before it jettisons off to space with a customer’s small satellite tucked away in its fairing.

Air-launch comes with a number of benefits over the typical vertical launch you’re probably used to seeing. Most notably, it gives Virgin Orbit the freedom to bypass the traffic jam headaches at established launch ranges. Plus, the team can kick off launches from the UK relatively quickly, since most modern airports like Newquay are already equipped to support the system. There’s no need to spend tens of millions and a decade or more building out a brand new launch pad.

All images by Virgin Orbit. 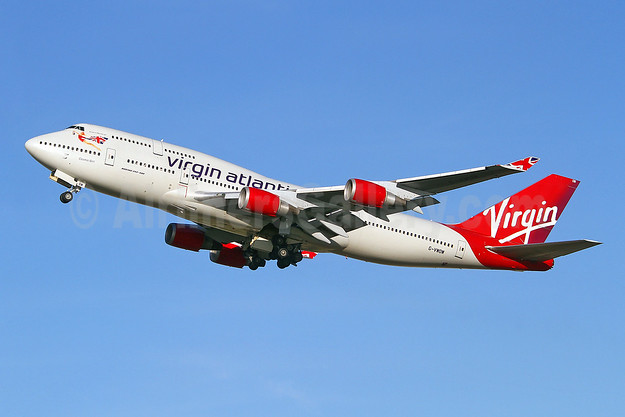