Air Transport Services Group, Inc. (ATSG), the world’s largest lessor of freighter aircraft, has committed to a total of 29 Airbus A330 Passenger-to-Freighter (P2F) conversion slots with Elbe Flugzeugwerke (EFW), center of excellence for Airbus freighter conversions and a joint venture between ST Engineering and Airbus.

The commitment of 29 A330P2F reflects a strategic step by ATSG to diversify its existing in-service fleet of 117 aircraft with the addition of next generation wide-body freighters.

“The A330-300 passenger-to-freighter conversion is a natural next step for ATSG as it is an excellent complement to the Boeing 767-300 medium wide-body freighter, which has long been the freighter of choice for the e-commerce air cargo market,” stated Mike Berger, chief commercial officer of ATSG. “The availability of feedstock combined with impressive cargo capacity make the A330 a very attractive option for conversion and will enable ATSG to continue to meet the demands for full-capacity freighters long into the future. The customer response to the news that we will have A330-300 freighters available for lease has been exceptionally strong, and we already have customer deposits toward future leases for half of these 29 converted freighters.” 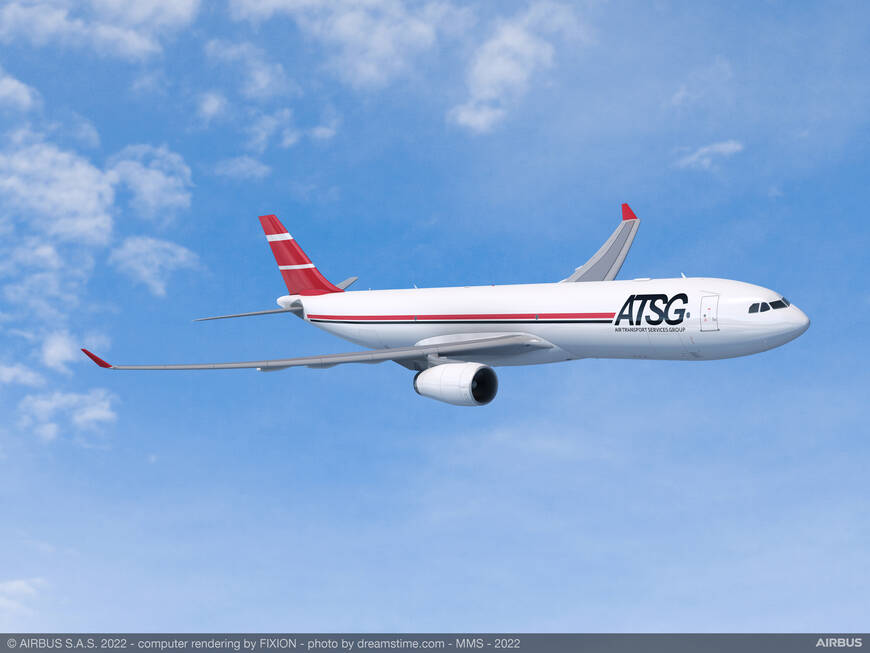 A330P2F conversions for ATSG will be performed from mid-2023 through 2027 mainly at EFW’s facility in Dresden, Germany 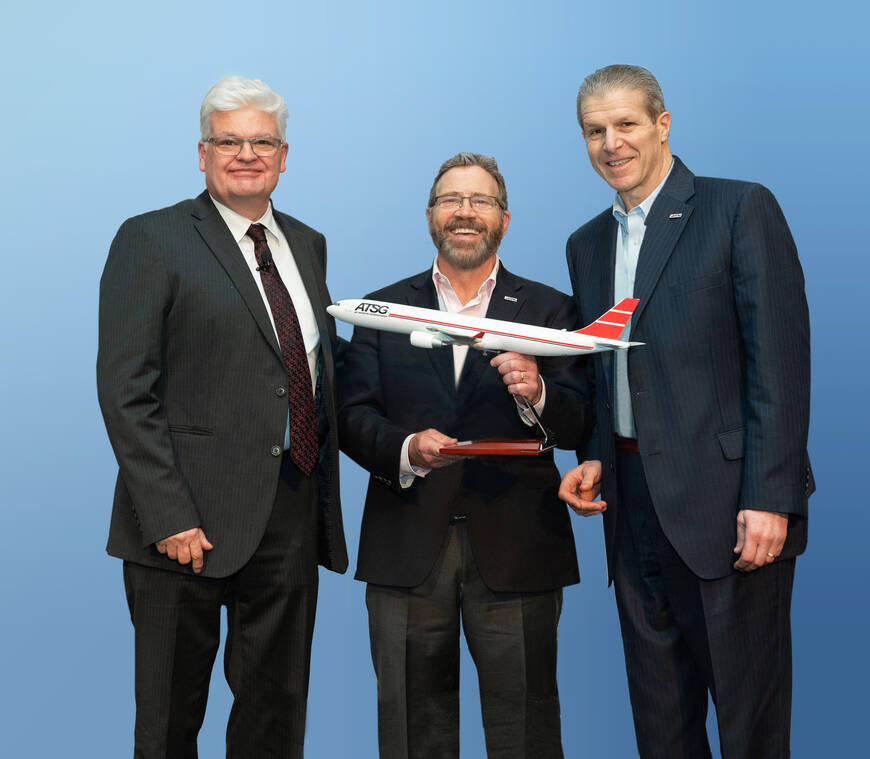 The A330P2F conversions for ATSG will be performed from mid-2023 through 2027 mainly at EFW’s facility in Dresden, Germany, and also at ST Engineering’s conversion sites in China. Multiple conversions will be carried out in parallel.

Similar to the latest conversion programmes, A321P2F and A320P2F, the A330P2F program is a collaboration between ST Engineering, Airbus and EFW, which is leading the overall programme as well as marketing & sales efforts. To meet the rising demand for freighter conversions, ST Engineering and EFW are setting up new conversion sites in China and the U.S. this year, and are ramping up conversion capacity for all their Airbus P2F programmes to about 60 slots per year by 2024.

Elbe Flugzeugwerke GmbH (EFW) is a joint venture between ST Engineering and Airbus.

Air Transport International (ATI) made this announcement on social media:

We are excited to announce our new livery is ready to fly! This 767 with tail number N255CM arrived at ILN and will soon be departing to deliver air cargo across the U.S.!

The modified livery (new titles) is really a modified version of the previous livery that was adopted by ATI in 2013 when it incorporated the aircraft of Capital Cargo International Airlines. Capital unveiled this basic globe livery in 2011.

Amazon continues to invest in ways to provide fast, free delivery for customers.

Today, the company announced an expansion of its partnership with Air Transport Services Group, Inc. (ATSG) by leasing an additional 10 aircraft to support Amazon’s growth. Amazon previously leased 40 Boeing 767 freighter aircraft in 2016, 20 of those with ATSG, all of which are now flying serving customers in the Amazon Air network.

The 10 additional cargo planes will consist of Boeing 767-300 aircraft, will be operated on Amazon’s behalf by an ATSG airline, and will join the air cargo operation over the next two years.

Amazon Air’s operation launched in 2016 supporting package delivery to the rapidly growing number of customers who love fast delivery, great prices and vast selection. With advanced algorithms and software used for capacity and route planning, the Amazon Air operation can transport hundreds of thousands of packages per day. In addition, with Amazon’s dedicated air network, Amazon is able to deliver packages to its customers faster – 40 aircraft are flying in and out of gateway operations at over 20 airports, making two-day shipping possible almost anywhere in the U.S.

Amazon will open a new Regional Air Hub next year at Fort Worth Alliance Airport, and the Air Hub at the Cincinnati/Northern Kentucky International Airport will open in 2021. Recently, Amazon also announced a gateway operation to launch in Wilmington, Ohio, in 2019 as well as an expanded operation in Rockford, Illinois. Since its launch, Amazon’s air cargo operation has invested millions of dollars and created thousands of new jobs at locations across the U.S.

Amazon has launched several initiatives to ensure fast delivery speeds and supply chain capacity for its customers, including its Delivery Service Partner program, Amazon Flex, the company’s mobile application that allows individuals to sign-up, be vetted and begin delivering for Amazon, a dedicated network of over 10,000 trailers to increase trucking capacity and, now, the expanded fleet of air cargo planes. These efforts join Amazon’s robust worldwide network of more than 185 fulfillment centers where the company uses high-end algorithms, robotics, machine learning and other technological innovations to increase delivery speeds for customers. Amazon is now bringing the same technological expertise to efforts in the transportation space to increase shipping capacity for customers. 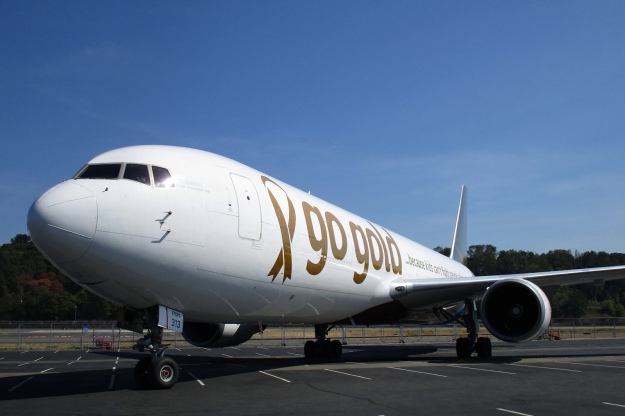 This special livery is a vinyl wrap that was applied at ATI’s hub in Wilmington, OH.  The aircraft was flown to SeaTac on Sunday for finishing touches and then flown to BFI on Labor Day.

The special livery is expected to survive for about 30 days. 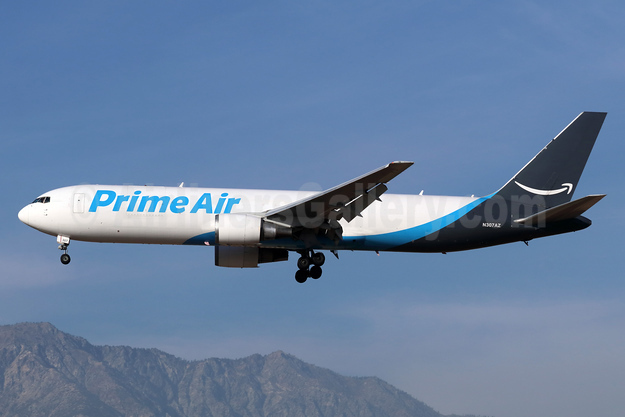 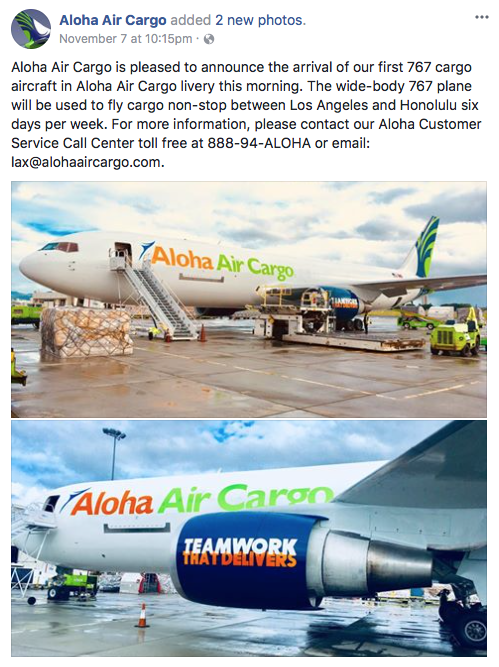 ATI-Air Transport International (Little Rock) has apparently decided to keep the Capital Cargo International Airlines (Orlando) 2011 livery alive. Like the United Airlines-Continental Airlines merger, the surviving airline has adopted the color scheme of the airline that was closed down. The airline has not yet announced this decision.

In April 2013 the pictured Boeing 757-2G5 (F) converted freighter was rolled out of the paint shop at Wilmington, Ohio in the Capital Cargo brand but now with ATI-Air Transport International Airlines titles.

The ATI version now includes red and dark blue stripes below the window line (above). The Capital Cargo version had a single red stripe (below).

Top Copyright Photo: Tony Storck/AirlinersGallery.com. This former National Airlines (5th) aircraft was previously operated as N151GX and never was operated on the  Capital Cargo certificate. It was delivered to ATI on March 14, 2013.

Bottom Copyright Photo: TMK Photography. Former United Airlines Boeing 757-222 (F) N531UA (msn 25042) was the only 757 to wear the new 2011 color scheme with Capital Cargo. Notice the differences with the cheatlines. N531UA is pictured operating to Memphis. 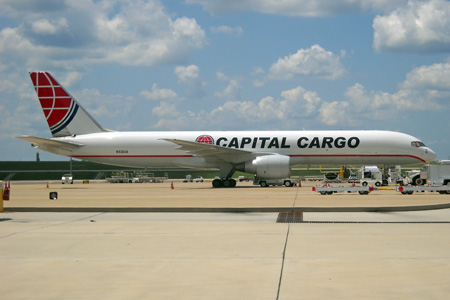 “We made a major investment in our combi business with the U.S. military, placed more of our Boeing 767 and 757 freighters with DHL, and completed the merger of two of our airlines during the first quarter,” said Joe Hete, President and Chief Executive Officer of ATSG. “The results were significant increases in our net income and in our Adjusted EBITDA, compared with the year-earlier quarter. Our baseline business remains solid, and we are moving quickly to capture the rest of the $5 to $6 million in merger synergies we projected a few months ago.”

Copyright Photo: Tony Storck. The three remaining McDonnell Douglas DC-8s in service have been delayed in their retirements until later this year as newer aircraft come on line. A fine study of DC-8-62 (F) N41CX (msn 46129) arriving at Baltimore/Washington.

“This merger is the most significant of a number of steps we are taking throughout ATSG to better fit our airline overhead and operating cost structures to the airline operations we have today, and expect to add in the future,” Hete said. “Dennis Manibusan and his teams in each company have worked hard to complete this process, and I applaud their efforts. The larger scale and strength of the new combined ATI they have created will be better prepared to support ATI’s customers, including DHL and the U.S. military, and attract new business in the months to come.”

ATSG said it anticipates that its subsidiary, Cargo Aircraft Management (CAM), will take delivery of one of the three 757 combi aircraft in December 2012, and the other two in early 2013.

Joe Hete, President and CEO of ATSG, said, “The purchase of these three 757 combis from National, plus the one 757 combi we already own, will complete our commitment to replace our four McDonnell-Douglas DC-8 combis with more modern fuel-efficient aircraft that better meet the requirements of our principal combi customer, the U.S. Military’s United States Transportation Command (USTRANSCOM). We look forward to providing USTRANSCOM with the improved operating performance and lower costs of the 757, as well as its greater passenger capacity. We are proud to be USTRANSCOM’s sole combi operator, serving primarily remote installations around the world that rely on the combi’s unique cargo and passenger transport capabilities.”

The 757 combis have a 34 percent lower fuel burn, ten more passenger seats and the same number of cargo pallet positions as the DC-8 combis they will replace. The combis will be owned by CAM and leased to and operated by ATSG’s airline subsidiary Air Transport International (ATI), under ATI’s contract with USTRANSCOM. Along with the three aircraft, CAM is also purchasing a spare 757-200 engine and some ancillary aircraft equipment from National.

As part of its fleet modernization program, prior to ATI’s latest combi contract award from USTRANSCOM that took effect in October 2012, CAM purchased a Boeing 757-200 for combi conversion. That aircraft is undergoing certification testing for the Federal Aviation Administration, and is due to complete that process and begin USTRANSCOM service early next year. All three of the National combis were designed and modified to meet or exceed the same FAA and USTRANSCOM requirements, including ETOPS (Extended-range Twin-engine Operational Performance Standards) certification essential for service to USTRANSCOM’s combi destinations.

Upon the retirements of the four DC-8 combis, ATSG’s fleet will consist entirely of 757-200, 767-200 and 767-300 aircraft, all of which require only two crew members, and which share a common pilot type rating.

ATSG noted that, as a result of its decision to acquire one of the 757 combis in 2012, it has adjusted its previously disclosed guidance for aircraft-related capital expenditures in 2012 and 2013 to approximately $170 million and $95 million, respectively.