Eastern Airways has made this announcement:

Eastern Airways is re-entering the E-Jet market during January with the initial return of the Embraer 170 aircraft type to its fleet.

The UK regional airline is seeing significant growth in the ad-hoc charter market for 70-100 seat jets, and the first of these aircraft will be delivered later this month.

The Embraer 170-100 LR jet has a range of over 1,800 miles and is powered by two General Electric CF34-8E 5A1 jet engines with a maximum cruise speed of 553 mph.  It brings routes such as Norwich – Aberdeen within an hour’s flight time, and most European destinations, including the Mediterranean, to a little over two hours.

As part of the expanding E-Jet fleet, the regional operator will also add three of the larger Embraer 190 during the year, a type already commonly operated by both UK and European airlines. This will offer expanded larger capacity scheduled and charter opportunities to fit the airline’s growth plans, complementing the Embraer 170.

Both the Embraer 170 and 190 have the ability of offering steep approaches to restricted airports, good short-field performance and long-range operations making them one of the most flexible aircraft in the up to 100-seat market.

Yorkshire and Humber based Eastern Airways was formed in 1997.  As well as operating scheduled flights, the airline also specialises in providing customer-focused charter services for the energy industry, corporate and sports contracts and ad-hoc charters.

January 7, 2019 saw the official launch of a new double-daily direct air service to London City Airport from Newcastle in association with Flybe.

This gives Newcastle Airport a second and faster, more convenient London travel option for those heading to the City or Central London.

With business-focused morning and evening departures at 8:05 am and 5.50 pm, returning at 9:45 am and 7.30 pm on weekdays, and a single Sunday evening service, the time saving compared to rail or road will meet the needs of many north-east commuters.

This is achievable by arriving into London City Airport, which is the only London airport conveniently located close to the heart of the capital.

All photos by Eastern Airways.

Flybe has announced it will discontinue all service to Sumburgh Airport in Shetland on January 8, 2018 due to “disapointing numbers”.

Flybe teamed up with Eastern Airways to compete against its former partner Loganair on September 1, 2017 to Sumburgh in the Shetland Islands. 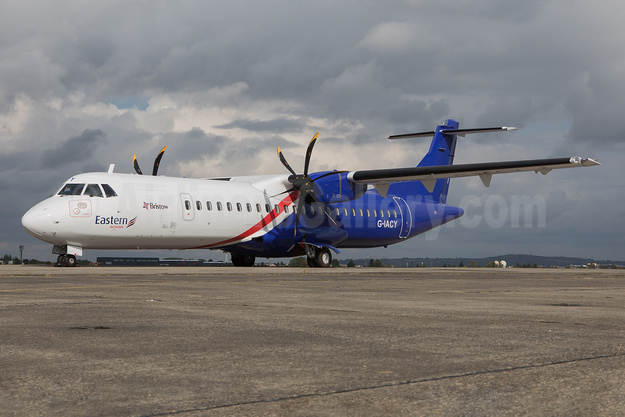 Eastern Airways (Humberside) has signed a new codeshare agreement with Wideroe (Bodo) which will provide UK travellers greater Norwegian connections via Aberdeen and Newcastle, along with improved access to the Norwegian carrier’s comprehensive network of Scandinavian destinations.

As part of the codeshare partnership, Eastern Airways “T3” flight code will continue to be placed on services between Aberdeen and Stavanger and Newcastle and Stavanger. It will also be added to Aberdeen – Bergen services, which are bookable on Eastern Airways website and via travel agents from today (November 17).

Onward connections in Norway are also available on Wideroe’s network, including those to Haugesund, Kristiansand, Skien, Kristiansund, Molde and Sandefjord. In turn, Wideroe will be able to offer connections on Eastern Airways’ network to Norwegians travelling onwards within the UK.

Wideroe is Scandinavia’s largest regional airline operating to more than twice as many airports in Norway than any other airline. It flies to 48 international and domestic destinations.

Humberside Airport based Eastern Airways has been providing flights from Aberdeen since 1997 and Newcastle since 2003.

Eastern Airways (Humberside and Aberdeen) is expanding the size of its SAAB 2000 fleet to nine aircraft with the introduction of an extra aircraft.

The regional airline, which provides a comprehensive domestic network of scheduled services, and is the UK’s leading provider of fixed wing air services for the oil and gas industry, will see the Saab 2000 entering service in the coming weeks.

The Swedish manufactured 50-seater SAAB 2000 is one of the world’s fastest turbo-prop aircraft with its two Rolls Royce engines producing a cruising speed of 425 mph, and low fuel burn due to its efficiency.

This latest addition will be assigned to its charter services operating for the oil and gas industry, which also includes the recently awarded major contract with BP flying between Aberdeen and Sumburgh in the Shetland Isles.

Paul Alcock, Eastern Airways’ managing director, said: “The SAAB 2000 is an extremely flexible aircraft that can operate on both short and longer runways, which is ideally suited to our long term charter services for the oil and gas industry.  The aircraft type is also used on our scheduled network and to European destinations for ad-hoc charters.”

SAAB 2000 aircraft were first introduced to Eastern Airways fleet in 2004 and the latest addition increases the fleet to nine.  The airline is also the largest operator of British Aerospace Jetstream 41s in the world with a fleet of 18.  The remainder of the fleet comprises of four regional jets, including two Embraer 135 and two Embraer 145 aircraft.

A network of services across to 20 airports in the UK, Norway and France is operated by the airline on a fleet of 31 regional aircraft (see route map below).

In January 2014, the airline started a new scheduled service between Leeds Bradford and Southampton and also launched its third domestic route in France with flights between Lorient and Lyon.

The UK’s second largest regional airline will offer three flights each weekday in each direction, as well as a Sunday service to ensure business communities in Yorkshire and on the south coast of England have a high frequency air service enabling them to do business.

A convenient early morning departure from Leeds Bradford at 6.50 am allows for a full day in Southampton and south coast region before returning back to Yorkshire just after 5 pm or 7.40 pm on the same day.

Eastern Airways has been providing scheduled flights from Leeds Bradford since 2003, and also provides a choice of daily weekday services from the airport to Aberdeen.

A dedicated fast track security channel is offered at Leeds Bradford and Southampton airports for all Eastern Airways passengers to avoid any queues at security search, enabling the airline to close check-in just 30 minutes before the departure time.  Complimentary drinks and snacks are offered on board the aircraft and passengers are not charged for check-in, baggage or choice of seat.

A network of services across to 20 airports in the UK, Norway and France is operated by the airline on a fleet of 30 regional aircraft.