Starting November 28, 2017, Sunrise Airways of Haiti will launch its first flight from Port-au-Prince to Curaçao.

The Haitian carrier issued this statement:

Previously the carrier started four flights a week service to Orlando on October 18, 2017.

The new flag carrier will also commence Port-au-Prince and Cap-Haitien flights to Miami starting on December 16, 2017. 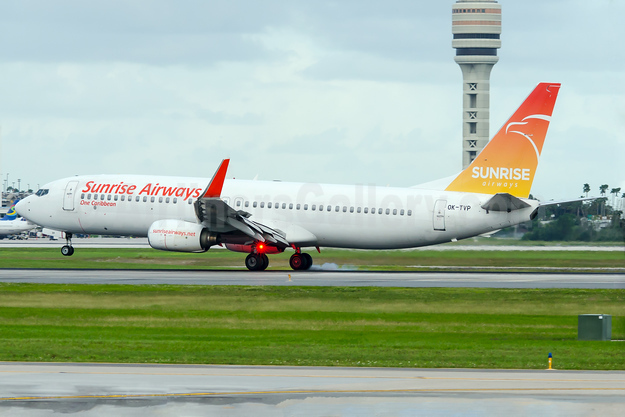 Southwest Airlines and the Discovery Channel are teaming up once again to bring television’s most anticipated summer event, Shark Week, to new heights. Southwest revealed a Shark Week- themed 737-700 aircraft, the pictured 737-7H4 N944WN (msn 36659), with an all new, larger-than-life underwater scene depicting five shark species along the fuselage. The plane will fly the skies as part of the Southwest fleet through August 31, 2017, as millions tune in to Discovery’s Shark Week airing July 23 through July 30, 2017.

Customers and Shark Week fans who spot the Shark Week plane throughout the summer are encouraged to take a photo and share it with @SouthwestAir and @SharkWeek, using the hashtag #SharksTakeFlight.

While Shark Week fans anxiously await the July 23 premiere of Shark Week, Southwest Customers are getting in on the jawsome action early. Continuing throughout the summer, Customers onboard WiFi-equipped aircraft can enjoy a pre-premiere episode of African Shark Safari through Southwest’s onboard entertainment portal via the Shark Week ondemand Channel. Customers flying during Shark Week can tune-in live via the entertainment portal live TV on Discovery Channel July 23 through July 30. Southwest and Discovery will also host a surprise takeover on a special flight to kick off Shark Week!

This exciting partnership with Discovery’s Shark Week is an opportunity to celebrate the carrier’s newest international destination, Grand Cayman, which Southwest serves with nonstop flights from Ft. Lauderdale. Want a bite of the nonstop action? Southwest and Discovery will send a winner and three guests on an adventure of a lifetime through the Dare to Dive Sweepstakes.  Customers and Shark Week fans can enter for a chance to win the Dare to Dive sweepstakes which includes roundtrip Southwest air travel for four (Government-imposed per passenger travel taxes of up to $150 per person are not included and are payable by each of winner and guest prior to travel), a $2,000 Ritz Carlton gift card, and a $1,000 Visa gift card for an aquatic adventure of the winner’s choosing. 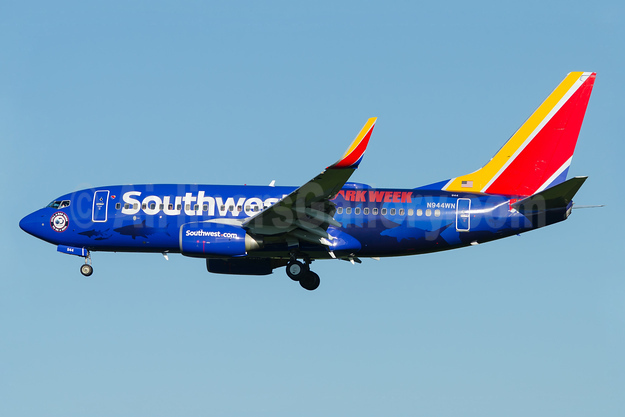 Brasilia serves as a hub for TAM’s domestic operations. This increase in international flights to Brazil’s capital, Brasilia, directly benefits passengers departing from the U.S., providing convenient access to over 40 Brazilian destinations, specifically connecting the U.S. to Northern Brazil.

TAM Airlines will operate the route from MCO using Boeing 767-300 ER aircraft (above). The aircraft is configured with 191 seats in Economy class and 30 in Premium Business class, featuring seats that recline up to 180 degrees full flat.

LAN Peru will operate the route on an Airbus A319 aircraft, which seats 126 passengers in Economy class.

Southwest Airlines (Dallas) has announced new nonstop service from Ronald Reagan Washington National Airport (DCA) to Orlando, Florida beginning on November 1. Orlando will be Southwest’s third Florida destination from DCA, where it is the second largest carrier as measured by passengers carried. Southwest will now offer flights to 17 nonstop destinations from this convenient downtown airport.

Also on Nov. 1, Southwest will continue its commitment to the Sunshine State by increasing the number of daily flights to twice daily service between Austin, Texas, and Ft. Lauderdale.

In Austin, the carrier continues adding new destinations including already announced nonstop service starting June 28, 2015 to Santa Ana/Orange County and St. Louis. In addition to the increased number of flights serving Customers traveling to and from Ft. Lauderdale, the carrier will add nonstop service this November to Boston (Logan), Seattle/Tacoma, and will add an additional nonstop flight to the New York area (via Newark.) The carrier began serving Austin in 1977 with six daily flights, and by the end of 2015 it will operate more than 60 departures a day to nearly 30 destinations across the United States and Mexico.

This week, Southwest also renewed its commitment to the Greater Orlando Aviation Administration by investing $9.5 million in a renovation and expansion of the airline’s Maintenance Hangar and Parts Stores Facility. Additionally, the carrier is also committed to bringing more international travel options to Florida travelers with a new international terminal located at the Ft. Lauderdale/Hollywood International Airport. With scheduled completion in 2017, the terminal will have five gates, a new security checkpoint, and new concessions for travelers.

Photos: Orlando International Airport. The inaugural flight was operated with the pictured Airbus A330-243 PR-AIZ (msn 527).

Norwegian Air will offer nonstop service between Orlando and Oslo two-days-a-week, Thursdays and Saturdays, with connections to over 94 locations in Europe and Thailand.

Details of WestJet’s new nonstop twice-weekly service (Thursdays and Sundays) between Toronto and Myrtle Beach, South Carolina, are as follows:

Further service expansion began April 29, when WestJet launched new nonstop daily service between Calgary and Dallas-Fort Worth, offering more connectivity than ever to the United States through WestJet’s code-share agreement with American Airlines. Within Canada, WestJet is also increasing the number of flights between Toronto and Vancouver, Edmonton, Calgary, Saskatoon and Regina, and will introduce new nonstop service between Toronto and Fort McMurray. The airline will also increase to two flights daily from one between Calgary and Los Angeles, and to 11 from seven flights weekly between Toronto and Orlando.

Southwest Airlines currently still operates the Boeing 737-300 and is now likely to be the longest operator of the type when retired.

Bottom Copyright Photo: Keith Armes. Originally the Boeing 737-300 fleet wore the 1975 Allegheny Airlines livery. Boeing 737-3B7 N351AU (msn 22951) is pictured at Orlando, a popular destination for the new type in the early years. Later the type was relegated to shorter feeder routes.

The new flight will feature American’s Boeing 757-200 aircraft with 22 First Class and 166 Main Cabin seats. As part of American’s fleet renewal effort, the airline is currently upgrading its Boeing 757 aircraft used on domestic routes to add style and comfort. Modifications include new Main Cabin and First Class seats, new sidewalls that give the interior a lighter and brighter look, and new LCD monitors to enhance inflight entertainment viewing.

Actors Brian Dietzen, who plays “Jimmy Palmer” on the hit television drama series “NCIS,” and John Ratzenberger, who played “Cliff Clavin” on the award-winning sitcom “Cheers” – and who has voiced a character in each of Disney Pixar’s feature films, including the upcoming “Brave” – helped welcome a very special group of American heroes as the first customers on the inaugural flight.

Nine World War II veterans from the Los Angeles area traveled on the inaugural flight in conjunction with American’s relationship with the Honor Flight Network. These distinguished veterans will receive a VIP tour of the World War II Memorial that is dedicated to their bravery and will visit other monuments that honor our veterans and members of the armed services. Dietzen and Ratzenberger spent time with these heroes on the transcontinental flight.