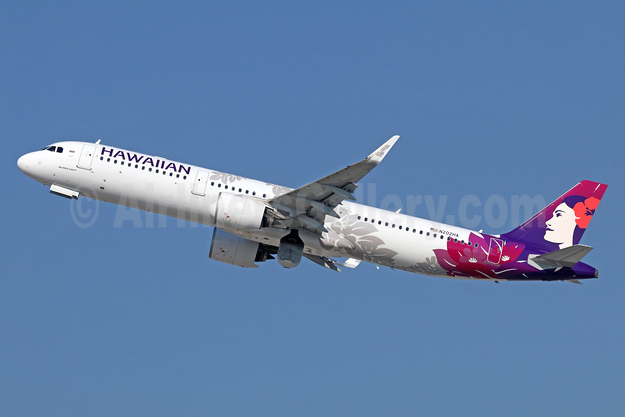 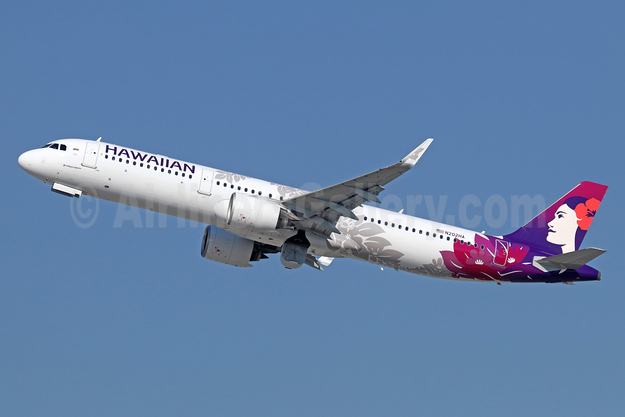 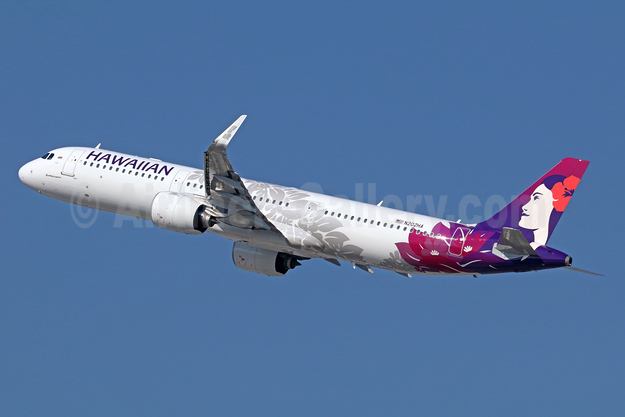 Hawaiian Airlines (Honolulu) will add a new Airbus A321neo connecting its Honolulu hib with Long Beach, CA. The new route will commence on May 31, 2018 per Airline Route.

Hawaiian Airlines is adding additional service to the San Francsico Bay for the next summer season.

The carrier will add a second daily flight on the Honolulu – San Francisco with the new Airbus A321neo starting on May 25, 2018 per Airline Route.

The airline is also starting Kona – Oakland service starting on May 26, 2018 also operated by the new Airbus A321neo.

In other news, Hawaiian is adding a second daily flight on the Honolulu – Tokyo (Narita) route commencing on August 1, 2018. Hawaiian Airlines, the only U.S. carrier to offer travelers complimentary meals on all transpacific flights for over three decades, is cooking up something new. Hawai‘i’s hometown carrier will introduce new elements in both food and fashion tomorrow by launching a new meal program for its North American routes while debuting uniforms by local designer Sig Zane across its network.

Guests in the main cabin on Hawaiian flights between Hawaii and Western U.S. gateway cities will be treated to complimentary meal service exclusively created for the airline’s new Pau Hāna Café brand. The new service, based on guest feedback, is being launched in preparation for the roll-out of Hawaiian’s new fleet of Airbus A321neo aircraft early next year.

“Our complimentary in-flight meals have been a hallmark of the authentic and warm hospitality our guests have enjoyed for decades,” said Avi Mannis, Hawaiian Airlines’ senior vice president of marketing. “In adapting our meal program for the narrow-body A321neos, we found that our guests highly value opportunities to interact with our in-flight crew, so we added more service touch-points during their travel.”

The Pau Hāna Café, branded meals made exclusively for the airline, consists of a continental breakfast box for brunch and hot sandwich and side for lunch. Pau Hāna, a Hawaiian term for “finished work,” is a time to relax and unwind after a long workday.

The meal service will be followed by coffee and a sweet treat for dessert. A parting Mahalo service features the carrier’s popular Koloa Breeze cocktail, featuring Koloa Rum from the Island of Kauaʻi, and our signature Pau Hāna snack mix (above).

The updated meal program coincides with the debut of new uniforms for over 5,000 of Hawaiian’s front-line staff globally. The pieces by Hilo-based designer Sig Zane were unveiled during last year’s HONOLULU Fashion Week as employees from Airport Customer Service, Cabin Service, Cargo, In-Flight, Line Service, Maintenance, Ramp, and Supply walked the runway. The print’s theme, Kū Mākou, or Together We Stand, is represented by the lehua blossom and ‘ohe kapala (bamboo stamps) through every piece of each work group’s uniform, as applied in different scales and tonalities to prints, linings and woven elements.

In related news, Hawaiian Airlines will now introduce the new Airbus A321neo into revenue service on December 19, 2017 between Honolulu and Kona as flight HA118 per Airline Route.

Hawaiian Airlines on November 16, 2017 welcomed to Honolulu the first of 18 Airbus A321neo aircraft (A321-271N N202HA, msn 7917) that will shortly begin flying between Hawai‘i and the U.S. West Coast. The company’s new fleet of single-aisle aircraft will offer guests non-stop flights to more islands, starting with service to Kaua‘i, Maui, and the Kona Coast on the Island of Hawai‘i.

Hawaiian held a blessing ceremony for its first A321neo, “Maile,” named after a vine native to Hawaii and traditionally used for lei making and celebrations. Fittingly, Hawaiian’s A321neo is adorned with a new livery featuring a silver maile lei wrapping around the fuselage as the carrier’s “Flower of the Sky” Pualani icon gazes forward from the tail of the aircraft.

Hawaiian’s inaugural A321neo flight is scheduled for January 8, 2018 on the carrier’s existing Kahului-Oakland route. New A321neo service between Kahului and Portland will launch on January 18, 2018. Hawaiian’s seasonal summer wide-body service currently offered between Līhu‘e and Oakland will resume April 11, 2018 as a daily A321neo flight. Daily service between Kona and Los Angeles launches March 11, 2018 with wide-body aircraft before converting to the A321neo in the summer.

Powered by Pratt & Whitney PurePowerr® Geared Turbofan™ (GTF) engines and incorporating the latest in aerodynamics, the A321neo is the quietest and most fuel efficient aircraft in its class, leading to 16 percent lower fuel burn and carbon emissions over previous generation aircraft.

Dunkerley’s departure will end 15 years of leadership during which the company executed a remarkable turnaround to become one of the world’s most successful airlines. During Dunkerley’s tenure, Hawaiian Airlines successfully embarked on a bold Asia-Pacific growth strategy, adding service to Tokyo, Osaka and Sapporo, Japan; Seoul, South Korea; and Beijing, China as well as new routes to Auckland, New Zealand; Sydney and Brisbane, Australia; and New York City.

Since December 2002 Hawaiian has doubled the number of passengers flown annually, to 11 million. Over the same period the company’s gross revenues have increased four-fold, to $2.64 billion and its employee count has doubled, to 6,600. Its share price has risen from a 52-week low of 29 cents in 2003 to a high of $60.90 over the last 52-week period.

“This has been a heart-wrenching decision,” said Dunkerley, who joined Hawaiian in December 2002.  “I am so proud to be associated with this company and our employees. Hawaiian Airlines is truly in a class of its own, distinguished by all the employees I am honored to call my colleagues. At the same time, I am excited by the new opportunities ahead of me and I am confident that Peter Ingram and the team will lead the company to further success.”

Chairman of the Board Lawrence Hershfield thanked Dunkerley for turning Hawaiian from a struggling local carrier to a global industry leader and also for ensuring a smooth leadership transition. “Mark’s abilities as an airline chief executive are evident in the phenomenal growth and success of Hawaiian Airlines over the course of his leadership,” said Hershfield. “It is also a measure of his commitment to Hawaiian that in extending his tenure for 14 months he gave the Board time to consider options for his prospective replacement.”

Continued Hershfield: “Peter Ingram has been an important part of Hawaiian Airlines’ growth and success for the past 12 years, and we are confident in his deep knowledge of the airline, the industry and the community.”

“I am humbled by the Board’s confidence in me and excited by the opportunity to lead an incredible team as Hawaiian’s CEO,” said Ingram. “Mark has been an inspirational leader for our company and mentor to me and many others and I will be proud to continue pursuing the strategy for growth and success that we have been following for the last several years.”

All photos by Hawaiian Airlines.

The A321s will help the carrier replace the eight remaining Boeing 767-300s.

The first A321 daily route will be between Kahului, Maui and Portland, Oregon starting on January 18, 2018.

The airline previously issued this statement:

Hawaiian Holdings, Inc., the parent company of Hawaiian Airlines, Inc., reported its financial results for the third quarter of 2017.

“The third quarter’s excellent results add to the great year we are having,” said Mark Dunkerley, Hawaiian Airlines president and CEO.  “Apart from the helpful environment characterized by low fuel prices, manageable industry capacity and strong demand for the Hawaii vacation, our team is doing a terrific job improving the company and widening the gap between us and our competitors.”

In addition, the Company repurchased approximately 1.1 million shares of common stock for approximately $46.2 million in the third quarter, which leaves $49.5 million remaining under its share repurchase program.

The Company has revised its guidance range for economic fuel cost per gallon for the full year ending December 31, 2017 due to higher than expected year-to-date fuel costs and the forward fuel price curve as of October 9, 2017. The Company is also providing a guidance range for operating revenue per ASM and has adjusted its guidance ranges for cost per ASM excluding fuel and special Items, ASMs, and gallons of jet fuel consumed for the full year ending December 31, 2017.