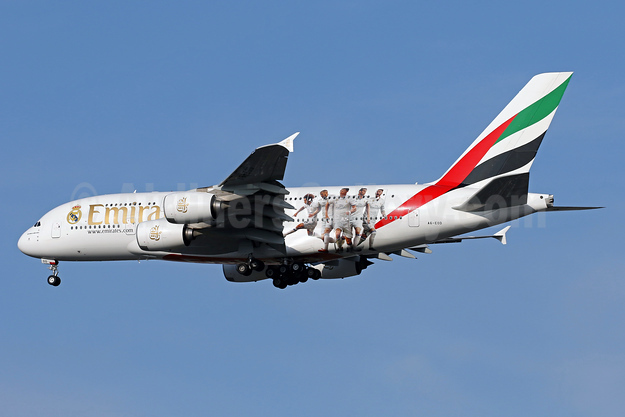 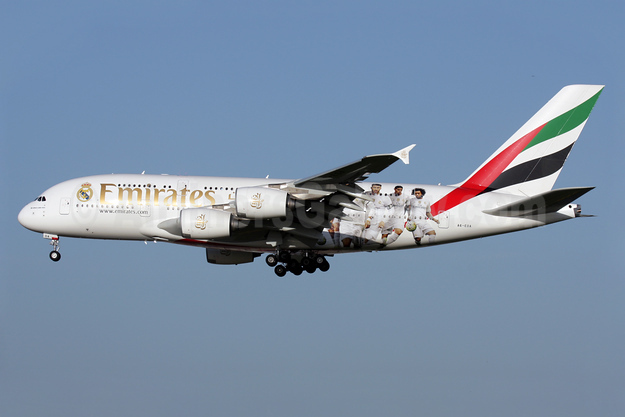 Emirates (Dubai) has expanded its relationship with the Real Madrid Football Club with this unique Airbus A380 logo jet.

Additionally Emirates previously announced it will deploy its Airbus A380 to even more destinations across its network in 2016 – reinforcing its commitment to provide an enhanced onboard experience for its passengers.

Flying the world’s largest fleet of A380 aircraft at 71, Emirates continues to set the pace for A380 deployment. Since Emirates launched is first A380 flight in 2008, the aircraft has flown over 42 million passengers, covering more than 630 million kilometers.

Emirates’ inaugural A380 flight to Birmingham, EK39 will depart Dubai at 07:35 and arrive at 12:20 and will be operated in a two-class configuration. EK40 will depart Birmingham at 14:20 and arrive in Dubai at 00:35 (+1). The addition of an A380 on this route follows the recent introduction of Emirates’ third daily flight to Birmingham, as well as the airline’s milestone 15th year of operations to the city being celebrated this week.

In Taiwan, Emirates will up-gauge its service to a two-class A380 service, representing a 44 percent increase in capacity. Emirates flight EK366 will depart Dubai at 04:35 and arrive in Taipei at 16:50 the same day. The return flight EK367 will leave Taipei at 23:30, arriving in Dubai at 05:05 the next day. Taipei Taoyuan International Airport recently completed enhancements making it compatible with the double-decker aircraft.

On a three-class configured Emirates A380, there are up to 429 seats in Economy Class, 76 lie-flat seats in Business Class and 14 Private Suites in First Class where passengers also have access to the world’s only onboard Shower Spas. First Class and Business Class passengers can also socialise at 40,000 feet at the Onboard Lounge. Emirates’ two-class configured A380 features 58 flat-bed seats and the Onboard Lounge in Business Class, and 557 spacious seats in Economy Class.

There are currently 36 A380 destinations on the Emirates network, setting the industry benchmark for both A380 connectivity and customer experience.

Copyright Photo: Antony J. Best/AirlinersGallery.com. Airbus A380-861 A6-EDA (msn 011) larger than life images of the Real Madrid star players on the rear fuselage with the team logo by the nose. A6-EDA arrives at London (Gatwick).