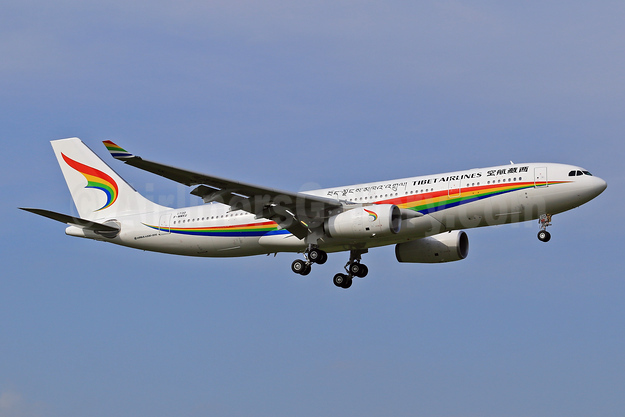 Yeti Air International (Kathamandu), a subsidiary of the Yeti Airlines Group, has been reformed as a new joint venture between Tibet Airlines (Lhasa, Tibet) (49 percent) and Yeti World Investment and HIF Aviation Investment according to The Economic Times. This time the airline will operate as Himalaya Airlines.

Himalaya Airlines will launch operations on October 28 on the Kathamndu-Lhasa route with leased Airbus A320 Family aircraft.

The airline will literally fly “on top of the world”.

Tibet Airlines started operations on July 26, 2011 and is 31 percent owned by Air China.

Copyright Photo: Gerd Beilfuss/AirlinersGallery.com. Tibet Airlines will likely be the operator of the aircraft for the new joint venture. Airbus A319-115 D-AVYH (man 4766) became B-6436 on delivery.

Tibet Airlines (Lhasa) from the Tibetan Autonomous Region of China has taken delivery of its first A319 with Sharklets. The pictured Airbus A319-115 B-6451 (msn 5855) was handed over at the Airbus Tianjin Delivery Centre (ATDC) on April 12 and joins Tibet Airlines’ existing fleet of eight existing A319s. The aircraft is the 165th assembled at Airbus’Tianjin Final Assembly Line (FALC).

The aircraft is powered by CFM56-5B engines and features a comfortable two class cabin, seating 128 passengers with eight in business class and 120 in economy.

Tibet Airlines’ base is Gongga Airport, Lhasa, is one of the world’s highest airports at an altitude of 12,000 feet. The new A319 is certificated for high altitude airport operation and Required Navigation Performance – Authorisation Required (RNP-AR) and Satcom is installed.
RNP-AR procedures represent today the most modern navigation technique, allowing the aircraft to fly precisely along predefined routes using on-board navigation systems and the GPS-based ‘Global Navigation Satellite System’ (GNSS). The high accuracy provided by RNP-AR is especially important for airlines operating in and out of airports in mountainous regions. Tibet Airlines has selected Airbus ProSky, an Airbus subsidiary, as its strategic partner for its RNP-AR operations.

Sharklets are made from light-weight composites and are 2.4 meters tall. They are an option on new-build A320 Family aircraft and standard on all members of the new A320neo family. They offer operators up to four per cent fuel burn reduction on longer range sectors and provide the flexibility of either adding an additional 100 nautical miles range or increased payload capability of up to 450 kilograms.
The FALC in Tianjin is based on the latest state-of-the-art Airbus single aisle final assembly line in Hamburg, Germany. The aircraft delivered in China are assembled to the same standards as those assembled and delivered in Europe. Airbus has delivered 165 Tianjin assembled A320 Family aircraft. The aircraft are in service with 13 Chinese and Asian airlines.

Tibet Airlines (Lhasa) formally launched operations on July 26, 2011 with the assistance of Air China (Beijing). Air China has acquired a 31% share in the new airline.

Copyright Photo: Gerd Beilfuss. Please click on the photo for the full story.

Tibet Airlines (Lhasa) will soon take delivery of its first Airbus A319. The new airline is planning to operate three A319s and is planning to launch scheduled operations next month.

Tibet Airlines (Lhasa) is a new airline that has ordered three Airbus A319s. The new carrier was approved by the Civil Aviation Administration of China (CAAC) in March 2010 and intends to start operations in 2011.