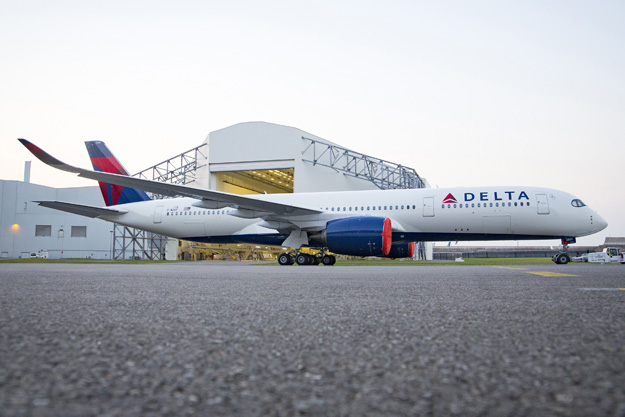 Delta Air Lines issued this statement and Airbus photo of the pictured A350-941 F-WZGP (msn 115) which will become N501DN on delivery:

Delta’s first Airbus A350, Ship 3501, left Airbus’ paint shop in Toulouse, France, on Tuesday June 13, 2017 coated in Delta’s signature livery as the aircraft prepares to be delivered in July.

The state-of-the-art widebody jet had its first test flight two weeks ago and will undergo additional flight testing in France before being handed over to Delta, Ship 3501 is expected to enter service this fall on trans-Pacific routes. Delta will be the first U.S. carrier to take delivery of the A350. 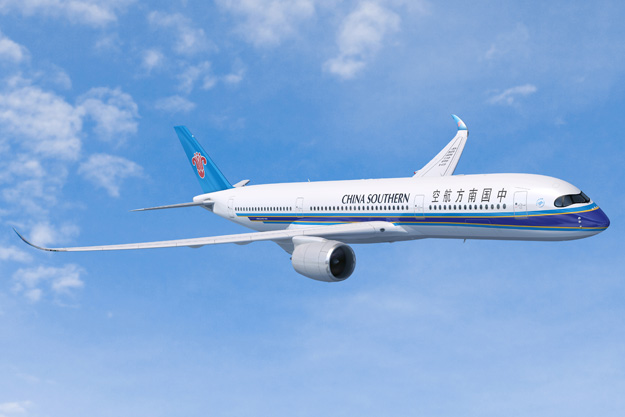 China Southern Airlines has signed a purchase agreement with Airbus for 20 A350-900s, becoming the latest customer for the aircraft.

China Southern Airlines now operates one of the largest Airbus fleet in the world with more than 300 Airbus aircraft in service, comprising the A320 Family, the A330 Family and five A380s.

With this latest order, Airbus has recorded a total of 841 firm orders for the A350 XWB from 45 customers worldwide, making it one of the most successful widebody aircraft ever. 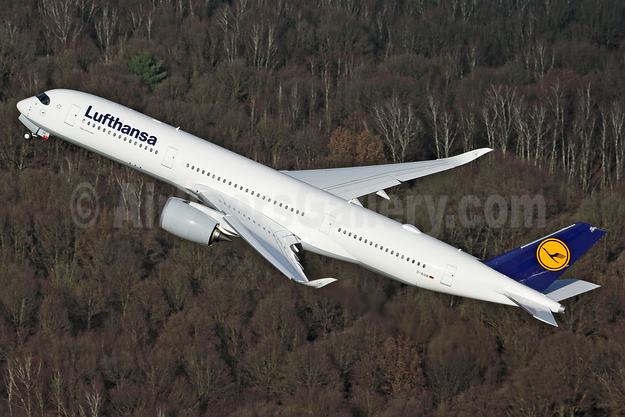 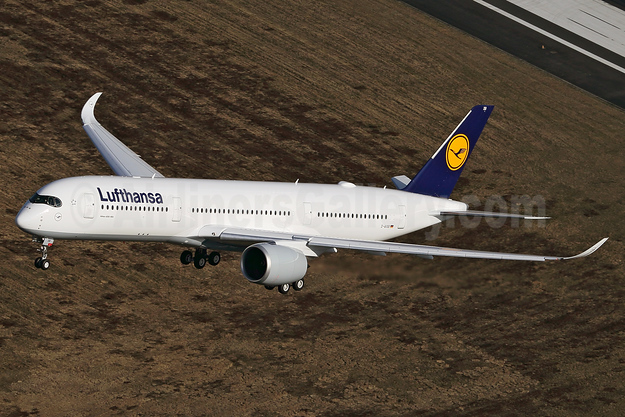 Air Lease Corporation (AL) has announced the placement of one Airbus A350-900 wide body jet on long term lease to Sichuan Airlines (Chengdu, China). The aircraft will be delivered in the first quarter of 2019 from ALC’s order book with Airbus. The A350-900 will be primarily operated across the Pacific, linking major cities in China with USA and Canada.

Sichuan will be leasing three Airbus A350-900s through AerCap and now one through ALC. 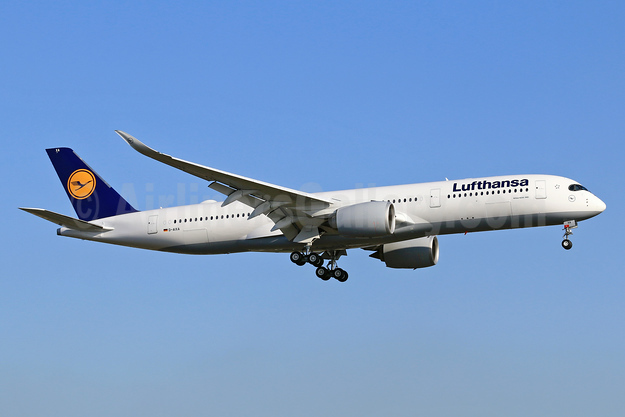 The aircraft is the first of 25 A350-900s that Lufthansa has on order. Lufthansa will deploy their first A350s on long-haul routes from Munich to Delhi and Munich to Boston.

Powered by Rolls-Royce engines, Lufthansa’s A350 XWB will feature a comfortable three-class cabin layout with 48 seats in Business, 21 seats in Premium Economy and 224 seats in Economy. The A350 XWB is equipped with Lufthansa’s latest cabin products including new seats, an all-new inflight entertainment experience and, for the first time, inflight connectivity, offering new levels of comfort and convenience to Lufthansa’s passengers in all classes.

Lufthansa made this announcement on December 21, 2016:

It is one of the most important events for the year for the Lufthansa Group: The first Lufthansa Airbus A350-900 landed at its home airport of Munich airport on December 21, 2016. With a total of ten aircraft, Lufthansa stations the world’s most modern long-haul fleet at the Munich hub.

Captain Martin Hoell flew the A350-900 “home”, and is thrilled: “The A350-900 is the most modern plane with the most up-to-date technical features a commercial pilot can fly.”

For the cabin crew who brought the A350-900 to Munich, the event is also “a milestone that makes us very proud”, says flight attendant Annika Wittmann.

Flight LH 9921 from Toulouse landed on the southern runway, and was greeted by the fire brigade spraying arches of water as a welcome. There was a Lufthansa Christmas angel on board, Lufthansa employee Anja Oskoui, who had a special something in her suitcase: She gave a 10,000 euro cheque to a Munich orphanage from help alliance, Lufthansa’s non-profit employee organization.

The help alliance organization has been around for more than 17 years. It is committed to ensuring that more people on our planet can decide for themselves how to live their lives. The result of the 13 Lufthansa-founded associations: More than 140 successfully supported aid projects, more than ten million euros in donations – in addition to emergency aid provided in the event of various natural disasters. 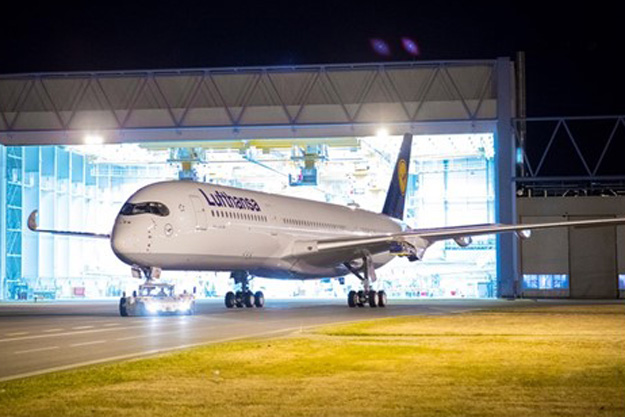 Lufthansa issued this statement and this Airbus photo about its first Airbus A350, namely the pictured A350-941 D-AIXA (msn 074):

The Lufthansa Airbus was in the so-called “paint shop” in the Airbus plant in Toulouse for eleven days, and then the moment arrived – the first A350-900 with white Lufthansa paint and blue lettering was ready to go. 30 people worked on the task, painting a total surface area of around 2,100 square meters.

This is the first time that the official identification code of D-AIXA has been seen. The use of an “X” follows in the style of the Airbus designation “A350 XWB” (extra wide body) – the cabin width of the A350-900 measures a generous 5.6 meters and gives passengers a great feeling of space.

The first ten Lufthansa Airbus A350-900 aircraft will be stationed in Munich for the coming winter. Delhi and Boston will be the first destinations to be served. The plane has space for 293 passengers – 48 in Business Class, 21 in Premium Economy and 224 in Economy Class. The A350-900 is the most modern and the most environmentally friendly long-haul aircraft in service world-wide. In comparison with similar types of aircraft, it uses 25 percent less kerosene and produces 25 percent fewer emissions, and the noise “footprint” produced by the A350-900 is up to 50 percent smaller. 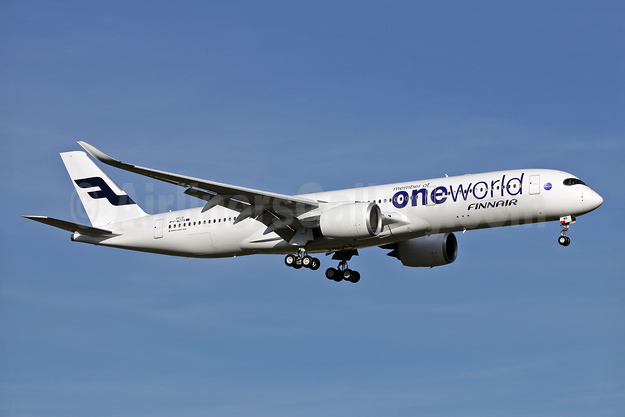 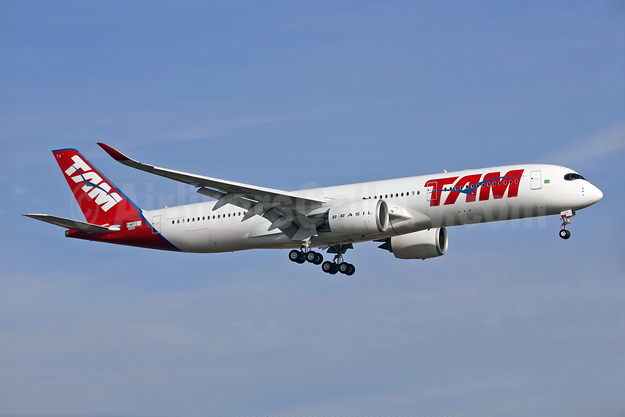 Qatar Airways successfully launched its new global brand campaign and tagline – Going Places Together – at a press conference in New York on December 9. The unveiling of the new campaign was well received by the international media and VIP guests who attended.
The press conference was hosted by Qatar Airways Group Chief Executive, His Excellency Mr. Akbar Al Baker, who said, “This campaign is all about the coming of age for this airline – taking a life of its own with a future that blossoms into a treasure each and every day. It’s about going places – literally and figuratively. We value each journey we take with our guests on board, and the overall experience of going places together.” 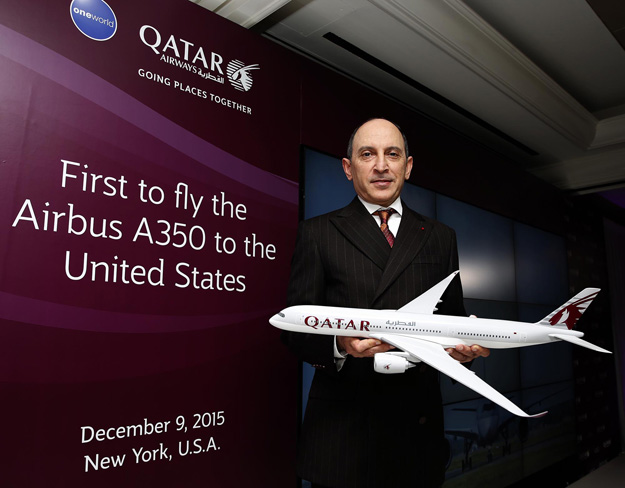 Photo Above: Qatar Airways. Qatar Airways Group Chief Executive, His Excellency Mr. Akbar Al Baker celebrates landing of the first Airbus A350 in the US.

Drawing together a series of interconnected themes, the re-brand is a fresh and even more emotionally engaging direction for the airline, which has developed its messaging strategy to reflect its evolution as a brand and its global role as a leader in the airline industry.

One of the fastest growing airlines operating one of the youngest fleets in the world, Qatar Airways has adopted the emotive and modern brand campaign to reflect its core values as a contemporary and innovative company that is really going places and wants nothing more than to inspire its passengers to do the same.

At the heart of the campaign is the concept of the airline connecting people both physically and emotionally with any of the 153 places on its global network on board one of its 173 state-of-the-art aircraft. The theme of connectivity extends to the warm welcome every passenger receives when they board a Qatar Airways flight from the friendly and helpful cabin crew who are hand-picked for their natural ability to make personal connections with every passenger they meet.

The new campaign, which debuted in Qatar’s newspapers, television and out-of-home on Tuesday, will now roll out across global media channels including platforms such as the New York Times, CNN, Financial Times and Times Square billboards.The campaign celebrations began in New York on Tuesday when Qatar Airways became the first commercial airline to land an Airbus A350 in the United States. Qatar Airways was the global launch carrier of the A350 and is the first to fly the aircraft to three continents; the airline’s fleet of seven A350s currently flies twice a day to Frankfurt, double daily to Munich and three times a day to Singapore from Doha.

An eighth A350 will join the fleet before the end of the year and is scheduled to fly daily to Philadelphia from January 1, 2016. As further A350s join the fleet throughout 2016 passengers will have the opportunity to experience this new-generation aircraft on flights to Boston launching on March 16, and the new second daily flight to New York from April 1 and Adelaide, Australia from May 2.

Editorial Note: As previously reported on our World Airline News Facebook page, the first Airbus A350 departure from New York (JFK) was marred by an aborted takeoff (see video below):