ExpressJet Airlines has announced its reboot with the launch of aha!, its “air-hotel-adventure” leisure brand.

Combining value-priced fares and nonstop flights, aha! will begin flying from its home base at Reno-Tahoe International Airport on October 24, 2021 to eight cities across the western United States.

aha! will serve each community three times a week with 50-seat Embraer ERJ145 regional jets. In the coming months, aha! plans to reach more than 20 destinations, from Reno-Tahoe, in the western United States.

aha! is powered by ExpressJet Airlines, which has operated reliable air services to hundreds of smaller cities in the United States for 35 years.

ExpressJet Airlines made this announcement:

On August 24th, ExpressJet reached a major milestone by successfully demonstrating a flight under Part 121 for the FAA. After a few administrative items are completed, ExpressJet will receive full FAA approval to conduct revenue operations under its 121 certificate.

ExpressJet Airlines (Atlanta) made this announcement on social media about restarting operations:

The airline is planning to restart operations in late September.

ExpressJet Airlines has a 35-year history of superior service and performance and is the amalgamation of Atlantic Southeast Airlines (ASA) and Continental Express, former subsidiaries of Delta Air Lines and Continental Airlines respectively.

On July 30, 2021, The Department of Transportation (DOT)  issued its final fitness order allowing ExpressJet Airlines to restart commercial operations. ExpressJet stopped flying last year after the termination of its United Express operations. The passage of time required the company to seek DOT fitness recertification in order to “reboot.”  Note that ExpressJet has maintained its FAA flying authority as a Part 121 carrier.

ExpressJet expects to resume service within the quarter with a focus on cities, markets, and customers that have seen diminished air service as a result of airline consolidation and an industry trend towards larger aircraft. ExpressJet will leverage its 35-year history of having flown several hundred aircraft to most of America’s smaller airports and intends to provide high-quality, reliable, efficient point-to-point flying service in small and abandoned markets with unmet customer needs – avoiding needless overlap with the major airlines and “ultra-low-cost carriers.”

ExpressJet is excited about the opportunity before it, and we will announce more detailed flying plans in the coming weeks.

The carrier was forced to halt operations on September 30, 2020 after United Airlines decided to consolidate its United Express Embraer ERJ 145 regional operations under CommutAir.

ExpressJet Airlines has filed with the Department of Transportation (DOT) to resume airline passenger operations under its own brand once again.

The airline, which was dropped by United Airlines as a United Express carrier on September 30, 2020, is  planning to resume service to small and medium-size destinations in the United States.

Operations would commence initially in May with two Embraer ERJ 145s as the fleet would grow to 12 aircraft by the same time next year. 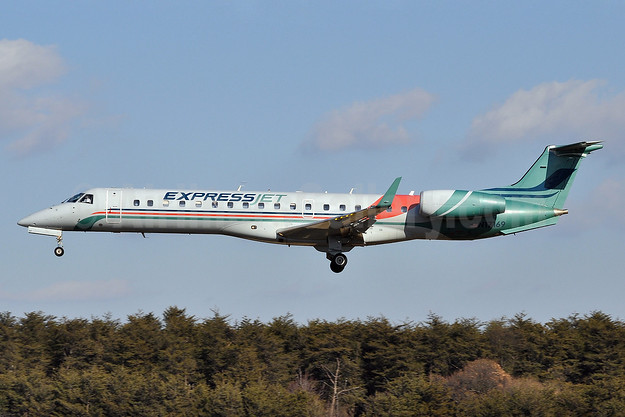 The company expressed its vision of the future:

ExpressJet Airlines has a 33-year history of superior service and performance and is the amalgamation of Atlantic Southeast Airlines (ASA) and Continental Express, former subsidiaries of Delta Air Lines and Continental Airlines. Our company is positioned to provide Scheduled Service or Charter flights to much of the United States, Canada and Mexico.

ExpressJet’s plans for 2021 and beyond are to provide high-quality, reliable, efficient point-to-point flying to small and medium sized cities that have lost service in recent years as a result of U.S. airline industry consolidation and COVID-19 driven route reductions.

On July 30, 2020, United Airlines (UA) selected CommutAir as its sole ERJ145 operator, and asked ExpressJet Airlines to wind-down flying for UA by year end. After spending considerable time planning this wind-down, ExpressJet and United’s management teams decided that due to uncertain schedules from October to December, it would be best to accelerate the termination of all ExpressJet scheduled service flying, on behalf of United Express, on September 30, 2020.

Mechanics at ExpressJet, a regional carrier for United Airlines, begin informational picketing at the company’s locations throughout the country on Tuesday, November 26. They want the public to know that after ten years of concessions they are no longer waiting for the airline to do the right thing, and it could cause the company’s service to suffer because more and more of them are quitting every day.

There is a known shortage of aviation mechanics. These dedicated professionals have stayed loyal to ExpressJet through thick and thin, but no more. The company is trying to take their retirement and use that to fund a paltry wage increase that leaves them thousands of dollars behind their peers in the regional industry. With no future talks scheduled many given up and are moving on. ExpressJet customers deserve to know the truth.