Gulf Air, the national carrier of the Kingdom of Bahrain, has announced that it will resume its direct flights to and from the Republic of India staring with Thiruvananthapuram (Trivandrum) on September 14, 2020 along with Cochin and Calicut this week with plans to announce a further expansion into more destination within India soon. The flights are operating based on a special agreement between the governments of the Kingdom of Bahrain and the Republic of India.

Gulf Air has been operating direct flights between the Kingdom of Bahrain and the Republic of India since 1960 and its network of Indian cities has always been key within the Gulf Air’s global network. The airline currently flies to and from London, Paris, Frankfurt, Manila, Athens, Cairo, Abu Dhabi, Dubai, Kuwait, Peshawar, Islamabad, Lahore and Karachi.

Gulf Air, the national carrier of the Kingdom of Bahrain, and SpiceJet, India’s favorite carrier, signed a Memorandum of Understanding (MoU) to explore greater cooperation between the two airlines including an interline and codeshare agreement, coordinated cargo services, engineering services and pilot training. The MoU was signed by Mr. Krešimir Kučko, Gulf Air’s Chief Executive Officer and Mr. Ajay Singh, Chairman and Managing Director at SpiceJet.

Besides looking at a codeshare and interline agreement, the scope of the MoU includes the two airlines exploring growth opportunities beyond network expansion by leveraging each other’s strengths. Gulf Air and SpiceJet will look at collaborating in the field of pilot training to nurture talent in order to deliver the finest resources for both the airlines. The airlines will also engage and collaborate to enhance their respective cargo and engineering services. The signing of this MOU between the two carriers aims at initiation of collaboration between the two carriers, and further strengthening the strong ties between India and the Kingdom of Bahrain.

Gulf Air, the national carrier of the Kingdom of Bahrain, has announced the resumption of its direct services between Bahrain and Erbil in Iraq; further strengthening the airline’s existing Iraqi routes of Baghdad and Najaf. 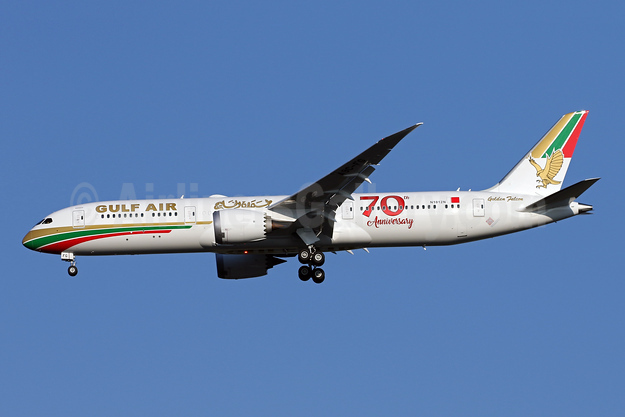 Gulf Air, the national carrier of the Kingdom of Bahrain, proudly received on October 22 its seventh Boeing 787-9 Dreamliner at Bahrain International Airport in its special 70th anniversary livery which showcases the airline’s iconic vintage design from the last century with a revamped look. A number of VIP guests from the aviation industry and members of the media joined Gulf Air’s executive management at the welcoming event and viewed the new aircraft with its redesigned vintage version of the Golden Falcon Lockheed TriStar livery, representing Gulf Air’s iconic design from the 1970s. With the arrival of this special aircraft, Gulf Air has revealed its 70thanniversary logo which will be used in the airline’s marketing and promotional campaigns in 2020.

The new Dreamliner joined the Gulf Air fleet on its first commercial flight on October 23, 2019 from Bahrain International Airport to London Heathrow at 1015am local time. This will increase the total number of Dreamliners operated by the airline to seven aircraft which will be followed by the delivery of three more by end of 2020.

In 2018, Gulf Air launched its new brand identity at the Formula 1 Gulf Air Bahrain Grand Prix and introduced its first Boeing 787-9 Dreamliner along with a series of new destinations. The airline also launched a new boutique strategy in early 2019. As Gulf Air moves forward with its strategy, the airline pays tribute to the past with a revamped livery signalling a new era.

The announcement follows the signing of a Memorandum of Understanding (MOU) between the two carriers at the Bahrain International Airshow in November last year and will further strengthen the strong ties between the two countries and carriers.

Guests who are travelling to the USA with Etihad will be able to enjoy the preclearance facility offered at Abu Dhabi International Airport. The United States Customs and Border Protection (CBP) facility at Terminal 3 in Abu Dhabi Airport is a purpose-built facility that allows US bound passengers to process all immigration, customs and agriculture inspections in Abu Dhabi before they depart. On arrival in the US, guests arrive as domestic passengers, speeding up the arrival process and making onward connections more seamless.

In addition to the codeshare signing, both Etihad Guest and Gulf Air Falconflyer loyalty programs are exploring ways to offer earn and burn opportunities. 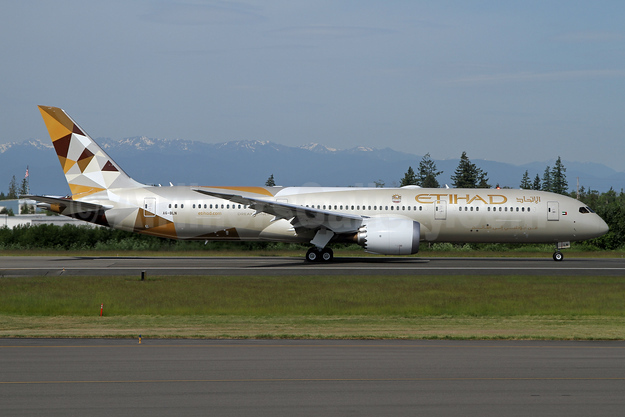 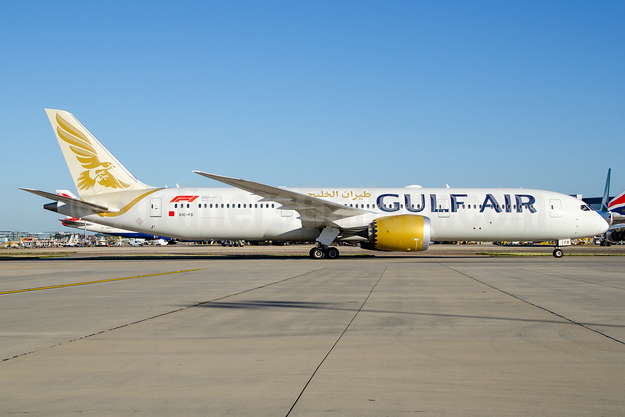 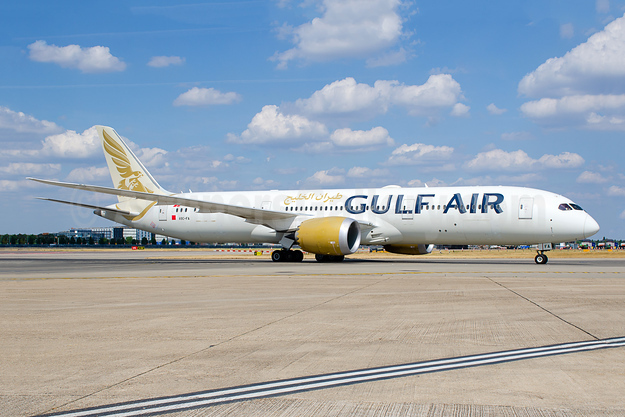 Gulf Air, the national carrier of the Kingdom of Bahrain, and Etihad Airways, the national airline of the United Arab Emirates, are set to explore deeper cooperation following the signing of a Memorandum of Understanding (MOU) at the Bahrain International Airshow.

The wide-ranging MOU covers scope to introduce joint codeshare operations between Abu Dhabi and Manama, as well as on the global flight networks beyond the two carriers’ GCC hubs.

The MOU also contains plans for greater commercial cooperation in the fields of cargo, engineering, guest experience and the optimisation of pilot training facilities.

In addition to exploring codeshare operations, the teams at Etihad Guest and Gulf Air Falconflyer loyalty programs will shortly begin discussions which would see members of each programme being offered reciprocal earn and burn opportunities.

The teams in both carriers’ engineering and cargo divisions are also set to begin talks about greater cooperation. These discussions would look at optimising MRO (maintenance repair operations) opportunities, as well as ways to increase volumes of freighter traffic flowing into and out of Abu Dhabi and Bahrain. The airline released photos of its new updated cabin for the new engine option.

Gulf Air, the flag carrier of the Kingdom of Bahrain, took delivery of its first A320neo. The aircraft, powered by CFM LEAP-1A engines, made its maiden journey from Toulouse to Bahrain, landing at the Bahrain International Airport at 16:00 local time.

The aircraft is the first of the 29 A320neo Family aircraft ordered during the 2016 Bahrain International Airshow. This delivery also makes Gulf Air the first Middle Eastern national carrier to fly the A320neo.

Gulf Air’s Boeing 787-9 Dreamliner passengers will experience many improvements with the 787 family. Onboard, you can enjoy the largest windows of any jet, air that is cleaner, more humid and at a higher pressure for greater comfort, large overhead bins with room for everyone’s bag, soothing LED lighting and technology that senses and counters turbulence for a smoother ride. Gulf Air and Boeing today celebrated the delivery of the first 787 Dreamliner for the national carrier of the Kingdom of Bahrain. The airplane also debuts the carrier’s new livery.

Gulf Air is set to take delivery of four more Dreamliners this year. The airline plans to introduce the 787 on its twice-daily service between Bahrain and London Heathrow before deploying the long-range efficient jet on other routes.

Boeing has delivered more than 670 787s since deliveries began in 2011. The 787 fleet has flown more than 240 million passengers while saving over 23 billion pounds of fuel and enabling airlines to open more than 180 new nonstop routes around the world.

The first Gulf Air 787 – painted in the airline’s new livery – recently flew a special mission to the airline’s home base to perform a fly pass over the 2018 Bahrain Grand Prix. Formula 1 race fans were treated to a dramatic aerial display prior to the start of the championship race.

Gulf Air officially on April 5 unveiled its new livery, which will appear on the first Boeing 787-9 Dreamliner A9C-FA (msn 39996).