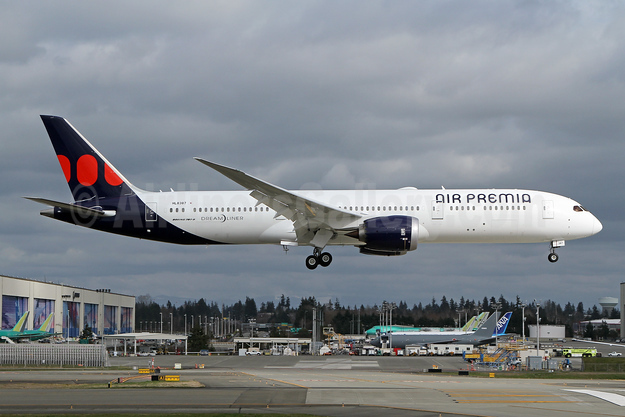 The commitment, valued at $1.4 billion at list prices, will be reflected on Boeing’s Orders & Deliveries website when it is finalized.

With its base at Seoul Incheon International Airport, Air Premia announced its plan to launch operations in September 2020. The carrier will initially operate regionally in Asia before expanding its network to Los Angeles and San Jose by 2021.

Air Premia is planning to use its new Boeing 787-9 Dreamliner on the Seoul (Narita) – Los Angeles route starting in 2021 according to Forbes. This will be the first long-haul route for the new carrier.

Air Premia will take delivery of its first Dreamliner next year.

Read the full story from Forbes.

Air Premia labels itself as a “hybrid service carrier”:

“A hybrid carrier that combines reasonable price and premium service”.

All images by the new airline.

The airline will use its 787-9 aircraft on routes of more than six hours to North America, Europe and Oceania. It plans to start services in 2020 with long-haul services from 2021.

The Trent 1000 has powered the first flight and entry into service of every version of the Dreamliner – the 787-8, 787-9 and 787-10 and incorporates technology that contributes to the Dreamliner achieving 20 per cent greater efficiency than the aircraft it replaces, as well as having half the noise footprint of previous-generation aircraft.