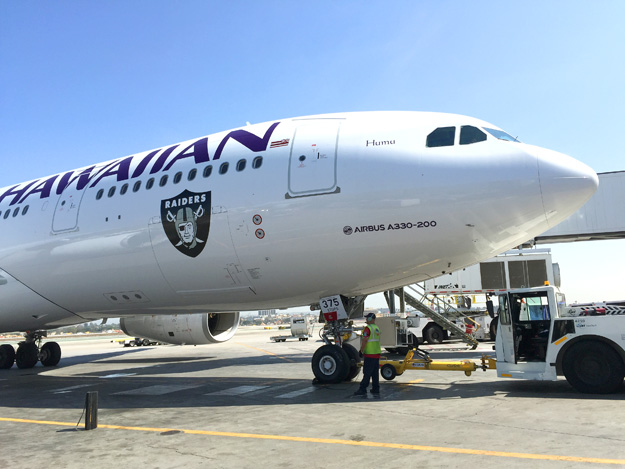 Hawaiian Airlines (Honolulu) has announced the renewed partnership with the NFL Oakland Raiders. The airline has added the Raiders shield logo to an Airbus A330-200. The airline issued this statement:

Hawaiian Airlines is proud to announce it will serve as the Official Airline of The Oakland Raiders for the 2015 National Football League (NFL) season. Hawai‘i’s largest and longest serving carrier has provided its signature ‘Mea Ho‘okipa’ (translation: I am host) in-flight hospitality and charter service for the team’s away games since 2000.

Hawaiian provides a dedicated catering coordinator to meet the team’s expectations and to handle special requests. Hearty, nutritious meals are provided along with sandwiches and an assortment of healthy snacks that include fresh fruit, protein bars and, at the Raiders’ request, products from Hawai‘i, such as Passion Orange Guava Juice and Hawaiian Iced Tea. For entertainment, Hawaiian offers a wide selection of movies, TV shows and music.

Hawaiian Airlines has served the Oakland market since 2008, and provides daily nonstop flights to both Honolulu and Kahului, Maui. During the peak summer months, travelers can fly nonstop to all four major Hawaiian islands, when the airline adds seasonal service from Oakland to Līhu’e, Kaua’i and Kona, Hawai’i Island, between May and September. Hawaiian also serves the Bay Area with nonstop flights between San Francisco and San Jose to Honolulu.

Boeing (Chicago, Seattle and Charleston) is getting ready for the upcoming 2015-2016 National Football League (NFL) season and in particular the hometown Seattle Seahawks team. The company has painted a different 747 in the “12th Fan” livery with “In it to win it!” titles.

The 747 will perform at the annual Boeing Seafair Air Show at Lake Washington in Seattle on August 2.