Iran Air flight 215 from Qeshm to Tehran on March 19 with Fokker F.28 Mk. 0100 (Fokker 100) EP-IDG (msn 11302) crash landed at Tehran after the main gear could not be lowered. All passengers and crew members were able to safely evacuate the aircraft.

Reuters is reporting a fire broke out but was contained.

Here is the report by Reuters:

An airliner caught fire on landing at Tehran’s Mehrabad airport on Tuesday but all 100 passengers were evacuated without injury, the head of Iran’s emergency department said on state television.

A video posted by the Islamic Republic News Agency showed flames and sparks shooting out from the back of the plane at the moment of landing.

The fire broke out after the aircraft’s landing gear did not open properly, and was later brought under control, emergency department head Pir-Hossein Kolivand said.

The pilot was unable to open the back wheels of the plane and circled the airport attempting to open all the wheels before landing the plane on its body, according to Fars news agency.

The plane was a Fokker 100 belonging to Iran Air, Fars reported. Other agency reports said it was flying from an Iranian island in the Gulf to the capital.

IRIB news agency quoted Reza Jafarzadeh, the head of public relations at Iran’s Civil Aviation Organisation as saying the plane had 24 passengers and nine crew. It did not give any explanation for the discrepancy in the figures.

Iran has suffered a string of plane and helicopter crashes over the past few decades. Tehran says U.S. sanctions have long prevented it from buying new aircraft or spare parts from the West to modernize its fleet.

Video of the crash landing: 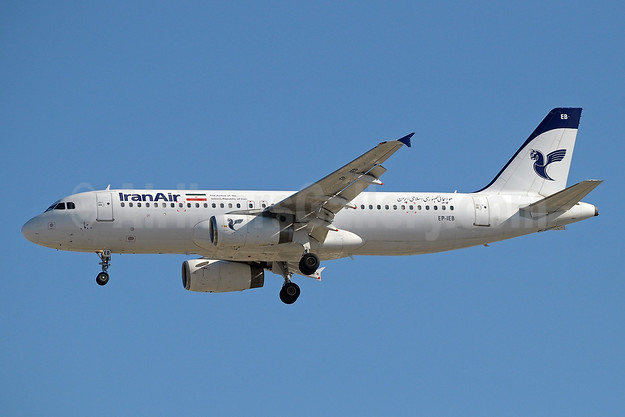 IranAir (Tehran) will now start the Tehran – Belgrade route on March 3. The new twice-weekly route will be operated with Airbus A320s.

The delivery is the first from a firm order placed by Iran Air in December 2016 for 100 Airbus aircraft (46 single aisle and 54 wide-body jets) to renew and expand its fleet.

Fabrice Bregier, President, Airbus Commercial Aircraft and Chief Operating Officer Airbus. stated “Clearly in a country of 80 million people, there is a need for the latest passenger aircraft to meet domestic as well as international demand.

Iran is forecast to require some 400 to 500 new aircraft to modernise as well as to grow its existing passenger fleet to catch up with years of pent up demand on domestic as well as international routes. The latest generation of fuel efficient aircraft will also allow new routes and markets to be exploited.

The delivery complies with all relevant international laws. Airbus coordinated closely with regulators in the EU, US and elsewhere to ensure understanding and full compliance with the Joint Comprehensive Plan Of Action (JCPA). Airbus will continue to act in full compliance with the conditions of the US government Office of Foreign Assets Control (OFAC) licences.

Iran Air and Airbus have signed a firm contract for 100 aircraft, building on an initial commitment signed in January 2016 in Paris. The agreement signed by Farhad Parvaresh, Iran Air Chairman and CEO and Fabrice Bregier, Airbus President and CEO, covers 46 A320 Family, 38 A330 Family and 16 A350 XWB aircraft. Deliveries will begin in early 2017.

The agreement is subject to US government Office of Foreign Assets Control (OFAC) export licences which were granted in September and November 2016. These licenses are required for products containing 10 per cent or more US technology content. Airbus coordinated closely with regulators in the EU, US and elsewhere to ensure understanding and full compliance with the JCPOA. Airbus will continue to act in full compliance with the conditions of the OFAC licences.

Based on its Memorandum of Agreement (MOA) with Iran Air announced in June 2016, the contract was reached within the terms of the U.S. Government license issued to Boeing in September.

IranAir (Tehran) is the last passenger airline operator of the Boeing 747SP in the world. The flag carrier will offer a final farewell flight over Tehran on November 23. The Jumbo is currently operating between Tehran (Imam Khomeini International Airport) and Kuala Lumpur.

45 Boeing 747SPs (Special Performance) were built between 1974 and 1989 by Boeing. The “Stubby Jumbo” specialized in long, usually thin, routes in the early years.

In other news, IranAir will resume weekly Tehran-Moscow (Sheremetyevo) service on September 23 with Airbus A320s per Airline Route.

Copyright Photo: Christian Volpati/AirlinersGallery.com. Boeing 747SP-86 EP-IAC (msn 21093) will operate the last flight. EP-IAC is pictured in the original 1962 markings arriving at Paris (Orly). EP-IAC was delivered new to IranAir on May 27, 1977.

IranAir (Tehran) has retired the last operating passenger Boeing 747-100 in the world. Boeing 747-186B EP-IAM (msn 21759) was ferried yesterday (January 8) from Mehrabad Airport (THR) in downtown Tehran (used for domestic flights) to nearby Imam Khomeini International Airport (IKA) southwest of Tehran (used for international flights) for storage in the cargo area. The flight lasted only 10 minutes on three operating engines and was flown by Captain Moghadam. EP-IAM is now grounded forever at IKA after almost 35 years of service

EP-IAM was delivered new from Boeing on August 2, 1979 and was flown its entire service life with the flag carrier of Iran. This is a testimony to Boeing for the durability of the airframe.

Thanks to Shahram (Shary) Sharifi for his eyewitness report from Iran.

In other news, IranAir restarted twice-weekly service from Mashbad to Bahrain on December 21, 2013.

IranAir (Tehran) is one of the last operators of the passenger Boeing 727-200 in scheduled service. Boeing 727-286 EP-IRP (msn 20945) operating flight IR 277 from Tehran to Urmia with 93 passengers and 12 crew members crashed about five miles from Urmia yesterday (January 9). At least 77 people have been killed and 26 injured. The airliner is destroyed.

Read the full report from the BBC:

Copyright Photo: Shahram (Shary) Sharifi. EP-IRP is pictured arriving at Tehran prior to the tragic crash.

IranAir’s (Tehran) Airbus A300B4-605R EP-IBB (msn 727) ran off runway 19R at Stockholm (Arlanda) yesterday (January 16) at low speed on its takeoff roll. The airliner was operating flight IR 762 to Tehran. A private video showed an engine surge causing the aircraft to veer left, exiting into the snow and grass. There were no injuries or damage.