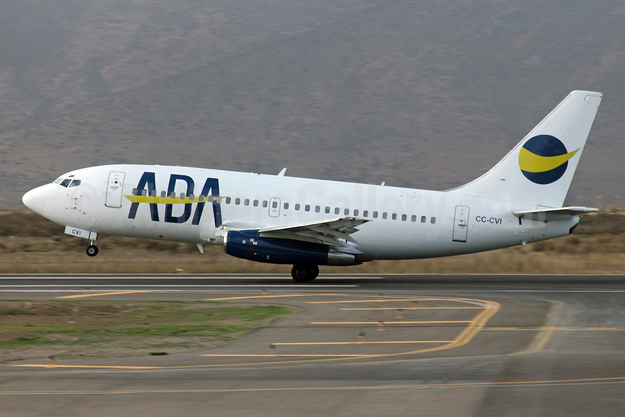 The Boeing 737-2Q3 was previously operated in Chile by ADA-Aerodesierto Airlines (CC-CVI, msn 22367).

The registration has been cancelled and now is registered as YV3527 and will be operated by Estelar. 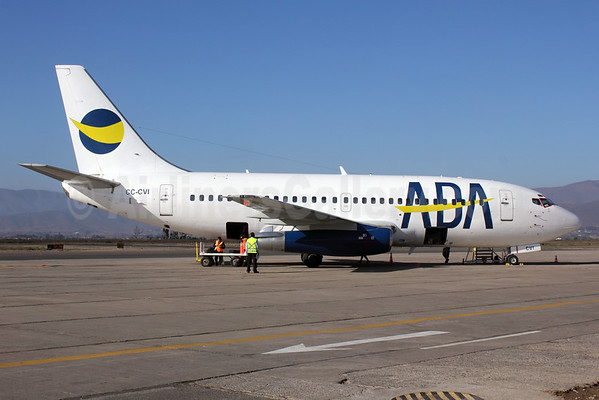 ADA – Aerodesierto Airlines (Calama, Antofagasta) has suspended operations. The short-lived airline halted operations on July 15 per Alvaro Romero of ModoCharlie reporting from Chile. The last flight was flown by ONE Airlines Boeing 737-36N CC-AIT for the airline on July 19.

The new airline launched operations on April 27, 2015 as previously reported.

ADA – Aerodesierto Airlines (Aerodesierto S.A.) (Calama, Antofagasta) on April 27 began operations from its home base in Calama, an important mining city of northern Chile. The new airline began linking the cities of La Serena and Santiago de Chile (SCL). The company currently operates with just one Boeing 737-200 (the pictured Boeing 737-2Q3 CC-CVI, msn 22367) which is wholly owned by the company.

The company is also considering linking Jujuy and Salta in Argentina with the Chilean northern cities.

Currently, the pictured CC-CVI performs flight DTO 702 from SCL to SCSE and El Loa, Calama (SCCF). The return flight to Santiago is flight DTO 703 which is operated six times per week.

Report and photos by Assistant Editor Alvaro Romero from Santiago.

Copyright Photos: Alvaro Romero/AirlinersGallery.com. Ex-LAN Airlines Boeing 737-2Q3 CC-CVI is pictured preparing for departure at the La Florida Airfield in La Serena City (LSC/SCSE), both on the ramp (above) and departing runway 30 (below) headed towards Calama.