Sunwing Airlines has made this announcement:

Canadians looking for a tropical escape that’s easily accessible from their local airport have even more options to choose from this coming winter thanks to a new agreement between leading tour operator, Sunwing, and ultra-low-cost airline, Swoop.

Sunseekers departing from Hamilton, London, Abbotsford, Edmonton and Winnipeg can now book vacation packages with the tour operator that include a Swoop flight.

All Sunwing vacation packages with Swoop flights include one complimentary item of checked luggage, round-trip airport to hotel transfers, assistance from Sunwing Experiences representatives throughout, the option to benefit from savings by pre-purchasing Sunwing Experiences excursions at the time of booking and more.

Vacationers departing from Hamilton can now select from both Sunwing’s and Swoop’s regular flight services to Cancun – giving them the choice of four different departure days each week (including both Saturday and Sunday). Vacationers from Edmonton will enjoy additional weekend departure options to reach Mazatlán and Puerto Vallarta. Finally, the addition of Swoop flight services from Winnipeg to Los Cabos has tripled the choice of departure days for customers travelling from the region, with new flights options departing Sundays and Wednesdays.

Sunwing has announced it is offering a direct flight service twice a week on Mondays and Fridays from Montreal to Havana, from December 13, 2019 until March 13, 2020.

Celebrating its 500th anniversary this year, the capital city of Cuba, Havana has a rich history and fascinating heritage to uncover. Visitors will feel like they’ve travelled back in time as they stroll along the cobblestone streets of Old Havana, lined with picturesque Baroque architecture and classic American cars. Travellers can even follow in the footsteps of famous author Ernest Hemingway, who called the city home for over 20 years, by discovering some of his favourite old haunts on a Sunwing Experiences excursion.

In other news, the company has also announced it plans to fly direct to Miami from Moncton this winter. A new destination added by Sunwing for this coming season, travellers can experience all that this premier beach and nightlife destination has to offer with convenient weekly Saturday departures from February 8, 2020 until May 2, 2020 inclusive.

The first carrier to offer a direct flight service to Miami from Greater Moncton, Sunwing is expected to be the only airline offering this route for the coming season. With the addition of Miami, sunseekers departing from Greater Moncton now have six of the tour operator’s most popular southern destinations available on their doorstep including Puerto Plata and Punta Cana in the Dominican Republic, Montego Bay in Jamaica, Cancun, Mexico and Varadero, Cuba. 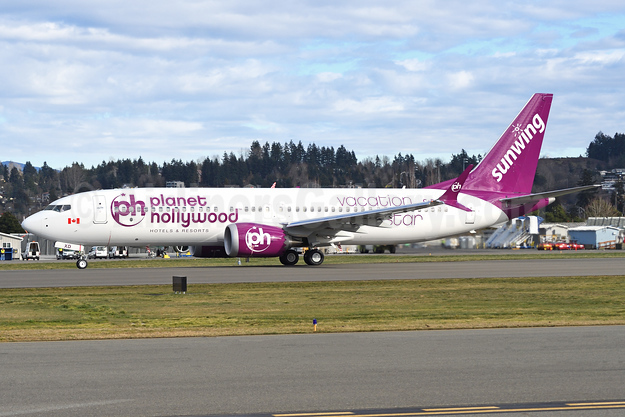 Sunwing Airlines has become the first Canadian airline to voluntarily ground its four Boeing 737-8 MAX 8, including one which was just delivered.

The pictured C-FAXD in the special Planet Hollywood scheme was handed over to the carrier on March 11, 2019 and put into storage. 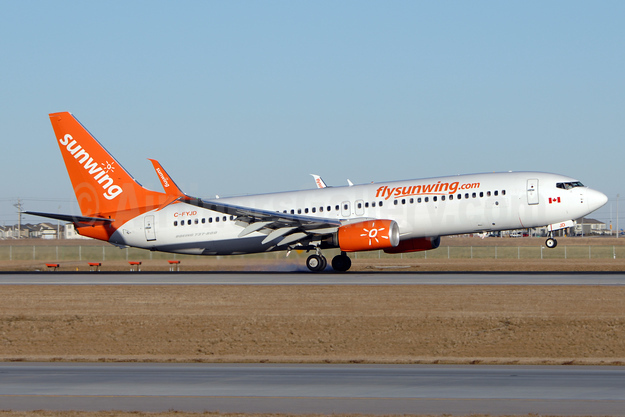 The carrier will also operate weekly flights to MIA also from Ottawa, Quebec City and Toronto (Pearson) starting later this month during the winter/spring season according to Airline Route. 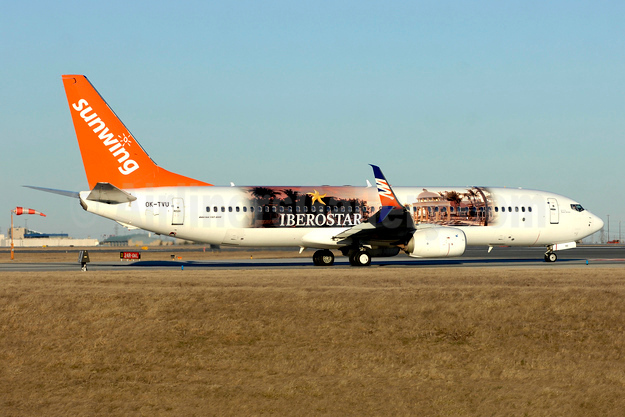 Sunwing Airlines is expanding its services to Florida to offer flights to Daytona Beach from Toronto (Pearson) for the first time.

Sunwing will be the only Canadian carrier to offer nonstop international flights to this exciting destination.

The twice-weekly seasonal flight service will operate on Mondays and Thursdays beginning on January 28, 2019. 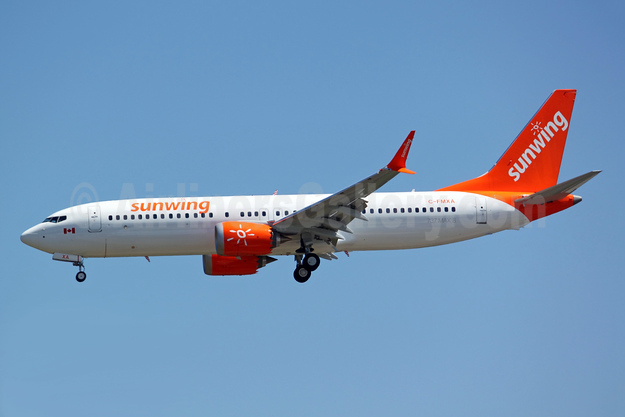 “The 737 MAX 8 aircraft is an integral part of Sunwing’s overall expansion plans across an increasing number of both Canadian and U.S. gateways and illustrates the evolution of the company,” said Mark Williams, President of Sunwing Airlines. “Sunwing may have increased in scale, however, what drove the company in the early 2000s is still central to our business today – in particular, the airline’s commitment to its passengers that when they travel with Sunwing, they travel with an award-winning airline and one of Canada’s most modern fleets.”

“Sunwing already flies one of the youngest and most fuel-efficient airplane fleets in Canada and now they take another leap forward with the Boeing 737 MAX, a new jet that can fly farther, use less fuel and provide greater passenger comfort,” said Brad McMullen, Boeing Senior Vice President of Sales for The Americas. “Congratulations to the Sunwing team. We are confident their new MAX airplanes will bring more Canadians to and from exceptional vacations in the sun.”

John L. Plueger, Chief Executive Officer and President of Air Lease Corporation also welcomed the news adding, “ALC is delighted to be delivering the very first MAX 8 into Sunwing’s fleet.  This state of the art new aircraft will bring significantly expanded capability, efficiency, and environmental friendliness to Sunwing’s growing network as well as usher in a new level of customer service and experience.”

This newest 737 arrival brings the latest technology to the most popular jet aircraft of all time and will enable Sunwing to offer reliable, cost-effective and environmentally-conscious service – something that is paramount for the brand. A next-generation aircraft, the 737 MAX 8 is expected to reduce Sunwing’s carbon footprint even further. The MAX uses less fuel and reduces CO2 emissions by 20% compared to the older aircraft that it replaces.

Flying from the Boeing head office in Seattle, Washington, the delivery flight was piloted by Ron Henry, one of Sunwing’s first pilots, flying Canadians to and from their holidays since the company’s inception, and First Officer, Jessalyn Teed, a recent graduate hired through Sunwing’s cadet program in partnership with the University of Waterloo.  The flight carried executives from Sunwing and select media guests who were invited to experience the new aircraft’s aerodynamic design, elevated passenger comfort, mood lighting and sleek technology.

Sunwing has more flights to the south than any other leisure carrier with convenient direct service from 33 gateways across Canada to over 45 popular sun destinations.  All Sunwing packages include return flights on Sunwing Airlines where passengers can sit back and relax on board with award-winning inflight service that includes a sparkling wine toast, complimentary non-alcoholic beverage service and buy on board selection of light meals and snacks with choices inspired by Food Network Canada Celebrity Chef, Lynn Crawford. Passengers also benefit from a generous complimentary 23kg checked luggage allowance.

While being pushed back, the APU of C-FPRP struck the wing tip of C-FDMB. A fire broke out in the APU and the wingtip of C-GKWJ. The crew of the WestJet 737 decided to evacuate the aircraft on the taxiway. The fire was quickly extinquished. There was one reported injury.

WestJet has confirmed that WS 2425, a Boeing 737-800 with 168 guests and six crew onboard, inbound from Cancun to Toronto Pearson, while waiting to proceed to the gate and stationary, was struck by a Sunwing aircraft pushing back from the gate.

Sunwing made this announcement:

There were no Sunwing crew or passengers onboard at the time of the incident. We are awaiting further information from Swissport and will provide more details as they become available.