Sterling Airways (Jacksonville, FL), formerly Via Airlines, has made this announcement:

Sterling Airways, a Wexford Capital LP portfolio company, is pleased to announce that it has received its Part 121 certification from the Federal Aviation Administration (FAA), and authorization to resume scheduled passenger service from the Department of Transportation (DOT).

The new airline, currently based in Jacksonville, Florida, is led by Chief Executive Officer Wayne Heller, former Chief Operating Officer of Republic Airways, along with several former members of Heller’s management team that led Republic’s initial growth of 24 to 30 airplanes a year.

“While Sterling has been certified as an ERJ 145 operator, we’re very much a blank canvas that can move quickly to meet the needs of potential partners and markets crippled in the wake of COVID-19”, said Heller.

Sterling’s platform is designed to be the most flexible in the industry, allowing for additional aircraft types to be added to its certificate and operations that can be based anywhere in the U.S. For communities affected by the pandemic this presents an option to quickly restore air service.

“Although the pandemic has challenged the airline industry, we believe that quality air services will continue to be highly desired and vital for the transportation of people and goods throughout the U.S.,” said Heller. “With a cost structure second to none, we aspire to set a new standard in aviation by delivering a culture rich in safety, customer service and professionalism to our passengers, partners and associates.”

Wexford Capital LP previously announced that it and certain affiliates received bankruptcy court approval to reorganize and acquire Via Airlines, Inc., a FAA Part 121 regional airline based in Maitland, FL. The transaction allowed Via, which was rebranded as Sterling Airways, to restart domestic operations, once approved by the DOT and recertified by the FAA.

Wexford Capital has made this announcement:

Wexford Capital LP announced that it and certain affiliates received bankruptcy court approval to reorganize and acquire Via Airlines, Inc., a FAA Part 121 regional airline based in Maitland, FL. This transaction allows Via, which will be rebranded, to restart domestic operations, once approved by the DOT and recertified by the FAA. The new airline will be supported by a highly experienced management team.

The reorganized company intends to provide regional air services in strategic markets that have been crippled in the wake of COVID-19. The Company’s new management team will be led by former COO of Republic Airways, Wayne Heller who will serve as the Company’s CEO.

“We are evaluating initial launch markets and strategic partnerships, including, but not limited to, the Southeast, Midwest and Alaskan markets,” said Heller.  “Although the Pandemic has decimated and challenged the airline industry today, we believe that a quality regional air services provider will continue to be highly desired and vital for the transportation of people and goods throughout the U.S for the foreseeable future, and we intend to be part of that solution”, Heller went on to say.

Wexford has a long track record of investing in the airline industry, such as founding and driving the transformation of Republic Airways into a regional airline with over 200+ modern regional jets.

Via Airlines on October 8, 2019 announced it was filing for Chapter 11 bankruptcy and ceased all operations.

Via Airlines (Orlando) filed for Chapter 11 reorganization on October 8 according to the Orlando Business Journal.

The previously scheduled carrier had reverted to a charter airline.

Via Air has suspended service to Pittsburgh as well as service to all Alabama airports including Birmingham and Mobile.

The company is blaming the challenge of recruiting and training flight crews as the main reason for the withdraw.

Via Airlines has announced nonstop service to two new destinations from Memphis, Tenn., making Memphis International Airport (MEM) a key part of their ongoing expansion efforts throughout the mid-west and the northeastern U.S. The new destinations include nonstop service to Pittsburgh, Pa., and Austin, Texas, with the first flight taking off from Memphis June 25, 2019.

The new nonstop flights in and out of Memphis will operate four times each week on Mondays, Tuesdays, Wednesdays, and Fridays through the Memphis International Airport (MEM) on ViaAirlines’ 50-seat Embraer ERJ 145 jets.

Via Airlines also announced nonstop service from Raleigh, N.C. to Birmingham, Ala., making Raleigh-Durham International Airport (RDU) a key part of their ongoing expansion efforts throughout the southeastern U.S. The first flight on this new nonstop route between Raleigh and Birmingham, Ala., takes off April 11, 2019.

The new nonstop flight in and out of Raleigh/Durham will operate four times each week on Sundays, Mondays, Thursdays, and Fridays through the Raleigh-Durham International Airport (RDU) on Via Airlines’ 50-seat Embraer ERJ 145 jet.

Finally Via Airlines announced nonstop service to four new destinations from Pittsburgh, Pa., making Pittsburgh International Airport (PIT) key to their ongoing expansion efforts throughout the northeast. The new destinations include nonstop service to Birmingham, Ala.; Memphis, Tenn. and Hartford, Conn., with through service to Austin, Texas, from Memphis. The first flight from Pittsburgh takes off in April with other routes flying in June and July of 2019.

Now serving a total of 19 cities across the U.S., these route announcements are part of the established carrier’s largest expansion to date. Three new focus cities were announced at the same time as Memphis and Pittsburgh, including Hartford, Conn., Birmingham, Ala. and Raleigh, N.C.

Via Airlines (Via Air) has announced further expansion of its network with new nonstop service between its headquarters at the Orlando Sanford International Airport and the cities of Columbia, SC, and Tallahassee, FL.  These new cities are in addition to Via Airlines’ current service from the Orlando Sanford International Airport to Baton Rouge, LA, Charlotte, NC, Jackson, MS, Mobile, AL, and Montgomery, AL.

Via Airlines has announced further expansion of its network with new nonstop service between its headquarters at the Orlando-Sanford International Airport and the cities of Columbia, SC, and Tallahassee, FL.

These new cities are in addition to Via Airlines’ current service from the Orlando-Sanford International Airport to Baton Rouge, LA, Charlotte, NC, Jackson, MS, Mobile, AL, and Montgomery, AL.

The carrier will also launch service from Sanford to Mobile and Montgomery on May 14.

Service between the two cities begins May 24, 2018, operating through September 3, 2018. Flights will be available Thursday, Saturday and Sunday each week with occasional (additional) service on Friday.

The airline will also add service from Austin to Oklahoma City on April 22, Little Rock on April 29 and Tulsa on May 6 per Airline Route.

All flights will be operated with Embraer ERJ 145 regional jets.

ViaAir plans to base crews and maintenance at the Austin-Bergstrom International Airport, positioning its Austin based operations to expand.

ViaAir is partnering with Embark Aviation to commercially manage these flights which includes: pricing, revenue management, network planning, and marketing functions. This innovative air service model allows ViaAir to plug major airline commercial planning functions into its operations and permitting Via the ability to focus their resources and expertise on the operational functions of the airline.

Founded in 1997, ViaAir is an aviation company offering daily scheduled flights, charters and AirCruise vacation packages. The airline operates domestic and supplemental operations and was the first to be certified in the FAA’s Part 5 Safety Management System, ensuring the highest level of safety in the aviation industry. The airline operates a fleet of Embraer ERJ-145s with 50 seats. 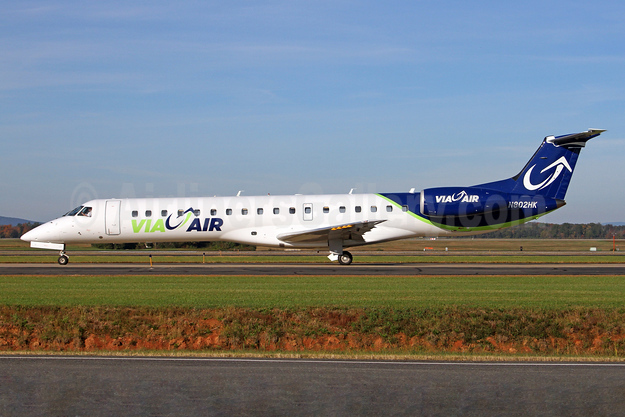 Both routes will be operated with Embraer ERJ 145 regional jets according to Airline Route.

ViaAir LLC is an indirect Air Carrier operating under DOT Regulation 14 CFR 380 together with its subsidiary, Charter Air Transport d.b.a. Via Airlines, as the Direct Air Carrier on 30 Pax EMB-120 and now Embraer ERJ 145 regional jets.