French bee made this announcement:

French bee, sister French airline of Air Caraïbes and a subsidiary company of the Dubreuil Group, is proud to announce that it has made the longest nonstop domestic commercial flight between Tahiti-Faa’a and Paris-Orly with one of its new generation Airbus A350-900s. The A350-900, registration F-HREY, took off from Tahiti-Faaa International Airport at 10.51am on Thursday, May 14, 2020 and landed at Orly at 3:40pm LT on Friday, May 15, 2020. The flight time was 16:49 hours, to cover a route of more than 16,129 kilometers.

Previously on Tuesday, May 12, 2020, the aircraft had carried out a cargo-only flight from Orly to Tahiti-Faa’a with a stopover in Pointe-à-Pitre (Guadeloupe). The flight carried 20 tons of medical supplies for French Polynesia. This flight, managed by Hiline Cargo, a specialized subsidiary of the Dubreuil Aéro Group, was loaded by SIFA Logistics.

“The flight was carried out under standard performance conditions of the Airbus A350, with an average altitude of 12,500 meters, at a speed of 940 km/h. The A350’s fuel consumption qualities, 25% less than a conventional long-haul aircraft, enabled it to cross these 16,129 kilometers. “Explains, Ludovic André, Director of Air Operations and Chief Pilot of French bee. 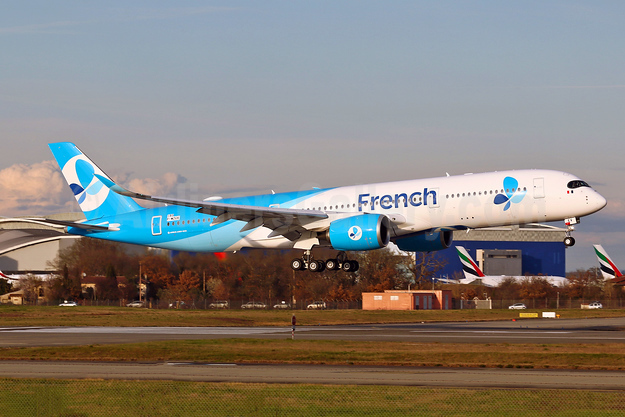 French Blue, as previously reported, announced on January 30, 2018 it was changing its name to French Bee to avoid any confusion with JetBlue Airways for its new Paris (Orly) – San Francisco – Papeete, Tahiti service.

However the first aircraft (above) has been painted by Airbus and the aircraft only has “French” titles.

French Blue Airlines (Paris-Orly) announced on January 30, 2018 it was changing its name to French Bee to avoid any name conflict with JetBlue Airways.

French Bee has now announced it will now start the Paris (Orly) – San Francisco – Papeete (Tahiti) route on May 11, 2018 after receiving DOT approval. The new route will operate two days a week with Airbus A350-900 aircraft.