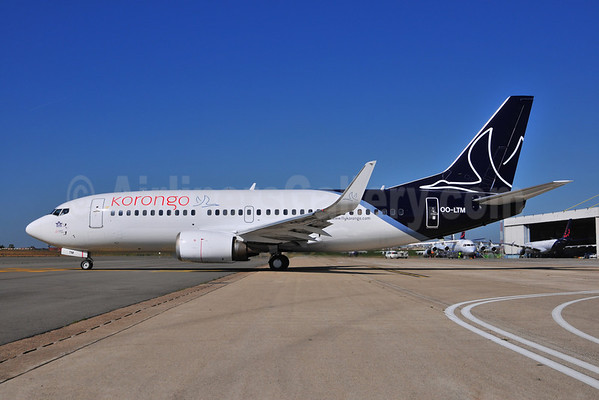 Korongo Airlines (Lubumbashi, Democratic Republic of the Congo) will not fly again. Yesterday (September 4) the investors decided not to restart flight operations and took the additional step to dissolve the company.

An incident a week prior to the decision grounded their only airplane, the pictured Boeing 737-3M8 OO-LTM (msn 25070) (above). The aircraft, on lease from Brussels Airlines, was damaged on August 19 on takeoff at Bipemba Airport at Mubuji-Mayi. The carrier was forced to cease operations until the decision to liquidate was made.

The airline started operations on April 16, 2012 with the help of Brussels Airlines.

We regret to announce that due to the extraordinary general meeting of shareholders of Korongo Airlines held on September 4 in Lubumbashi, the decision was taken to stop the activity of the airline, which is put into liquidation.

This decision was taken because of the operating conditions extremely difficult encountered until now and the decision taken by the Congolese government to launch a new national airline against which we will not be able to compete in a spirit of search of profitability.

Korongo Airlines would like to thank all our customers for their trust and expresses its sincerest apologies for the inconvenience caused by the judgment of its activities.

It goes without saying that korongo airlines will continue to take its responsibilities vis-à-vis its clients and invite any passenger who is in possession of a ticket to a trip after the September 4, 2015 to contact the company to the attention of the Liquidator who has been appointed, Mr Patrick William, at the following coordinates:

We thank you for your understanding.

Copyright Photo: Ton Jochems/AirlinersGallery.com. The airline name was based on the Swahili term for large migrating birds.

Brussels Airlines (Brussels) has received approvals from the Democratic Republic of the Congo to launch Korongo Airlines (Lubumbashi).

Korongo is now planning to start operations in the spring of 2012. Korongo will offer regular scheduled flights between Lubumbashi and Kinshasa as well as between Lubumbashi and Johannesburg, both with Boeing 737-300s leased from Brussels Airlines. Mbuji Maji and Kolwezi will also be added to the network from Lubumbashi by BAe146-200 aircraft. Korongo is also planning to start flights from Lubumbashi to Kampala, Kigali and Bujumbura in cooperation with Brussels Airlines. 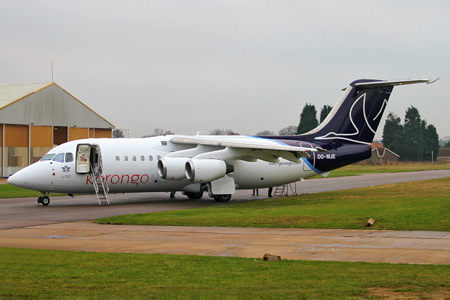 Korongo Airlines (Lubumbashi) is a new airline in the Democratic Republic of the Congo. The new venture is planning to operate scheduled passenger flights. The airline project is a joint-venture betweenBrussels Airlines (Brussels) and the Belgian multinational Groupe George Forrest International, with full technical support from Lufthansa (Frankfurt).

The name “Korongo” is a Swahili term for large migrating birds.

The first revenue flight is planned for the first quarter of this year from Lubumbashi and Kinshasa to Johannesburg. The airline will operate a pair of BAe 146-200s and one Boeing 737-300.

Brussels Airlines has been striving to create a subsidiary in the Democratic Republic of the Congo, a former Belgian colony, dating back to October 2007. At that time a joint venture with Hewa Bora Airways was announced, called airDC (Kinshasa). AirDC never launched any flights although this aircraft was painted in their colors.

On December 15, 2009, Brussels Airlines cancelled the airDC project and announced the launch of Korongo Airlines. The company was officially established on April 13, 2010.

Copyright Photo (above): Keith Burton. Brussels Airlines’ BAe 146-200 OO-MJE (msn E2192) was rolled out in this livery at Southend on February 1, 2011. It headed for Brussels. OO-MJE will operate two dedicated routes for Brussels Airlines out of Brussels for a few weeks before delivery to Africa.

Copyright Photo (below): Karl Cornil. BAe 146-200 OO-MJE when it was in the colors of non-starter airDC.