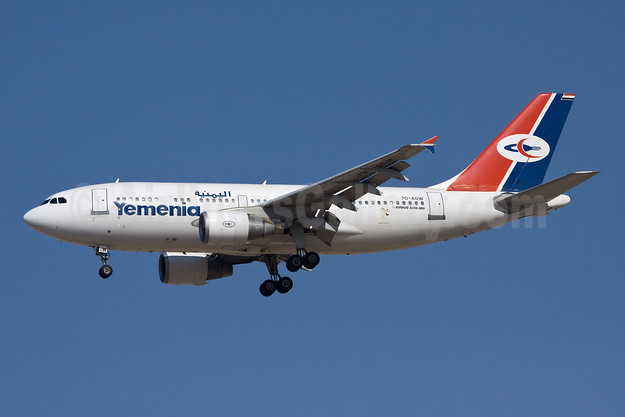 Yemenia – Yemen Airways has suspended all operations. The flag carrier made this short announcement:

“Since we were not given the flight permits for the flights tomorrow, Wednesday, November 8, 2017, Yemen Airlines apologizes for suspending all of their flights until further notice.”

According to The Times,

“Saudi Arabia has forced the closure of all ports, airports and borders in Yemen in response to a missile attack by Iranian-backed Houthi rebels on Riyadh Airport on Saturday night.

As a result the United Nations has stopped all aid deliveries to the country, where more than 20 million people are going hungry and 800,000 have been struck by a cholera epidemic.”

The pictured Boeing 747SP-27 7O-YMN (msn 21786) was operated by Yemenia (Yemen Airways) (Sana’a) as a presidential airplane for the government. However the country of Yemen is currently locked in a civil war and a governmental crisis since 2011. The “government” of Yemen in essence is now gone and so is their presidential aircraft.

The war-torn county (below) has become a conflict zone between the Houthis and Islah, as well as the al-Qaeda insurgency.

According to Wikipedia, “In September 2014, the Houthis took over Sana’a, forcing Ali Mohsen al-Ahmar to flee the country, and prompted the formation of a new “unity government” including a variety of Yemeni factions. A draft constitution was discussed that would split Yemen into six federal regions, but the Houthis rejected the proposal. Hadi, his prime minister and cabinet resigned on January 22, 2015 amid a political impasse against the Houthis and ongoing violence in the capital. Three weeks later, the Houthis declared themselves in control of the government in what Abdul-Malik al-Houthi called a “glorious revolution”, although opposition politicians, neighboring states, and the United Nations decried the takeover as a coup d’état. Most of Yemen’s political factions and the international community have refused to recognise the Houthis’ authority, and UN-brokered talks on a power-sharing deal are ongoing. However, on February, 21, 2015 Hadi rescinded his resignation and declared he was still the legitimate president in Aden. Hadi called on government institutions to gather in Aden, which he proclaimed on March 21, 2015 was Yemen’s “economic and temporary capital” while Sana’a remains under Houthi control.”

7O-YMN has now been discovered as destroyed at Aden this month after Saudi-backed Yemeni forces recaptured Aden. The exact date of the destruction is unknown.

Meanwhile on March 30, 2015, as previously reported, Yemenia was forced to suspend all operations due to the on-going military conflict in the divided county which affected its base at Sana’a International Airport. Some aircraft, including 7O-YMN, had been moved to Aden as it was deemed to be relatively safe. However it was not safe for 7O-YMN.

This is the unglamorous end of this “Queen of the Skies”.

MSN 21786 started its airline career on April 23, 1980 when it was delivered brand new from Boeing to Braniff International Airways (Dallas) as N604BN (below).

The Jumbo would next migrate to Aerolineas Argentinas as LV-OHV on September 12, 1980 where it would serve AR for almost 10 years (below).

The airframe would next enter the VIP transport market, flying for the government of Qatar as the Qatar Amiri Flight as A7-AHM on February 7, 1996. Next it would move to Yemenia for the Yemen government on November 26, 2000 as 7O-YMN. The jetliner has been flying in Yemen colors for the past almost 15 years until this final blow. A sad end indeed.

Yemenia (Yemen Airways) (Sana’a) has signed a Memorandum of Understanding (MOU) to acquire 10 Airbus A320 Family aircraft at the Dubai Air Show.

Yemenia (Sana’a) is upset at France and is threatening to cancel its order for 10 Airbus A350s.

Yemenia (Sana’a) today is operating its last flight between Sana’a and Moroni in the Comoros Islands after suffering its recent tragic crash in the islands. It will no longer serve the route.

Please click on photo for full view, information and other crashed aircraft.

Yemenia (Yemen Airways) (Sana’a) lost its Airbus A310-304 7O-ADJ (msn 535) this morning with 142 passengers and 11 crew on board. The jetliner was flying flight IY 626 between Sana’a and Moroni (Comoros Islands) in the Indian Ocean. The aircraft crashed into the sea near Mitsamiodi (Comoros) while on approach to Moroni. Rescue ships and aircraft are searching for any possible survivors. One child has already been rescued.