XL Airways has reached out to Air France to rescue the ailing French carrier. XL Airways wants to discuss a possible deal with Air France to infuse capital into the company to avoid a shutdown. The airline needs $38.6 million to avoid a complete shutdown according to Reuters.

Read the full report from Reuters.

“XL Airways, in major financial difficulty, is unfortunately obliged to stop ticket sales as from September 19,”

The company is expected to go into receivership today.

Based at Paris Charles de Gaulle Airport, XL Airways also operates flights from Marseille and Lyon to Reunion island and flights from Lyon and Nantes to French West Indies.

The airline hopes to fly some flights through September 23.

The airline was operating Airbus A330 aircraft: 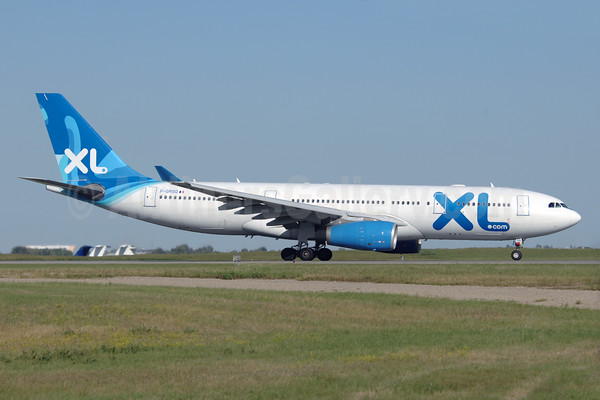 XL Airways (France) (Paris-CDG) will return to Miami for the second summer in a row. The French airline will offer three flights a week with its 408-seat Airbus A330-300s from May 25 until August 31.

Miami has become the second most important North American destination for XL Airways after New York.

Additionally, as previously reported, AirEuropa will also return for the summer to Miami from Madrid with three weekly flights starting on June 4.

Routes to the Western Hemisphere:

XL Airways France (Paris) expands its Airbus fleet following the delivery of its first brand new A330-300 from the manufacturer’s headquarters in Toulouse, France. The pictured A330-303 F-WWKA (msn 1360) was handed over on November 30 as F-HXLF.

Operated under a leasing agreement with GECAS, the aircraft is powered by GE CF6-80E engines. XL Airways France will fly its new A330-300, configured in a single-class layout with 408 seats, to destinations in the French Caribbean starting in December 2012. Specifically the airline will introduce its first Airbus A330-300 aircraft on the Paris (CDG)-Punta Cana route on December 8, followed by Pointe-a-Pitre on December 15, Fort-de-France on December 17 and Puerto Plata on December 23 per Airline Route.

This brand new aircraft will join the Airbus fleet already operated by XL Airways France, comprising two A330-200s and one A320.

XL Airways France (XL.com) (Paris-CDG) will add seasonal twice-weekly Airbus A330-200 flights linking Paris (CDG) and San Francisco from May 26, 2012 through September 8, 2012 according to Airline Route.

Please click on the AG icon for a direct link to the XL Airways France photo gallery.

XL Airways France (XL.com) (Paris-CDG) will start seasonal charter service from CDG to Las Vegas on May 23 and operate through October 3. The new route will be operated with Airbus A330-200s and operate twice-weekly according to Airline Route Updates.