Embraer announced today, at the 53rd International Paris Air Show, that it has signed a contract with Japan’s Fuji Dream Airlines (FDA) for a firm order of two E175 jets. The order has a value of $97.2 million, based on 2019 list prices, and was already included in Embraer’s 2019 first-quarter backlog as “undisclosed.”

FDA’s new E175s will be configured in a single-class layout with 84 seats, with deliveries starting in 2019. Embraer delivered the first E-Jet, an E170, to Fuji Dream Airlines in 2009.

The E175 is the best seller of the E-Jets family with more than 770 orders from airlines and lessors around the world. Since January 2013, Embraer has sold more than 565 E175s to airlines in North America alone, earning more than 80% of all orders in the 70-76-seat jet segment.

FDA and Embraer have also signed an extension of the Pool Program to cover its fleet of E170s and E175s, including these new orders. The program includes the advance exchange and repair management for more than 300 essential line replacement units of the aircraft. 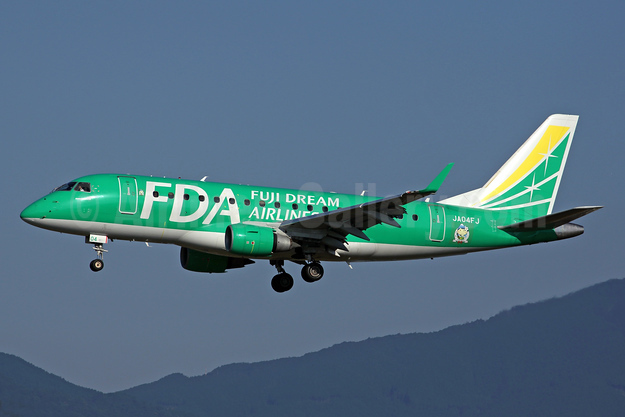 Each aircraft features an unique color making for a very colorful fleet (below).

Photos: FDA (above) and Embraer (below).

Embraer S.A. has signed an agreement with FDA-Fuji Dream Airlines (Makinohara, Shizuoka, Japan) for a firm order of three E175s with options for an additional three aircraft of the same model.

This order was already included in Embraer’s 2014 second quarter backlog as an “undisclosed” customer. The announcement was made today at the 2014 edition of the Farnborough International Airshow. Three E170s and five E175s are currently in operation with Fuji Dream Airlines.

The newly-ordered E175s will be configured in a single-class layout with 84 seats and will be equipped with the Autoland system to perform CAT III approach and landing in limited visual conditions. The new E175s will also feature recent aerodynamic enhancements introduced by Embraer, such as a new wingtip and other technical improvements that reduce fuel burn.

Created in 2007, FDA started operations with two Embraer E170s. Over the last five years, its all-Embraer fleet has quadrupled. FDA’s fleet is instantly recognizable by its brightly coloured aircraft, some of which are painted green, pink, yellow and purple.

With aircraft based in Nagoya and Shizuoka, FDA links twelve secondary cities in Japan where demand is growing, such as Fukuoka, Sapporo and Hanamaki. Operating almost 50 flights each day, the airline has carried over 2.4 million passengers to date. FDA is part of the Suzuyo Group, which owns a full-flight simulator to provide pilot and fleet engineering training for its staff.

Fuji Dream Airlines was incorporated in June 2008 to be the Suzuyo Group’s air transportation arm. By entering the airline business and building on the convenience of Mt. Fuji Shizuoka Airport, Suzuyo contributes to Shizuoka’s economic development.

Copyright Photo: Akira Uekawa/AirlinersGallery.com. Embraer ERJ 170-200ST (ERJ 175) JA06FJ (msn 17000332) is one of the latest additions to the colorful fleet. Each aircraft is painted in a different color. JA06FJ taxies at the Mount Fuji Shizuoka Airport (FSZ).

FDA-Fuji Dream Airlines (Makinohara, Shizuoka) of Japan, has signed a contract for two Embraer ERJ 175 jets, in a ceremony held at the headquarters of the airlines’ parent company, Suzuyo Corporation in Shimizu, Japan. The total value of the deal is $81.6 million, at list prices, which will be included in Embraer’s fourth quarter of 2012 backlog. Both aircraft will be configured in a single-class layout with 84 seats. This order brings the total number of aircraft in the airline’s all-E-Jet fleet to eight.

These aircraft will be equipped with Autoland systems to perform CAT III approach and landing in limited visual conditions. This system assures on-time performance of aircraft and avoids diversions or delays due to weather. In line with FDA’s brand, each of these aircraft will be painted in a different color. The colors of the six E-Jets in the airline’s current fleet are red, light blue, green, orange, pink and purple (see below).

FDA is conducting an online contest to determine the color of its seventh Embraer E-Jet (see below – in Japanese):

Created in 2007 as a low-cost operator, FDA initially ordered two E170 jets for its start-up operations from Shizuoka in July 2009. In that same year, FDA ordered another E175, and subsequently added one E170 and two E175 jets between 2010 and 2011, thereby tripling its initial fleet in less than 3 years of revenue service.

With aircraft based in Nagoya and Shizuoka, FDA links secondary cities in Japan where demand is growing. The six E-Jets in FDA’s current fleet covers a network of 10 stations spread across Japan such as Fukuoka, Niigata, Aomori and Sapporo. The airline has carried over 1.3 million passengers to date. It operates 40 daily flights and has been doing so with an outstanding schedule reliability of 99.5% on average for the last 12 months.

Copyright Photo: Nobuhiro Horimoto. Please click on the photo for additional information on this colorful airline.

FDA-Fuji Dream Airlines (Makinohara, Shizuoka) has signed a firm contract for an additional Embraer ERJ 175, which is the fifth E-Jet in the airline’s fleet. The new aircraft will be configured in a single class with 84 seats. The order also includes an option for one additional aircraft of the same model. This order is already included in Embraer’s firm order backlog for the third quarter of 2010, as“Undisclosed” customer.

Copyright Photo: Daryl Chapman. JA03FJ climbs away from a very damp and overcast Hong Kong. This is the third aircraft for FDA and each is painted in a different color. This is the first to wear pink.