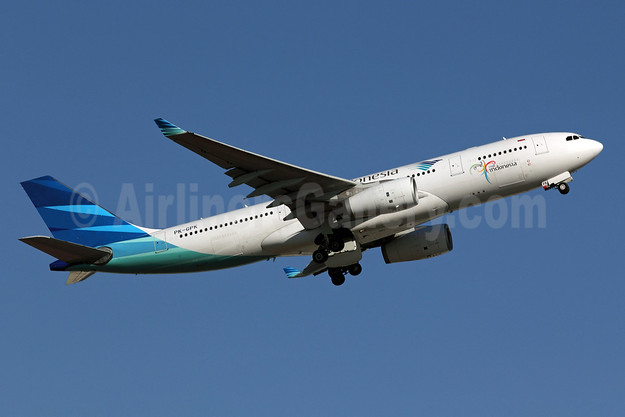 The 5-Star certification process is carried out through the “Skytrax Audit” process, with detailed assessment points covering every flight aspect, from pre-flight to in-flight and through to post-flight; such as quality of passenger service at the airport, quality of the waiting room, the comfort of the cabin, the inflight meal, the in-flight entertainment, to the service by the cabin crew.

In order to strengthen the company’s financial and operational performance, Garuda Indonesia and its subsidiaries work to a long-term business strategy entitled Garuda Indonesia Group, Sky Beyond 3.5, with a goal of being a value-driven aviation group with an achievement of 3.5 billion USD target on 2020 . 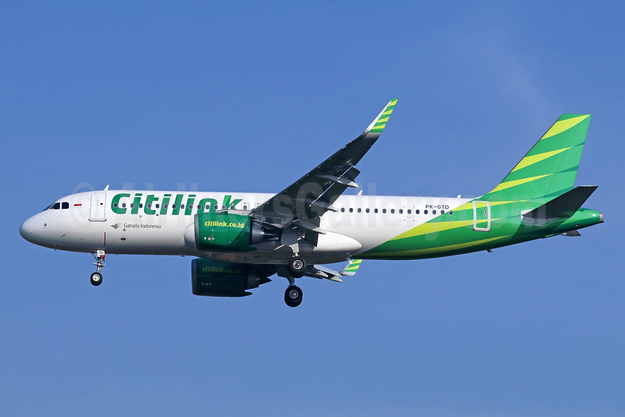 Citilink, the low-cost unit of Garuda Indonesia, has taken delivery of its 50th A320 Family aircraft at Airbus headquarters in Toulouse, France. The aircraft, an A320neo, can seat up to 180 passengers in a single class layout.

The aircraft has been delivered with a special livery to commemorate the milestone, and it joins another 45 A320ceo and four A320neo that are already in service with the airline.

Citilink has selected CFM LEAP-1A engines to power its A320neo fleet, and has 30 more of the aircraft on order for future delivery. It is using its growing fleet of Airbus single-aisle aircraft to expand its domestic and regional network.

Citilink (subsidiary of Garuda Indonesia) (Jakarta) Airbus A320-214 PK-GQG (msn 6333) operating flight QG 970 on August 2 from Jakarta (CGK) to Padang (PDG) with 174 passengers and crew members left the runway on landing at Padang in the rain. The aircraft was evacuated using the emergency chutes. Three people were injured according to Reuters. The incident also shut down the airport in western Indonesia.

Citilink (Jakarta), the low cost subsidiary of Garuda Indonesia (Jakarta), has placed a firm order with Airbus for 25 A320neo. The contract, signed in December 2012, represents the first direct purchase by Citilink from Airbus. It follows an order placed in 2011 by Garuda Indonesia for 15 A320ceo and 10 A320neo aircraft for operation by Citilink.

Incorporating new engines and large “Sharklet” wing tip devices, the A320neo Family will deliver fuel savings of 15 percent. The reduction in fuel burn is equivalent to 1.4 million litres of fuel – the consumption of 1,000 mid size cars, saving 3,600 tonnes of C02 per aircraft per year. In addition, the A320neo Family will provide a double-digit reduction in NOx emissions and reduced engine noise.

With close to 8,900 aircraft ordered and over 5,300 aircraft delivered to over 380 customers and operators worldwide, the A320 Family is the world’s best-selling single-aisle aircraft family.

Citlink (Jakarta), the low-fare subsidiary of Garuda Indonesia Airways, has announced the signing of a lease agreement for six new Airbus A320 aircraft. The aircraft will be powered by CFM56-5B engines.

The aircraft comes from GECAS’ existing order book with Airbus and are scheduled for delivery in the first half of 2013.

Garuda Indonesia Airways (Jakarta) has finalized an order with Airbus for the purchase of 25 A320 Family aircraft, firming up an MOU announced during the Paris Air Show in June. The order makes Garuda Indonesia a new A320 Family customer and covers 15 standard A320s and 10 A320neo aircraft for operation by the carrier’s low cost unit Citilink.

Image: Airbus. Citilink will introduce this new green version of Garuda’s livery with the introduction of these new aircraft.

Garuda Indonesia (Jakarta) has signed a Memorandum of Understanding (MOU) with Airbus for the purchase of 25 A320 Family aircraft, making the airline a new customer for the Airbus single aisle product line. The MOU covers 15 standard A320s followed by 10 A320neo aircraft for operation by the carrier’s domestic low cost unit Citilink, replacing its existing Boeing 737 fleet.