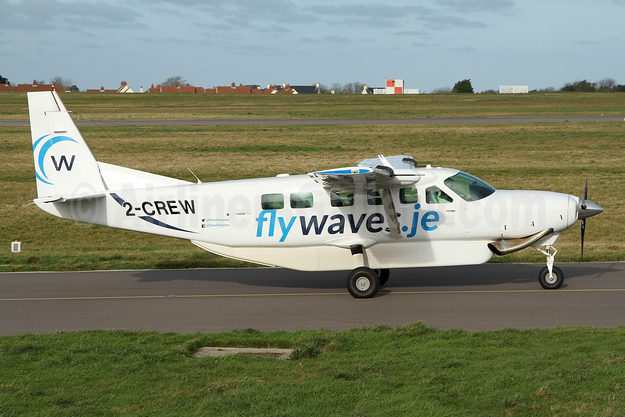 Waves in the Channel Islands has cancelled all flights until September 1, 2018.

According to ITV News, founder Nick Magliocchetti stated the company will refocus and restructure and also look at how it can expand its fleet and routes during this period.

Waves will again be able to sell single seats to Jersey and Alderney after its air transport licence application was granted.

The carrier had been operating as an on-demand air taxi.

Blue Islands in December issued this complaint against newcomer Waves. Here is the statement:

Blue Islands has lodged formal legal action with Guernsey’s Royal Court after repeatedly calling on the island’s Transport Licensing Authority to exercise its powers to ensure Waves Technologies Limited apply for the necessary route licences to operate passenger services between Guernsey and Jersey.

The central issue is Waves’ lack of a Guernsey Air Transport Licence, in respect of any aircraft being used for the carriage for reward of passengers or cargo on a flight beginning or ending in Guernsey. This is a requirement of the Air Transport Licensing Law, with Section 1 being quite explicit about this. Not holding one means Waves operations are illegal.

For many months, Blue Islands have repeatedly written to the chair of the Transport Licensing Authority, and have not received any adequate response. The decision to call for a judicial review is intended to compel the Authority to act to uphold the law it is meant to enforce and protect the travelling public from an operator acting outside of the rules. If Blue Islands started operating a daily service on any Aurigny route under the claim of being an air taxi, the TLA would step in and stop it. That is exactly what should have happened here.

Competition on the inter-island route is nothing new, and Blue Islands continues to face it every day with Flybe – even though it is a franchise partner, a seat sold on a Flybe aircraft is of no value to Blue Islands. Previously, Blue Islands and Aurigny vigorously competed on the route, and each lost £1m. a year in the process. Blue Islands believes in competition, and are happy to compete on any of its routes, but competition must be on a level playing field – and not from an operator ignoring the laws. The Air Transport Licensing Law and associated policy statement insists the impact of a new operator on any route is considered and the incumbent operator is given the chance to make an official representation. By ignoring the law the Transport Licensing Authority has denied Blue Islands this opportunity.

Furthermore, Blue Islands is becoming increasingly concerned that innocent investors, caught up by Waves marketing activities are being lured into investing significant sums of money into what they believe to be an innovative ‘air taxi’ service that requires no route licence. Blue Islands do not believe Waves is operating as a legitimate air taxi service and the TLA must evaluate Waves’ claim. This review will ensure all relevant parties formally appraise the legitimacy of Waves business model, its financial fitness and viability, including its recent £17.5m. self-valuation from a business without any tangible means of justifying such a figure either through its trading volumes, asset base or additional markets for an as-yet non-existent product. Although this falls outside the legal action, the clarity this case will bring should usefully serve to protect potential investors from harm. If Waves fails, Guernsey could very well suffer unquantifiable reputational damage.

Air services between Guernsey and Jersey must remain sustainable and continue to provide regular, scheduled services which benefit the whole travelling community – and not just those who can afford the higher Waves ticket price.

Blue Islands is commencing this judicial review to end what is, purely and simply, illegal activity.