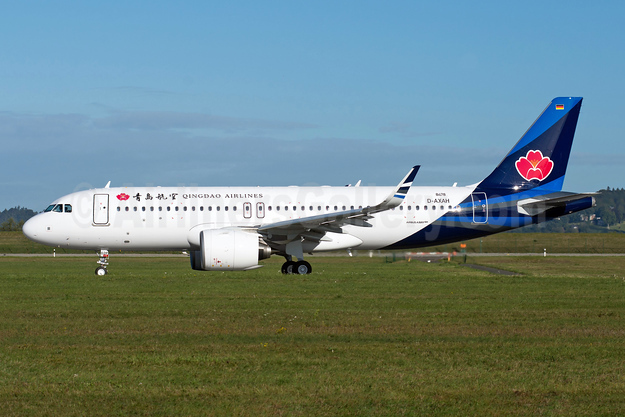 Qingdao Airlines, founded in 2013 and headquartered in Qingdao, Shangdong, China, announced its selection of the GTF engine to power an order of 18 firm A320neo family aircraft in November 2016.  The airline offers domestic and international flight services to destinations across China and Northeast Asia.

Qingdao Airlines (Qingdao, Shandong Province), a Chinese start-up airline, has taken delivery of the company’s first ever aircraft, an Airbus A320 aircraft equipped with Sharklets, on lease from Hong Kong-based China Aircraft Leasing Company (CALC). The airline will become a new operator and make its first commercial flight from its home base of Qingdao in Eastern China to Chengdu, capital city of Sichuan Province in Southwestern China, later in April.

The A320, powered by CFM56 engines, features a comfort two-class cabin with eight business and 144 economy class seats.

Sharklets are made from light-weight composites and are 2.4 meters tall. They are an option on new-build A320 Family aircraft and standard on all members of the new A320neo family. They offer operators up to four per cent fuel burn reduction on longer range sectors and provide the flexibility of either adding an additional 100 nautical miles range or increased payload capability of up to 450 kilograms.

Qingdao Airlines placed an order for 23 A320 Family aircraft in 2013 (see photo below).

Top Copyright Photo: Gerd Beilfuss/AirlinersGallery.com. The pictured A320-214 D-AXAJ at Hamburg (Finkenwerder) became B-9955 (msn 6061) on the hand over yesterday (April 10).

Qingdao Airlines, a newly established airline based in the Eastern Chinese coastal city of Qingdao, Shandong Province, has selected the Airbus A320 Family aircraft to build up its fleet.

The airline has signed a purchase agreement with Airbus for a total of 23 A320 Family aircraft, including five A320ceo and 18 A320neo aircraft. The agreement was signed by He Li, director of the Board of Qingdao Airlines and John Leahy, Airbus Chief Operating Officer Customers at the 15th Aviation Expo China 2013 in Beijing. The deal is subject to approval from China’s central government. The first delivery is expected to begin in 2016. The airline will start operation in 2014 with leased A320 aircraft.