Bureau of Industry and Security (BIS) Assistant Secretary for Export Enforcement Matthew S. Axelrod issued orders denying the export privileges of three Russian Airlines – Aeroflot, Azur Air, and UTair – due to ongoing export violations related to comprehensive export controls on Russia imposed by the Commerce Department. These three Temporary Denial Orders (TDOs) terminate the right of these airlines to participate in transactions subject to the Export Administration Regulations (EAR), including exports and reexports from the United States. Today’s TDOs are issued for 180-days and may be renewed.

“The Biden Administration has imposed historic sanctions on the Russia for the unwarranted aggression happening in Ukraine. With today’s temporary denial orders, the Department of Commerce takes another significant action to hold Putin and his enablers accountable for their inexcusable actions,” said Commerce Secretary Gina M. Raimondo. “We are cutting off not only their ability to access items from the United States but also reexports of U.S.-origin items from abroad. Any companies that flout our export controls, specifically those who do so to the benefit of Vladimir Putin and the detriment to the Ukrainian people, will feel the full force of the Department’s enforcement.”

“The images we are seeing coming out of Ukraine demonstrate Vladimir Putin’s barbarism, brutality, and blatant disregard for human life. The Department of Commerce, along with the entire Biden-Harris Administration, have taken swift and unprecedented action to ensure that Russia, and its enablers, pay a price for their actions,” said Deputy Secretary of Commerce Don Graves. “We are already seeing the impact of the Commerce Department’s export controls, with U.S. exports to Russia of items subject to new licensing requirements have decreased by 99 percent by value compared to the same time period last year. With today’s action we send a clear message to those who deliberately disobey those same controls: defy our export controls at your own peril.

“Companies that violate the expansive export controls we have imposed on Russia will find themselves the target of Commerce Department enforcement action,” said Assistant Secretary of Commerce for Export Enforcement Matthew S. Axelrod. “With our allies and partners, we will continue to stand with the people of Ukraine as they respond to Russia’s unprovoked and brutal invasion of their country.”

The TDOs issued represent the first enforcement actions taken by BIS in response to Russia’s unprovoked and brutal invasion of Ukraine, and the severe restriction in export privileges of these companies is a reminder to parties in Russia as well as throughout the rest of the world that U.S. legal authorities are substantial, far-reaching, and can have a meaningful impact on access to global commerce by parties found to be in violation of U.S. law.

BIS has led the Department of Commerce’s efforts in response to Russia’s invasion of Ukraine by taking a number of powerful regulatory actions and issuing public notice to the global community as to potential violations of the EAR in the civilian aerospace sector.

On February 24, 2022, BIS imposed expansive controls on aviation-related items to Russia, including a license requirement for the export, reexport or transfer (in-country) to Russia of any aircraft or aircraft parts on the Commerce Control List.

On March 2, 2022, BIS further excluded any aircraft registered in, owned, or controlled by, or under charter or lease by Russia or a national of Russia from being eligible for license exception Aircraft, Vessels, and Spacecraft (AVS). Accordingly, any U.S.-origin aircraft or foreign aircraft that includes more than 25% controlled U.S.-origin content is subject to a license requirement if, for example, it is Russianowned or operated and exported to Russia.

Note: Russia has since re-registered these foreign aircraft to the Russian registry, probably to avoid confiscation and to confuse the situation.

On March 18, 2022, BIS publicly released a list of private and commercial aircraft it had been tracking as likely operating in violation of the EAR. This action notified the public that, absent authorization from BIS, the operation of, or service to, any aircraft on the list or owned by Russian parties in violation of the EAR may lead to enforcement actions from BIS, which may include substantial jail time, fines, loss of export privileges, or other restrictions. BIS further updated the list on April 30, 2022 and will continue to maintain and update the list as circumstances warrant.

The list and additional information on BIS’s actions in response to the Russian invasion is available online here: https://bis.doc.gov/index.php/policy-guidance/country-guidance/russia-belarus.

Aeroflot, Utair, and Azur Air engaged in and continue to engage in recent conduct prohibited by the EAR by operating controlled aircraft subject to the EAR without the required BIS authorization. Pursuant to Section 746.8 of the EAR, all international flights conducted by the aforementioned airlines into Russia would have required export or reexport licenses from BIS. Additionally, any domestic Russian flights by the same airlines on aircraft reexported to Russia after March 2, 2022 without the required BIS license are also in violation of General Prohibition Ten (GP10). GP10 prohibits continuing with transactions knowing that a violation has occurred or is about to occur.

• Aeroflot operated multiple aircraft subject to the EAR, including, but not limited to, on flights into and out of Moscow, Russia from/to Beijing, China; Delhi, India; Antalya and Istanbul, Turkey; and Dubai, United Arab Emirates, respectively. Aeroflot subsequently operated some of the same aircraft on domestic flights between Moscow, Russia and Vladivostok, Russia and Petropavlovsk-Kamchatsky, Russia, respectively.

• UTair operated multiple aircraft subject to the EAR, including, but not limited to, on flights into and out of Russia from/to Khujand and Dushanbe, Tajikistan; Yerevan, Armenia; Baku and Ganja, Azerbaijan; Jeddah, Saudi Arabia; and Tashkent, Uzbekistan, respectively. UTair subsequently operated some of the same aircraft on domestic flights between Moscow, Russia and Syktykar, Russia and Ukhta, Russia, respectively. Links to the TDOs are available here: 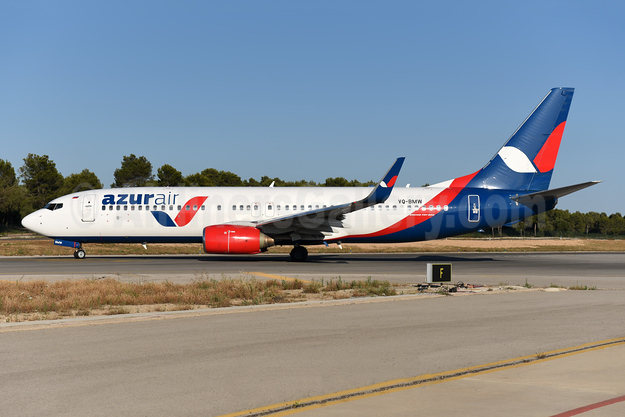 Azur Air is suspending all international flights on March 8.

Like other Russian airlines, it is concerned its leased aircraft will be seized by the owners.

Azur Air, according to Tass, may be forced to shut down on March 21, 2018 if it cannot correct open safety violations by Russian regulator Rosaviatsiya. The airline expects to resolve all issues before this deadline.

In connection with Rosaviatsiya’s announcement that the airline has limited use of its  operator’s certificate (AOC) until March 20, AZUR air informs that it does not see any difficulties in eliminating the inconsistencies and shortcomings revealed by the regulator as a result of the air carrier’s activity verification.

The airline also informs that in the shortest time, an application will be prepared and submitted to Rosaviatsiya for the removal of the limitations of the validity period of the operator’s certificate with the attachment of all necessary documents evidencing the elimination of comments.

To date, the company is a stable company in terms of financial and economic status, the leader in punctual performance of charter flights, the leading charter carrier of the country.