Cathay Pacific Airways made this announcement:

Cathay Pacific Cargo has built on its many years of experience in transporting pharmaceutical shipments to develop a vaccine solution specifically for the fast and effective distribution of COVID-19 vaccines across the globe.

Cathay Pacific Director Cargo Tom Owen said: “With our 20 dedicated freighters and cargo bellies of passenger aircraft supporting our extensive freighter network, we stand ready to assist with what will be the biggest humanitarian response to a situation involving civil aviation that anyone has ever seen.”

Cathay Pacific Cargo is progressively rolling out Ultra Track as a key part of the vaccine solution. The next-generation track-and-trace system monitors information including temperature, GPS location, and humidity, using low-energy Bluetooth readers. This gives shippers and forwarders near real time visibility, and ensures vaccines will remain within their transportation temperature ranges.

In addition, shipments using Ultra Track will also be monitored by the newly established Operations Control Centre. Based in Hong Kong, and staffed by dedicated cargo professionals 24/7, the team can instruct ramp and cargo terminal staff to take proactive steps to ensure the various storage requirements of vaccines are maintained.

Owen said: “Ultra Track will allow forwarders to monitor the condition of their vaccine shipments in near real time. It will be progressively rolled out through the first quarter of this year, and we will be offering the service free of charge for any COVID-19 vaccine shipments.”

The combined approach follows on from an airport-wide recertification of IATA’s CEIV Pharma accreditation (the internationally recognized quality-assurance scheme for pharmaceutical shipments) at Hong Kong International Airport. Cathay Pacific Cargo, the Cathay Pacific Cargo Terminal managed by Cathay Pacific Services Limited (CPSL) and ground-handling subsidiary Hong Kong Airport Services (HAS) have all been re-certified, offering a complete level of quality assurance at every stage of the import and tran-shipment journey.

The Cathay Pacific Cargo Terminal is being expanded to offer more temperature controlled capacity. While it is currently able to temporarily hold and transit 6.6 million doses of vaccine a day, there is more to come. Cathay Pacific Cargo’s Owen says: “We have just expanded so that it can handle more than seven million doses, and there will be more cold storage coming online soon. This new cold room storage will be able to handle a further 1.6 million doses.”

“With the vaccine being so valuable and in such limited supply, it’s critical that we get it right at every stage of the journey. We are confident about meeting the challenge, and we stand ready to play our part.”

During the COVID-19 pandemic, Cathay Pacific Cargo has been operating a full freighter schedule using its fleet of 14 Boeing 747-8F freighters and six 747-400ERFs (Extended Range Freighter). It has also operated thousands of pairs of cargo-only passenger flights, some with cargo loaded in the passenger cabins, and chartered hundreds of pairs of flights from its all-cargo subsidiary Air Hong Kong to add additional air freight capacity. 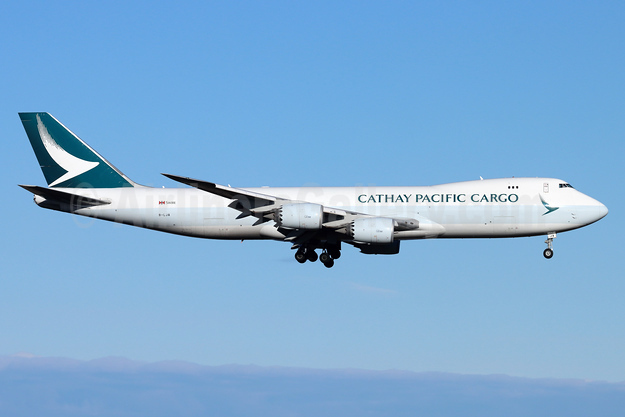 The airline issued this first half report:

The Cathay Pacific Group reported an attributable profit of HK $347 million (all amounts in Hong Kong dollars) for the first six months of 2014. This compares to a profit of HK $24 million in the first half of 2013. Earnings per share were HK 8.8 cents compared to earnings per share of HK 0.6 cents for the corresponding period in the previous year. Turnover for the period rose by 4.6% to HK $50,840 million.

A number of factors had a significant negative impact on the Group’s business in the first six months of 2014. The principal adverse factors were reduced passenger yield, continued weakness and over-capacity in the air cargo market, the continued high fuel price and a weak performance from an associated company, Air China.

Fuel remains the Group’s most significant cost. In the first half of 2014 fuel costs increased by 5.2% compared to the same period in 2013. Fuel accounted for 37.9% of total operating costs, which represents a 0.9 percentage point decrease compared with the corresponding period in 2013. In the first half of 2014, hedging activities resulted in a gain of HK $1,024 million. A significant amount of this gain is unrealised. Cathay Pacific continues to increase fuel efficiency by modernising its fleet. It is also focused on controlling costs.

The Group’s passenger revenue in the first six months of 2014 increased by 4.4% to HK $36,520 million compared to the same period in 2013. Capacity increased by 5.3% as a result of the introduction of new routes (to Doha and Newark) and increased frequencies on existing long-haul routes. The load factor increased by 2.3 percentage points to 83.6%, but the increase in passenger numbers was at the expense of yield, which fell by 3.5% to HK 66.6 cents. Passenger demand was strong in all classes of travel on long-haul routes. Demand on regional routes was generally robust, although strong competition put downward pressure on yield and demand was weak on certain Southeast Asian routes.

The Group’s cargo revenue for the first half of 2014 was HK $11,663 million, a rise of 3.4% compared to the same period in the previous year. Yield for Cathay Pacific and Dragonair decreased by 6.9% to HK $2.17. Capacity increased by 10.8%, while the load factor rose by 0.8 percentage points to 63.2%. Over-capacity in the industry remains a major concern and has made it difficult to increase rates. The airlines continued to manage capacity in line with demand in the first half of 2014. More cargo was carried in the bellies of passenger aircraft, reflecting increased use of Boeing 777-300 ER aircraft. Its new cargo terminal in Hong Kong is operating smoothly and now provides services for airlines outside the Cathay Pacific Group.

The Cathay Pacific Group continues to modernize its fleet. In the first six months of 2014 it took delivery of five new aircraft: two Boeing 777-300 ERs, two Airbus A330-300s, and (for Dragonair) one Airbus A321-200. Two Boeing 747-400 passenger aircraft were retired during the period. As part of agreements entered into with The Boeing Company in 2013 the airline is selling its six Boeing 747-400F freighters back to The Boeing Company. Four of these freighters are now parked and all six will have left the fleet by 2016. In the first half of 2014, we planned the accelerated retirement of 11 Airbus A340-300 aircraft. Four of these aircraft will be retired by the end of 2015 and the remaining seven will be retired by the end of 2017. At June 30, 2014 it had 90 aircraft on order for delivery by 2024. In the second half of 2014, Cathay Pacific and Dragonair will take delivery of 11 new aircraft. Two of them were delivered in July and two of them were scheduled to be delivered in August. Four Boeing 747-400 passenger aircraft will be retired, two of them were retired in August.

Cathay Pacific introduced passenger services to Doha and Newark in March and has announced the introduction of services to Manchester and Zurich from December 2014 and March 2015 respectively. Flights were added on the Chicago, Los Angeles and Osaka routes. The airline stopped flying to Abu Dhabi, Karachi and Jeddah but improved its schedules on other Middle Eastern routes. Dragonair started flying to Denpasar-Bali and Penang and increased services on a number of other routes. For cargo, Cathay Pacific tagged Mexico City onto its Guadalajara cargo service and increased it from two to three flights per week. It began flying freighters to Columbus in the United States in March. It will add Calgary in Canada to the network in October.

The Group (which accounts for its share of Air China’s results three months in arrear) recorded a loss from Air China in the first half of 2014. Air China’s results were adversely affected by a difficult operating environment and substantial foreign exchange losses caused by the depreciation of the Renminbi. In June, Cathay Pacific announced a substantial injection of capital and loans into Air China Cargo by its shareholders. This injection is to provide funds to assist the carrier to renew its fleet and improve the performance of its main cargo business.

Cathay Pacific Chairman John Slosar said: “The operating environment for the Cathay Pacific Group – and the aviation industry as a whole – remains challenging. We face significant competition in our passenger business. This makes it difficult to maintain yields. The air cargo business remains problematic because of excess capacity. Intense competition similarly puts pressure on yield. On the plus side, we continue to strengthen our passenger network and the connections available through Hong Kong. The high quality of our products and services increases our attractiveness to passengers. We expect our new freighter fleet and new cargo terminal to allow us to compete successfully in the air cargo market in the long term.

We expect business to be better in the second half of 2014. Our financial position remains strong and will enable us, despite the current difficult trading conditions, to maintain the quality of our products and services and to continue with our long-term strategic investment in the business. As always, we remain committed to strengthening the world class aviation hub in our home, Hong Kong. Finally, we are particularly pleased that in July, Cathay Pacific was named the World’s Best Airline in the annual World Airline Awards run by Skytrax. This is the fourth time we have received this award, which is decided by public voting.”

Copyright Photo: Antony J. Best/AirlinersGallery.com. As the report indicates, Cathay Pacific is accelerating the retirement of its older Boeing 747-400F freighters and the pictured Airbus A340-300s. In the first half of 2014, Cathay Pacific accelerated retirement of its 11 Airbus A340-300 aircraft. Four of these aircraft will be retired by the end of 2015 and the remaining seven will be retired by the end of 2017. Airbus A340-313 B-HXL (man 381) completes its final approach to London (Heathrow).

The engine is the first of the package’s three improvements to enter service. The two other components, Flight Management Computer (FMC) software upgrades and reactivation of the horizontal tank fuel system on the 747-8 Intercontinental, are expected to enter service later this month and in early 2014, respectively.

The PIP engine improves the airplane’s efficiency by 1.8 percent. “With this improvement, 747-8 customers will use roughly 30 less semi-sized trucks of fuel per airplane per year,” said Bruce Dickinson, 747-8 chief project engineer and vice president.

All three PIP components can be retrofitted on the 747-8. The tail fuel reactivation is applicable only for the 747-8 Intercontinental and the FMC upgrades can also be made to 747-400s.

Cathay Pacific Airways (Hong Kong) on November 17, 2011 staged a special ceremony to mark the completion of the civil construction of the new Cathay Pacific Cargo Terminal at Hong Kong International Airport. The event was hosted by the airline’s Chief Executive, John Slosar, with The Honorable Donald Tsang, Chief Executive of the Hong Kong Special Administrative Region, as guest of honor.

The airline used the event to unveil its latest aircraft, a new Boeing 747-867F Freighter registered as B-LJA (msn 39238). B-LJA is also painted in a unique livery and carrying a special name, “Hong Kong Trader”, in recognition of the city’s position as one of the world’s most important trading hubs.

B-LJA is pictured at Paine Field near Everett prior to the official hand over on November 15, 2011. The first flight was 10 days earlier.