AeroSur (Santa Cruz), struggling with mounting debts and unpaid employees threatening legal action, received another batch of bad news and has shut down all operations. American investor William Perry has declined to invest in the struggling carrier. The last flight was a domestic flight operated on May 17.

The unions are meeting today in Bolivia to consider taking criminal and legal action against the owners of AeroSur according to this report by La Razon.

AeroSur (Santa Cruz) is down to one aircraft and one domestic route as the struggling near-bankrupt Bolivian carrier talks to William Petty of Colorado and Franklin Mining. Mr. Petty is not interested in assuming the debts of the airline according to the Associated Press and this article by The Washington Post.

Meanwhile unpaid employees are going on a hunger strike to protest the lack of pay in Bolivia.

The Bolivian airline managed to resume a limited schedule with at least two Boeing 737-300s on April 6. Per the Amadeus schedule listings, the carrier has reduced its schedule by at least 52 percent from the previous pre-bankruptcy schedule. In addition, the airline has been canceling scheduled flights which has been reported by the media as it attempts to reorganize.

However the airline faces a daunting task. On April 24 IATA canceled the AeroSur code which now prevents travel agents and other IATA airlines from purchasing tickets on the airline. The airline can only sell tickets in its offices. However recent media reports in Bolivia indicate most AeroSur offices are now closed so the status of the airline is minute to minute. The airline is also threatening to lay off 1,200 employees in Bolivia.

Read the full report (in Spanish) from Expreso: CLICK HERE

Top Copyright Photo: Marcelo F. De Biasi. The shark (Sharko) is gone. The airline will be missed with its unique wildlife motifs.

Bottom Copyright Photo: Christian Volpati. Torisimo (the Bull) has already gone to Manchester for repainting for another customer.

AeroSur (Bolivia) (Santa Cruz) is planning to operate its own Boeing 767-200 on the Miami route effective June 20. This time the airliner will be painted in a “Tiburon” (shark) color scheme. 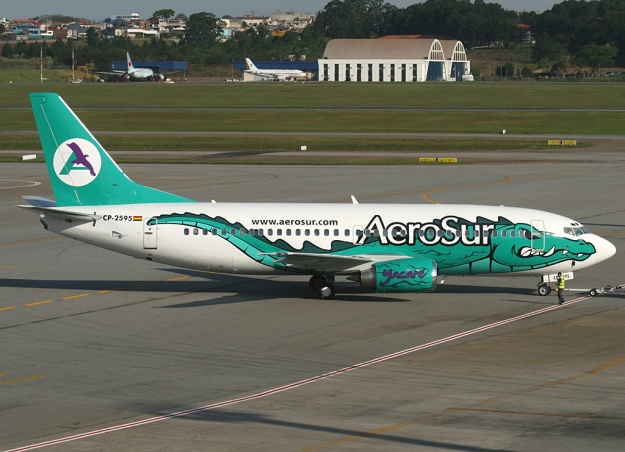 AeroSur (Bolivia) (Santa Cruz) added its first Boeing 737-300 in August in a dramatic way. The new type is painted in this special “Yacare” (alligator) color scheme and was introduced on September 3.