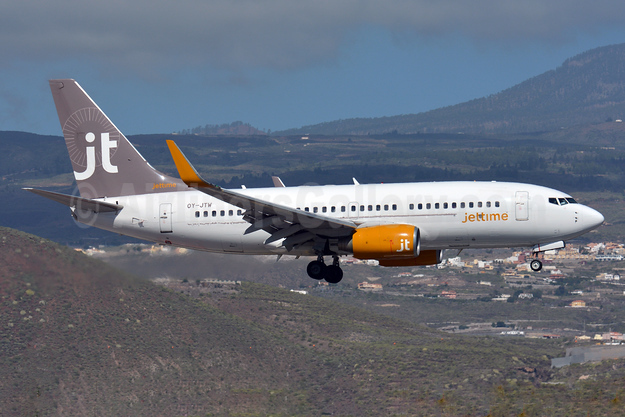 Jettime will be operating its Boeing 737-700s for SAS on routes out of Copenhagen. According to Airline Route, the sub-service will be operated from April 15 to May 12, 2018 on the following routes:

Jettime (Copenhagen) on October 18 took delivery of the first of six new ATR 72-600 turboprops. ATR 72-212A (ATR 72-600) OY-JZA (msn 1110) was acquired on lease from the Danish leasing company Nordic Aviation Capital (NAC). All the ATR 72-600 aircraft will be assigned to feed the Scandinavian Airlines (SAS) route network as part of a commercial arrangement between SAS and Jettime. All of the aircraft will be painted in SAS livery. The delivery ceremony for this very first ATR 72-600 series aircraft to be operated in Europe’s Nordic countries took place in Toulouse, France, in the presence of the management teams of Jettime, NAC, SAS and ATR. Deliveries of the next five ATR 72-600s will be completed by early 2014.

The four new ATR72-600s can each accommodate 72 passengers, and will be used on routes to and from Copenhagen and Stockholm in SAS’s winter timetable 2013-14 and summer timetable 2014.

At the same time, SAS is continuing its wet lease arrangements with Cimber and Braathens Regional.