Lynx Air (Lynx) has announced its arrival as Canada’s newest ultra-affordable airline, on a mission to make Canadian air travel accessible to all, with low fares, a fleet of brand-new Boeing 737 aircraft and great customer service.

Lynx will adopt the ultra low-cost carrier model, which has revolutionized air travel across Europe and the United States, offering low fares, flexibility and choice. The airline has selected Calgary as its headquarters and plans to announce routes and schedules soon.

“We are excited to bring competition and choice to the Canadian aviation market at a time when Canadians are yearning for the opportunity to fly again, whether it be to see friends and family or to take a long-awaited holiday,” McArthur said. “We have created an ultra-affordable fare structure which is focused on simplicity, transparency and choice. Our à la carte pricing will empower passengers to pick and pay for the services they want, so they can save money on the trip and spend where it counts – at their destination.”

Lynx will operate a fleet of Boeing’s newest 737 aircraft, featuring leading-edge fuel-efficient technology. The airline has firm orders and lease agreements in place for a total of 46 aircraft over the next seven years to meet anticipated demand. The first three Boeing 737s will arrive in early 2022.

Congratulations, @Lynx_Air, Canada’s newest airline. Thank you for launching with an all-737 fleet. Welcome to the Boeing family!

Lynx Air (Lynx), formerly Enerjet, is Canada’s newest ultra-affordable airline. Headquartered in Calgary, Lynx is on a mission to make air travel accessible to all, with low fares, a fleet of brand-new Boeing 737 aircraft and great customer service.

Lynx is a privately owned Canadian airline with the financial backing and industry expertise required to transform the Canadian aviation landscape.

Enerjet, which has Boeing 737 MAXs on order, will be introducing a new livery featuring a colorful geometric tail design (above).  There is a fully painted MAX at Boeing Field (BFI) (first) and at Renton (third).  Their second aircraft, msn 44314, ln 7882,  arrived at BFI on January 21, unpainted with an unusual temporary registration of N240BE.

Enerjet is a licensed Canadian charter airline based in Calgary that commenced operations with Boeing 737 Next Generation aircraft in November, 2008. 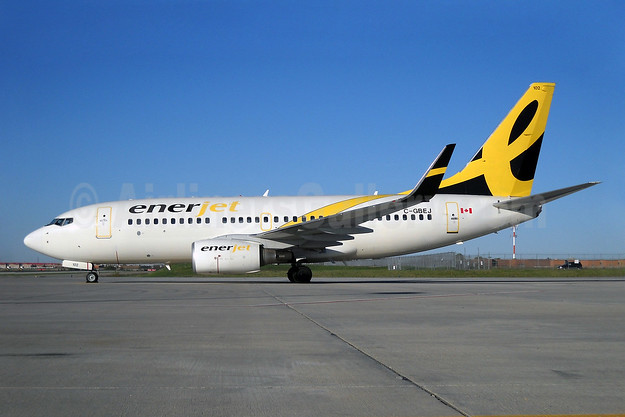 An investor group led by Tim Morgan, has announced that it will launch a Canadian ultra-low-cost-carrier (ULCC) service in 2019, bringing affordable, low-cost air travel to millions of Canadians by this time next year.

Backed by significant financial commitments from a consortium of Canadian investors and Indigo Partners, LLC, a leading private equity firm specializing in the aviation industry, Enerjet, a licensed Canadian carrier, will be rebranded, expanded and transformed into an affordable air-travel choice for Canadian travelers. This Canadian ULCC will offer a simple, ultra-low-cost fare structure and an extensive network of destinations across Canada and into the US. Terms of the transaction, which closed today, were not disclosed.

As a co-founder, former director and former chief operating officer at WestJet, Canada’s second-largest airline, Mr. Morgan has deep expertise and experience in the Canadian aviation market and is well-respected by aviation professionals, industry partners, and regulators.

About Enerjet
Enerjet is a licensed Canadian charter airline based in Calgary that commenced operations with Boeing 737 Next Generation aircraft in November of 2008.

About the Investor Group
The investor group is led by a consortium of established Canadian investors. In addition to Tim Morgan, the consortium includes TorQuest Partners, one of Canada’s leading mid-market private equity firms, Claridge Inc. and Stephenson Management Inc.

Enerjet (Calgary) has leased its first Boeing 737-800 from Transavia Airlines.

Read the full report in NewsPress:

Transavia Airlines (Transavia.com) (Amsterdam) has leased Boeing 737-7BD C-GOEJ (msn 33920) from Enerjet (Calgary) as PH-OEJ for the summer season. The airliner was leased on April 27.