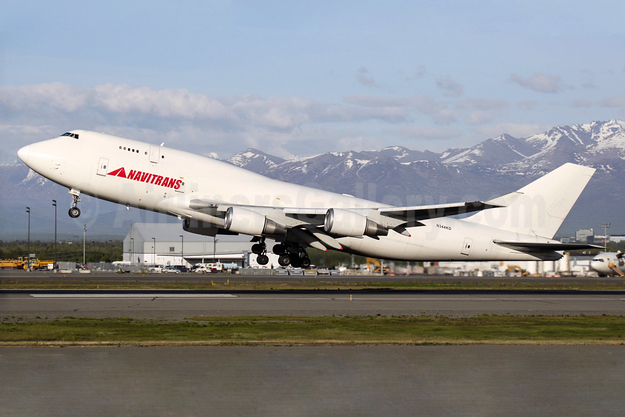 Western Global Airlines has made this announcement:

Western Global Airlines is pleased to announce that it has entered into a three-year agreement with Flexport to provide dedicated 747-400 freighter scheduled service between Hong Kong and Los Angeles beginning on April 5, 2018.

Western Global’s CEO and Founder, Jim Neff stated: “Our partnership with Flexport is a significant milestone because it will enable our two companies to join forces to revolutionize the traditional air cargo platform for the 21st century. Both Flexport and WGA were founded in 2013, and both have taken customer-focused approaches based on new technology. They have grown rapidly to become leaders and innovators in their respective business segments, and as such are natural partners in changing the air freight dynamic together. I believe that WGA’s responsive and robust service will allow Flexport to strongly serve their customer base both in Asia and the US.”

The initial service starting in April will be roundtrip twice per week between Hong Kong and Los Angeles growing to three times per week in September.

Based in Florida, minutes from the Southwest Florida International Airport, Western Global is a FAA Certified 121 all cargo airline operating its owned fleet of Boeing 747-400F and McDonnell Douglas MD-11F freighter airplanes worldwide for many of the top airlines, express companies, logistics providers, humanitarian and relief organizations, and the US DOD.  In less than four years of operations, Western Global has flown to 315 airports, in 115 countries on six continents. 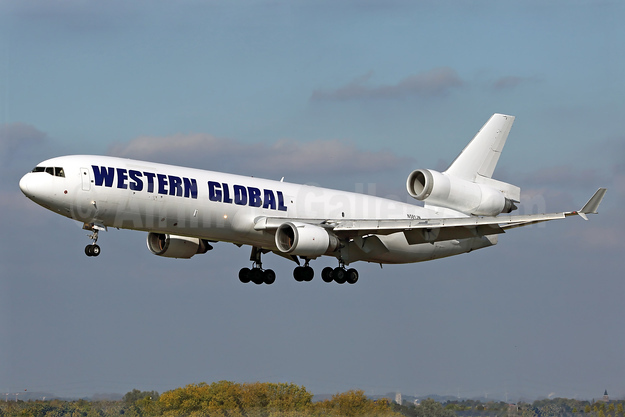 Western Global Airlines has been granted Department of Transportation (DOT) approval to operate to any country with an existing open skies agreement.

The charter airline is planning to start scheduled cargo flights to China.

Western Global has a fleet of McDonnell Douglas MD-11F and Boeing 747-400F freighters.

The new carrier, which began operations on August 4, 2014, will serve the major cargo centers of South America, including Colombia. Colombia is MIA’s top international trade partner by weight, with 241,000 tons of goods valued at $7.1 billion moving between the two markets in 2013, headlined by cut flowers. Those strong numbers directly contribute to MIA’s standing as America’s #1 airport for international freight, and the addition of WGA will further strengthen the Gateway of the Americas’ top ranking.

Western Global Airlines’ founder and CEO Jim Neff, who previously founded and owned Southern Air Inc. before selling it in 2007, said, “The driving force behind WGA is to offer the marketplace a new, large-scale, customer-oriented wet lease and charter platform focused on low cost, flexible service, and high reliability. We are pleased to build on our extensive resources and experience to support the Miami-South America air trade as it continues to reach record levels.”

The MD-11Fs are painted white but do not carry any titles.

Western Global Airlines-WGA (Sarasota/Bradenton) according to ch-aviation, will begin cargo operations with a fleet of two McDonnell Douglas MD-11 freighters (N415JN, msn 48415 and N435KD, msn 48435). Both freighters will be leased from Neff Air. The company has issued this statement:

Western Global Airlines LLC (WGA), a low cost, high quality all-cargo carrier, announced on August 4 that it received final FAA certification and has been issued a Part 121 Air Operator Certificate. In addition, WGA has been certified by the U.S. DOT to be fit, willing, and able to engage in interstate and foreign air transportation of property and mail. WGA plans to commence operations immediately.

Founder and CEO, Jim Neff, said, “We are very pleased by these approvals. As the first newly certified U.S. based wide-body air cargo operator in almost a decade, WGA is poised to offer the global marketplace a new large-scale, customer-oriented platform, focused on low cost, flexible service and high reliability. We also expect to benefit from the relative shortage of wide-body cargo carriers in the market today.” In addition to being WGA’s CEO, Mr. Neff also serves as CEO and Chairman of Helsinki based Nordic Global Airlines, Ltd. (NGA) and has had an unparalleled career in air cargo and aviation dating back to Flying Tiger Line, Continental Airlines, Emery Worldwide and Burlington Air Express. He was the founder and CEO of Southern Air Inc. from 1999 until 2010.

Mr. Neff added, “For me, this is the culmination of a lifelong dream. Having created and built the air systems for many of the leading U.S. based cargo operators over the past 30 plus years, I believe that the current global economic reality calls for freighter services to be both lower cost and more responsive to customers. This is the driving force and the vision behind WGA.”

WGA’s management team was hand-picked by Mr. Neff from among the industry’s most knowledgeable and experienced innovators. The company will begin operations with a fleet of MD-11Fs leased from Neff Air LLC, an affiliated leasing company which owns ten GE powered MD-11Fs and two GE powered 747-400BCFs directly without debt. WGA’s business plan is based on enabling its customers to profitably grow their air cargo business by seamlessly outsourcing all or part of their freighter operation to WGA. WGA’s sister company, NGA, has been providing low cost, flexible, and reliable service to the European market for the past three years with a fleet of four MD-11Fs leased from Neff Air. Going forward, the company expects to develop the WGA/NGA platforms jointly to achieve marketing and operational synergies to maximize service responsiveness, flexibility, and operating efficiencies.