Carpatair (Timisoara, Romania) filed for the opening of insolvency proceedings on January 20 according to Daily Business.ro. The airline hopes the bankruptcy court-appointed trustees will allow the carrier to continue operations. The carrier reportedly has debts of over £75 million.  Carpatair reportedly is unable to pay its creditors including NAFA, BRD, Agroind Bank of Moldova, and Agerpress according to Realitatea.net.

The airline started operations in December 1999.

Carpatair (Timisoara) has publicly accused Timisoara Airport, Romania (its home airport) of giving unfair discounts to competitor Wizz Air according to this report by Romania-Insider.com.

Meanwhile the airline will reintroduce Chisinau – Milan (Bergamo) – Chisinau flights on July 16. The new flights will be operated three times a week during the summer season, according to the following schedule: 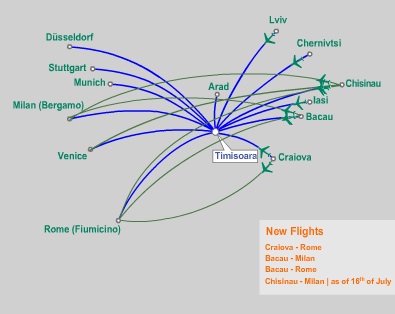 Carpatair (Timisoara) on May 23 introduced its first Boeing 737. The pictured Boeing 737-31S is now registered as YR-ADB (msn 29058) and was formerly operated by CCA – Czech Central Airlines as OK-CCA.

Carpatair (Timisoara) delayed by two months the introduction of new service between Chisinau and Bergamo (near Milan), Rome and Venice. The new routes were due to start on March 26.

“Carpatair announces a two months delay in launching the flights Chisinau – Venice, Rome and Milan (Bergamo). Because of the delay in signing the Common Aviation Area Agreement with the European Union, Carpatair announces a two months postponement in launching the direct flights from Chisinau to Venice, Rome and Milan. The European Commission announced some legal difficulties related to the mandate granted by the European Commission member countries to sign international agreements. These technical difficulties will be clarified shortly. All Carpatair passengers who have made reservations on these flights will be rerouted on the flight Chisinau-Timisoara.”

Carpatair (Timisoara) has announced the opening of a new base in Chisinau, Moldova in cooperation with Moldovian Airlines. Carpatair will provide nonstop flights to Venice, Rome (Fiumicino) and Bergamo (near Milan). Carpatair currently serves Italy from Chisinau via its hub in Timisoara.