Austral Lineas Aereas (subsidiary of Aerolineas Argentinas) (Buenos Aires) and Embraer have signed a contract for the sale of two Embraer ERJ 190 jets. The Argentine airline currently operates 20 airplanes of this model.

Like the aircraft that are already in operation, Austral’s new E190s are the Advanced Range (AR) model, which allows the airline to fly on any route inside Argentina and to reach such important capital cities of Brazil as Rio de Janeiro and Sao Paulo, nonstop. The jets are configured with 96 seats in a two-class layout—eight in executive and 88 in economy—with a modern onboard entertainment system equipped with individual monitors.

LV-WFN performed its final flight between Córdoba to Morón Air Force Base in Buenos Aires (MOR) on February 26. The aircraft was donated by Austral Líneas Aéreas to Museo Nacional de Aeronáutica, as it was the first of the DC-9 Super 80 airliner to enter service with Austral in 1981. This plane was retired from service on March 2012 and was preserved waiting for a decision about its fate. Lately the aircraft was being readied before being ferried to Morón as AU 2080, unpressurized and with landing gear deployed.

Copyright Photo: Alvaro Romero. LV-WFN looks forlorn at Córdoba while waiting for its final fate. Now it will be preserved. 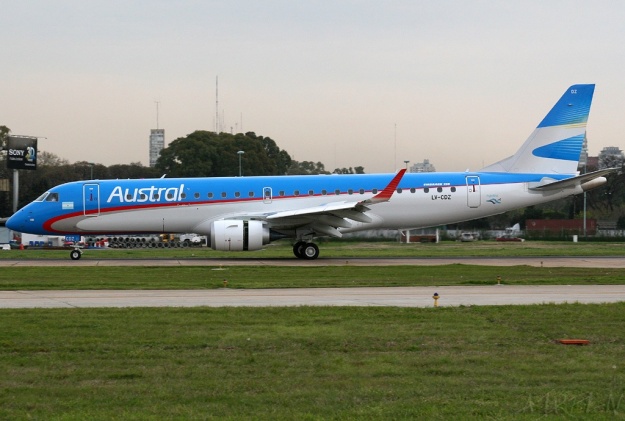 Austral Lineas Aereas (Austral Argentina) (Buenos Aires) has finalized its order for 20 Embraer ERJ 190 jets. This agreement was previously announced in May 2009, and was conditioned on fulfilling several requirements, which were finalized. From the 20 jets on order, three were already included in the firm order backlog of the first quarter of 2010, as “Undisclosed”.

The ERJ 190 jets ordered by the Argentine airline are of the Advanced Range (AR) model, and can fly nonstop for 2,400 nautical miles (4,400 km). The passenger cabin configuration, with four seats per row, will have a total of 96 seats divided into two classes: eight in the executive and 88 in the economy. All passengers will have a modern inflight entertainment system with individual monitors.