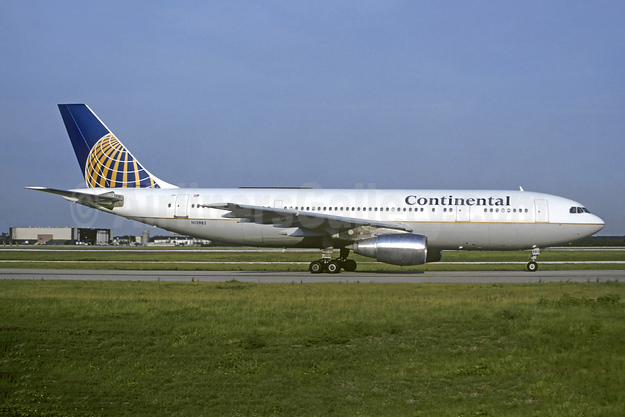 Top Copyright Photo: Bruce Drum/AirlinersGallery.com. N62631 when it was with Continental Airlines.

“Our co-workers pulled together in the first quarter to significantly improve our operational performance and customer service despite challenging weather and high load factors, and I want to thank them for their hard work,” said Jeff Smisek, chairman, president and chief executive officer. “Although this was a difficult quarter financially, I’m very proud of our team.”

For the first quarter of 2013, total revenue was $8.7 billion, an increase of 1.4 percent year-over-year. First-quarter consolidated passenger revenue increased 0.7 percent to $7.6 billion, compared to the same period in 2012.

Mainline RPMs in the first quarter of 2013 decreased 1.6 percent on a mainline capacity decrease of 5.0 percent year-over-year, resulting in a first-quarter mainline load factor of 81.4 percent. Mainline yield for the first quarter of 2013 increased 1.3 percent compared to the same period in 2012. First-quarter 2013 mainline PRASM increased 5.0 percent year-over-year.

“We are encouraged by our unit revenue performance this quarter, and we are working hard to build on our overall revenue progress this year,” said Jim Compton, UAL’s vice chairman and chief revenue officer. “My co-workers’ continued focus on our operational performance and customer service directly contributed to our improved revenue results.”

Passenger revenue for the first quarter of 2013 and period-to-period comparisons of related statistics for UAL’s mainline and regional operations are as follows:

Consolidated and mainline CASM, excluding special charges and third-party business expense, increased 6.8 percent and 8.3 percent, respectively, in the first quarter of 2013 compared to the same period of 2012. First-quarter consolidated and mainline CASM, including special charges, increased 6.5 and 7.9 percent year-over-year, respectively.

In the first quarter, consolidated and mainline CASM, excluding special charges and third-party business expense and holding fuel rate and profit sharing constant, increased 7.2 percent and 8.6 percent, respectively, compared to the results for the same period in 2012.

“We are focused companywide on operating more efficiently. Moreover, we are building an infrastructure to achieve our return-on-invested-capital goals and generate long-term returns,” said John Rainey, UAL’s executive vice president and chief financial officer. “Our balance sheet is the healthiest it’s been in years, and that benefits everyone—co-workers, customers and investors.”

UAL ended the quarter with $6.4 billion in unrestricted liquidity, including $1.0 billion of undrawn commitments under its new revolving credit facility. During the first quarter, the company generated $393 million of operating cash flow and had gross capital expenditures and purchase deposits of $526 million. The company made debt and capital lease principal payments of $1.3 billion in the first quarter, including $1.0 billion of prepayments. The company’s return on invested capital for the 12 months ended March 31, 2013, was 8.0 percent, below the company’s goal of 10 percent.

Continental Airlines (Houston) was cleared yesterday (November 29) of any criminal responsibility in a French court for the Concorde crash in Paris in 2000 that killed 113 people. The ruling absolves a Continental mechanic of involuntary manslaughter according to this report by Reuters. The mechanic had fashioned a non-standard titanium strip that fell off a Continental McDonnell Douglas DC-10 aircraft that fell onto the runway just before the Air France (Paris) Concorde attempted its ill-fated takeoff. Air France flight AF 4590 was scheduled to fly from Charles de Gaulle International Airport near Paris, to John F. Kennedy International Airport in New York City on July 25, 2000. Aerospatiale-BAC Concorde 101 F-BTSC (msn 203) crashed into a hotel in Gonesse, France. All 100 passengers and the nine crew members on board died in the fiery crash.

Top Copyright Photo: Christian Volpati. Concorde 100 F-BTSC (msn 203) is pictured at Paris (CDG) in March 1976 in the original 1959 delivery color scheme. The airliner was originally leased by Air France from Aerospatiale on January 1, 1976 as the earlier model of the type. It was converted to a Concorde 101 in June 1980.

United Airlines‘ (Chicago) and Continental Airlines‘ (Houston) pilots may finally have an integration contract agreement that will allow the two groups to be merged. ALPA has issued the following statement:

The Master Executive Councils of the Continental and United pilots, represented by the Air Line Pilots Association International, have voted to accept a tentative agreement on a joint collective bargaining agreement reached with United Continental Holdings, Inc. The agreement now goes before the pilots for a ratification vote.

“With this step, we are closer to a new contract that will provide gains in compensation, work rules, job protections, and retirement and benefits for our pilots and their families. We will finally begin to see the benefits of the merger that were promised to us, and an end to the concessionary and bankruptcy-era contracts we have lived and worked under for more than a decade.

“This agreement represents years of determination and unity demonstrated by the pilots of both airlines during the two-and-a-half years of negotiations for a new contract following the merger announcement. Pilots from both United and Continental Airlines will now determine whether this agreement addresses their contributions to the success of the airline.

“This step is also good news for our passengers and United employees. Once there is pilot approval of a contract, the operations of the two airlines can finally begin to be integrated. We can begin to deliver on the promise of the world’s best airline.”

Integration of seniority lists for the two pilots groups will occur after ratification of the tentative agreement. The process is independent of airline management and involves negotiations between the two pilot groups. Absent an agreement, binding arbitration will be used to settle any remaining differences. The process follows a predefined timeline following contract ratification that was agreed upon by the two pilot groups shortly after the merger was announced.

United Airlines (Chicago) has announced that flight attendants from the Continental subsidiary, represented by the Association of Flight Attendants (AFA), ratified a new labor agreement.

The AFA represents more than 24,000 flight attendants at the company’s United and Continental subsidiaries.

United Airlines (Chicago) has announced the company has reached a tentative agreement with the Association of Flight Attendants (AFA) covering flight attendants from the company’s Continental Airlines subsidiary, almost three months ahead of the contract’s amendable date.

The agreement extends the current collective bargaining agreement for a term of 28 months beyond its September 1, 2012, amendable date. Flight attendants will vote on the agreement in the coming weeks.

Air Line Pilots Association (ALPA), representing the 12,000 pilots of Continental Airlines and United Airlines of United Continental Holdings (Chicago), has called for a strike vote by its members after failing to come to an agreement with management on a single contract for the pilots after two years of negotiations.

Management states it is making progress in the negotiations and any strike vote will not alter the negotiations. The opposite is likely, a call for a strike will probably result in a final settlement.

Reminder to those wanting to merge companies; make sure you have the labor contracts in order before any merger!

Copyright Photo: Nick Dean. Storm clouds ahead? Like US Airways, Continental Airlines and United Airlines are in reality still two separate airlines with two pilot contract groups even though the companies have “merged” under the United Continental Holdings name and the Continental brand with the United name.

Continental Airlines‘ (Houston) merger with United Airlines (Chicago) was billed as a “merger of equals.” In reality it was a takeover of United by Continental. Continental was the best and most well-run U.S. legacy carrier before the merger. The Continental name is gone but the brand continues with the “new United”. United’s CEO Glenn Tilton got his way – he found someone to take United off his hands. Today the new UA is plagued with problems. 1 and 1 does not always equal 2. The new United is not the old Continental with more aircraft and people. Efficiency and profitability have taken a hit.

Joe Brancatelli of Portfolio.com explores the headline question and other issues facing the new United in his “Worst. Airline. Ever. Again” article.