Alrosa Avia operated the last Tupolev Tu-154 civil revenue flight on October 28, 2020 with 140 passengers between Mirny and Novosibirsk in Siberia with RA-85757.

Alrosa is a Russian airline that operates regional flights in Yakutia, regular and charter flights in Russia, international Charter flights to CIS countries, Asia and Europe, cargo transportation and special aviation operations. It is based at Mirny and Moscow-Domodedovo airports.

In addition to regular and charter flights, the company also provides ground handling at such airports as Mirny, Polyarny, Aikhal, and Lensk. The airline was formed on the basis of the Mirninsky air enterprise (map), which was a structural division of Alrosa since January 1, 2013, it has been operating as an independent legal entity.

Video of the last departure:

After completing its final flight, the aircraft will be transferred to the Museum of Aviation History of Tolmachevo Airport, where it will join the previously decommissioned Tu-154M RA-85684, known as Izhma. 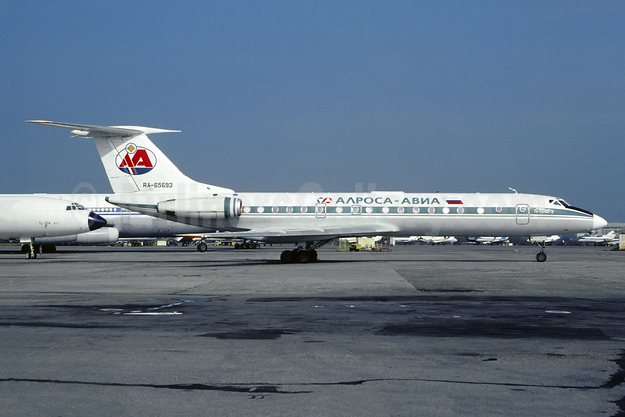 Alrosa Avia (Alrosa Air Company) (Alrosa Airlines) (Alrosa Mirny Air Enterprise) (Moscow-Zhukovsky) is planning to add this former Sky Airlines (Turkey) Boeing 737-800 on lease from GECAS. This will be a new type for the Russian charter airline. Currently the airline is operating Tupolev Tu-134s and it is also wet leasing a Boeing 737-76Q (VQ-BEO, msn 30293) from Yakutia Airlines in a different two-tone blue color scheme.

Alrosa Avia commenced operations in 1995. The group currently operates 10 aircraft types. In 2008, the fleet was expanded with the Tupolev Tu-134s and Tu-154s. The fleet now comprises 41 fixed wing aircraft and 29 helicopters.

Alrosa is also introducing this new “diamond” livery with this delivery.

Copyright Photo: Greenwing/AirlinersGallery.com. Boeing 737-83N N302TZ (msn 32576) was delivered new to ATA Airlines on June 29, 2001. It would later fly with Gol (PR-GIC), Transavia Airlines (PH-HST) and Sky Airlines (TC-SKR) before becoming the current M-ABFV. The airliner will be delivered from Dublin as EI-FCH.