ATR and Air Tahiti today announced the signature of a firm order for one ATR 72-600 and confirmed a deal for two ATR 42-600S – for ‘STOL’, Short Take-Off and Landing.

For over 65 years, Air Tahiti has been offering essential connectivity to the communities of French Polynesia.

Strong supporter of the ATR for more than 30 years, operating a fleet of 10 aircraft, it became the launch customer of the ATR 42-600S at the Paris Air Show in 2019.

These additional aircraft will enable the airline to offer higher frequencies, but also higher capacity, as the ATR 42-600s will enable access to destinations with short runways, like Maupiti, using 100% of the aircraft load capacity.

As part of the company’s birthday and the celebration of thirty years of partnership with the aeronautics manufacturer ATR, Air Tahiti unveiled two new liveries in October 2017, which are worn by its last two ATRs received in 2016 and 2017.

To cap off the celebration of its 60th birthday in February 2018, Air Tahiti renews the operation “Tatau” or “tattoo” on the last ATR 72 entered in the fleet, which is called “Tapuata” and received in November 2017 a baptism on the island of Rurutu, in the Austral archipelagos, where its name originally comes from.

This time, the influence of the archipelago is reflected in the motifs of dancers and suns, typical of the Austral islands, which are locally adorned with gold flakes alongside a huge and golden “60 years”. 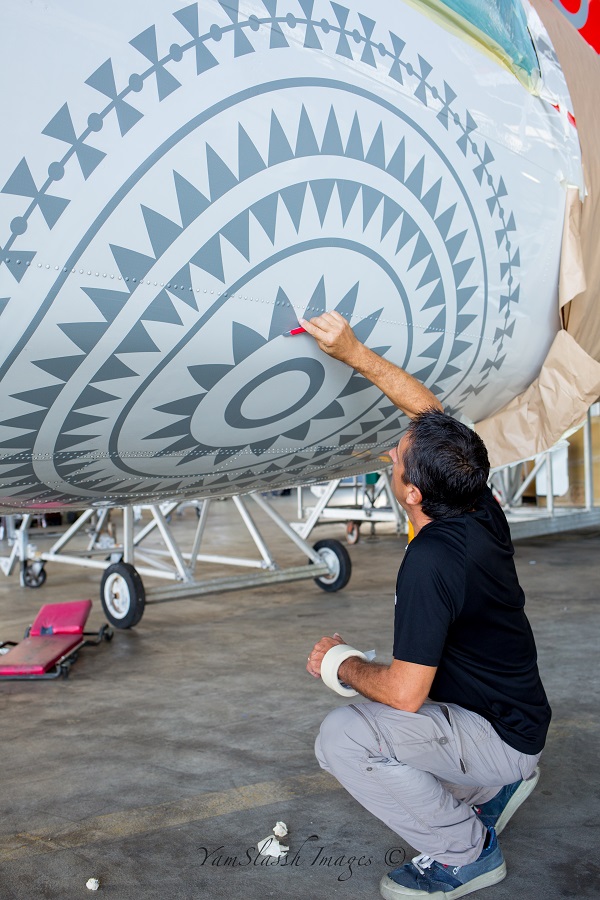 Inspired by ancestral Polynesian motifs that were designed by the students of the CMA (French Polynesia School of Fine Arts) these new liveries incarnate a stronger and more contemporary expression of the airline’s Polynesian identity.

Through the choice of these patterns, the company sought to illustrate the essential link “Te Natira’a” that it embodies between the populations, the islands and the different archipelagos; and materializes the bond that our staff weave each day with our travelers, by offering them a warm and authentic welcome in accordance with the welcoming traditions specific to the Polynesian culture. The most significant symbols represent characters that hold hands ; they also stage islands.

Collaboration with the CMA and the ADHETEC Company

The company also wants to reflect the connection that it embodies between past and present, between the generations of yesterday and today, through the work done by the young Polynesian students of the CMA (French Polynesia School of Fine Arts) on ultra modern airplanes, inspired by motifs created by their Tupuna, that is their ancestors…

The chosen symbols are spread over three ATR72-600s, but also in their cabin with a marking of the luggage compartments.

This work has been carried out with the help of the OXYGEN agency, whereas the production and placing of the stickers was done by ADHETEC, global leader in aircraft marking. 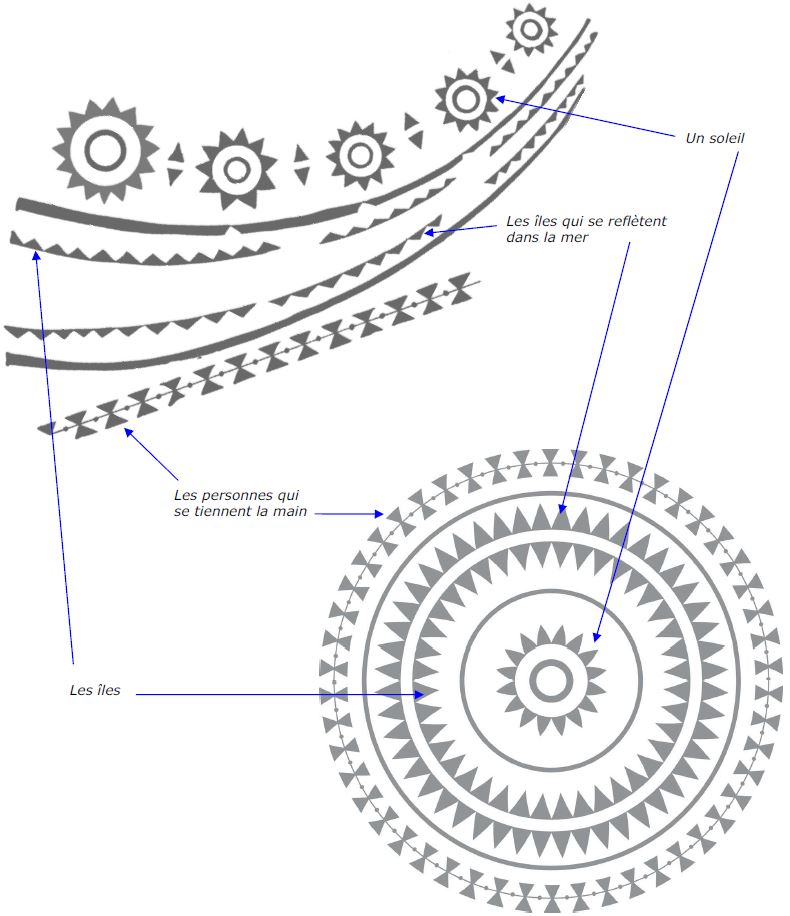 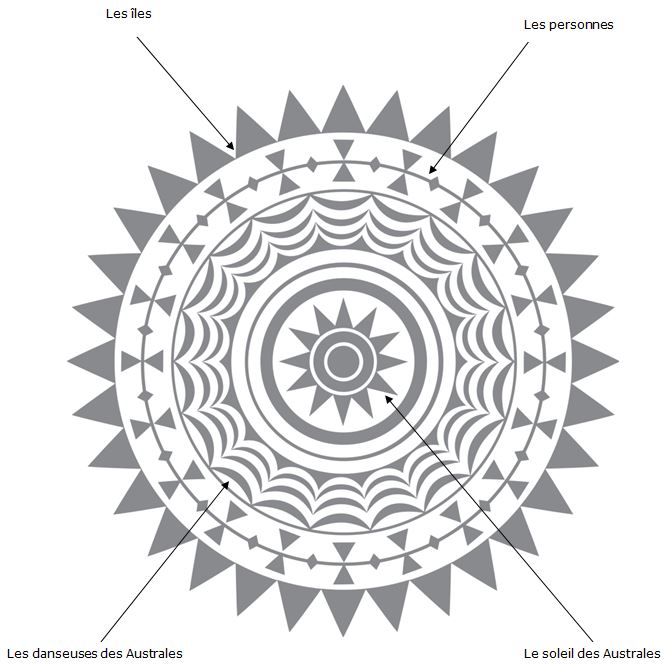 The early days of seaplanes

Far from the continents, Polynesia was excluded from air routes for a long time. It was not until the Second World War that aviation really took off, with the construction of the first airstrip, in 1943, in Bora Bora, by the US military. In the aftermath of the attack on Pearl Harbour, the Americans sought in this way to protect and supply the routes between the US coastline and the southwest Pacific.

The advent of a scheduled commercial air service between the islands came in 1950, when a handful of entrepreneurs founded Air Tahiti, first one of the name, which is unrelated to the current Air Tahiti. To begin with, flights were made in a seven-seater Grumman J-4F Widgeon seaplane. Its low capacity meant that the need for a second aircraft soon became apparent. In 1951, the French ministry for the overseas territories purchased a Grumman Mallard for the territory. Little by little, this company Air Tahiti spread its wings to cover all of the Polynesian islands. The first sea landing in the Gambier Islands was made on 25 June 1953. In October 1953, the first flight to the Marquesas and a sea landing in Taiohae/Nuku Hiva took place.

In July 1953, Transports Aériens Intercontinentaux (TAI), the commercial operator of the state-controlled inter-island air network, Régie Aérienne Interinsulaire (RAI), asserted its entitlement to the allocation of local transport services, under agreements signed with Air France. The territorial government withdrew Air Tahiti’s operating licence for the Mallards, in favour of the TAI, and with it, the Air Tahiti emblem disappeared. The RAI operated on behalf of the ministry of public works and transport. It purchased two Catalina seaplanes to expand the service linking the islands of French Polynesia. These orange-liveried aircraft received a registration number with the prefix F-OA, reserved for aircraft operated overseas.

Gradually, the network continued to expand. In 1955, the Austral Islands began to be served by seaplanes, with the opening up of the waters around Tubuai and Raivavae. In 1958, the state-controlled “Régie” became “Réseau” (network) Aérien Interinsulaire, and marks the real beginnings of our company.

The development of runways

Seaplanes may have seemed ideally suited to the island context, but in fact broad expanses of water free of obstacles and sheltered from the swell were hard to come by. It therefore soon became necessary to develop runways and aerodromes.

The opening of Tahiti Faa’a International Airport, in 1960, meant that Tahiti could now receive international commercial flights. Meanwhile, across the territory, an extensive runway-construction programme was launched by the French State. Four runways were built in the 1960s, and 27 in the following decade.

In 1970, the RAI became Air Polynésie, a subsidiary of UTA. Nicknamed “Air Po” by the Polynesians, the airline further asserted its Polynesian identity, putting in place scheduled flights throughout French Polynesia, in particular to the islands furthest away from Tahiti.

In 1986, the former UTA, which in the meantime had been taken over by Air France, sold its share in Air Polynésie to local investors. The sale gave rise, in 1987, to the birth of Air Tahiti, in its current form. The new airline was keen to modernise, and in 1987 acquired its first ATR 42, marking the start of a long-term partnership with aircraft manufacturer ATR.

Air Tahiti and ATR have confirmed the order for two ATR 42-600S, the new version of the ATR 42 offering enhanced take-off and landing capabilities on short runways. The world number one in the regional aviation market has started taking orders for this new aircraft, to be launched officially once approved by the company’s Board of Directors—a decision expected to be announced before the end of the year.

The ATR 42-600S is a STOL (Short Take-Off and Landing) version of the ATR 42-600 which has been enhanced to reduce the required take-off and landing distances, down from 1,050 metres at present to just 800 metres. Thanks to this upgrade, several hundred more airports will be accessible by ATR, offering airlines new commercial opportunities and providing local populations with better access to the global economy, health care, education and culture.

These new aircraft will be operated by the Polynesian airline on routes interconnecting the Marquesas Islands. They will allow an increase in the number of passengers carried to certain destinations in the archipelago, such as Ua Pou or Ua Huka, currently served only by smaller aircraft. The introduction of these new aircraft is also a response to the airline’s desire to continue to harmonise its regional fleet around ATRs, which Air Tahiti has been operating for over 30 years already.

All images by Air Tahiti.