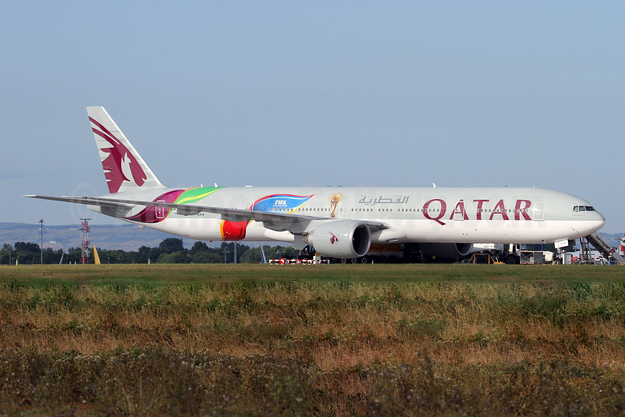 Kick-starting the final leg of the 2018 FIFA World Cup Russia, as we’ve unveiled a new FIFA livery freshly painted on one of our Boeing 777 aircraft. We are ready for take-off to the 2022 World Cup.

The airline also released this statement:

Qatar Airways, an Official Partner and the Official Airline of FIFA, has taken its celebration of the 2018 FIFA World Cup Russia to the skies with a specially-branded Boeing 777 aircraft painted in FIFA livery, ahead of the tournament’s Semi-Final and Final match.

The bespoke aircraft, which features distinctive FIFA branding, was hand-painted in Ireland and flown to Doha, where a press conference was held at Hamad International Airport before the aircraft flew to Moscow just in time for the tournament’s Semi-Final and Final matches.

Qatar Airways Group Chief Executive, His Excellency Mr. Akbar Al Baker, said: “We are tremendously excited to celebrate our passengers’ love for football by bringing this unique, one-of-a-kind aircraft to Moscow. As Official Partner and Official Airline of FIFA, we are proud to be able to unite football fans from around the world in Russia, helping them to experience the magic of the FIFA World Cup. This beautiful aircraft further cements our commitment to our important partnership with FIFA, as well as our loyalty to millions of football fans around the globe who have gathered in Russia to cheer their teams on.

“We look forward to celebrating in the upcoming days with fans, both in Russia and around the world.”

Engr. Badr Mohammed Al Meer, Chief Operating Officer at Hamad International Airport stated: “As we prepare for the 2022 FIFA World Cup Qatar, we are thrilled to witness our national carrier celebrate the 2018 FIFA World Cup Russia with this truly unique and spectacular aircraft. This moment encapsulates the spirit of the FIFA World Cup, celebrating football, art and culture on an international scale.”

Qatar Airways kicked off its celebration of the tournament by teaming up with singer and TV star Nicole Scherzinger for a re-recording of the classic song ‘Dancing in the Streets’, which resulted in an upbeat and infectiously fun-filled ‘musical’ style TV commercial. The song expresses the airline’s firm belief that sport is a universal language, which has the power to inspire and encourage people to follow their dreams, with the commercial having a global reach to date of 2.6 billion people.

In December 2017, Qatar Airways launched daily services to the cultural capital of Russia, St. Petersburg, doubling the number of Russian routes operated by the carrier. The addition of St. Petersburg to Qatar Airways’ route map demonstrates the importance of the Russian market to the carrier, which has been flying to Moscow since 2004. The award-winning airline currently operates three daily flights between Moscow and Doha, in addition to a daily flight between St. Petersburg and Doha.

In April, Qatar Airways signed an MoU with Moscow’s Vnukovo International Airport, Russia’s third-largest airport, committing to a potential acquisition of up to 25 per cent of the airport’s total shares, complementing the strong ties established with the country, and in support of the airline’s existing investment strategy. 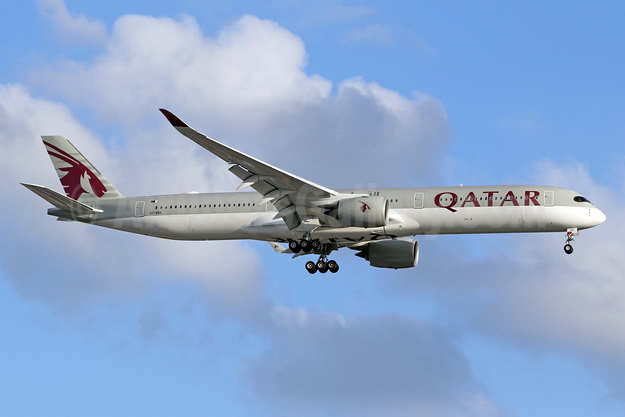 In other news, Qatar Airways has announced that the new Airbus A350-1000 (above) will be on display at this year’s Farnborough International Airshow, taking place from July 16-22 in Hampshire, United Kingdom.

The award-winning airline will showcase its ultra-modern Airbus A350-1000 and Boeing 777, both equipped with the award-winning, luxurious Qsuite Business Class seat. Unveiled last year, the patented Qsuite features the first-ever double bed in Business Class, as well as sliding panels that transform the space into a shared area customisable for groups of two, three, or four, allowing passengers to tailor their in-flight experience to meet their specific needs.

Qatar Airways will also display the Air Italy Boeing 737 Max 8 – the first aircraft to feature the recently rebranded airline’s striking new livery. The new Boeing 737 Max 8 aircraft offers modern and spacious cabins, superior operating economics as well as greater fuel efficiency. The aircraft was recently unveiled in Seattle and delivered to Milan on its inaugural flight, signaling a new era in aviation for the people of Italy.

Qatar Airways Group Chief Executive, His Excellency Mr. Akbar Al Baker, said: “Qatar Airways is delighted to be returning to this year’s Farnborough International Airshow. It has already been an incredible year for us, having been the Global Launch Customer for the Airbus A350-1000 in February. The six aircraft on display at Farnborough, including the A350-1000, the B777, and the Air Italy Boeing 737 Max 8, are the most technologically advanced aircraft in the skies today, and we look forward to welcoming visitors to Farnborough to experience them first hand.”

The airline’s cargo division will also publicly display one of its freighter aircraft for the first time at Farnborough International Airshow. The Boeing 747-8 freighter gives cargo operators the lowest operating costs and best economics of any large freighter airplane while providing enhanced environmental performance. It is optimised to provide greater revenue cargo-carrying capability than the Boeing 747-400, offering 16 per cent more cargo volume while keeping its unique nose door. The Boeing 747-8 freighter is also a popular choice of charter aircraft especially for oversized cargo. Qatar Airways Cargo is the world’s leading international cargo carrier, serving more than 60 exclusive freighter destinations worldwide, with many recent additions to its freighter network, including Pittsburgh, Phnom Penh and Yangon.

The fifth aircraft to be displayed at the airshow will be the Qatar Executive Gulfstream G500 jet. Qatar Executive, which provides VVIP charter on-demand-services to an elite clientele, continues to grow its global reach, serving worldwide destinations from New York to Shanghai. To support its ambitious expansion plans, Qatar Executive continues to increase the size of its fleet, and plans to take delivery of up to 25 additional aircraft between now and 2022, a combination of G500, G600 and G650ER jets.

The sixth and final aircraft to be displayed is the JetSuiteX Embraer 135 jet. The luxuriously reconfigured Embraer 135 offers 30 comfortable Business Class style seats, making it the ideal solution for group charters. In April 2018, Qatar Airways announced that it had taken a minority stake in JetSuite, Inc. and indirectly in JetSuiteX, Inc. JetSuiteX, the sibling company to JetSuite, offers semi-private air service on the U.S. West Coast and beyond. JetSuiteX fills a niche in underserved short-haul markets and small airports, and enjoys a Net Promoter Score over 90, higher than the major U.S. airlines. JetSuiteX operates its fleet of Embraer 135 aircraft from private terminals in California and Nevada, with no lines, no waiting and no stress, at a price competitive with commercial travel.

Qatar Airways recently launched direct services to both London Gatwick and Cardiff airports, strengthening Qatar Airways’ presence in the United Kingdom. Passengers in the United Kingdom can now choose from up to 95 flights per week, including six daily departures from London Heathrow, 16 weekly from London Gatwick and Manchester, and daily flights from Cardiff, Birmingham and Edinburgh.

Qatar Airways has revealed a host of upcoming new global destinations, including the announcement that it will be the first Gulf carrier to begin direct service to Luxembourg. Other exciting new destinations to be launched by the airline include Tallinn, Estonia; Valletta, Malta; Langkawi, Malaysia and Da Nang, Vietnam.