Hi Fly has unveiled its new paint scheme on its first Airbus A380. The carrier has brought the new type to Farnborough.

The A380 is painted in a two-sided scheme. 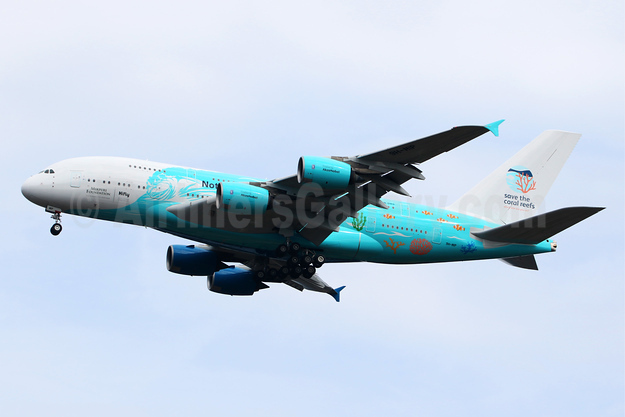 Hi Fly is supporting the Mirpuri Foundation campaign “Save the Coral Reefs” by painting one of its aircraft with a special-themed livery, aiming to reinforce worldwide the message of sustainability and protection of the seas. 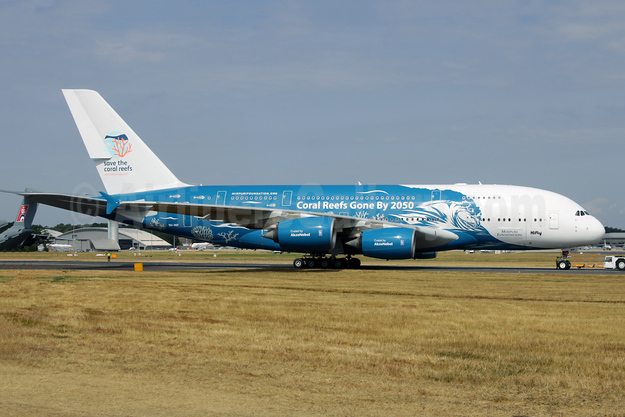 The airline joined the project in cooperation with Mirpuri Foundation, Hi Fly’s principal sustainability partner and AkzoNobel, that provided the coating to personalize the project. The chosen aircraft was an Airbus A380-800, the biggest commercial aircraft in the world, which is now painted on both sides, one side in dark blue displaying destroyed corals contrasting with a light blue side representing a pristine ocean with colorful and healthy marine life.

“A big cause requires a big answer and now, the biggest commercial aircraft on the planet will be the one carrying this big message around the globe”, says Paulo Mirpuri,President of both Hi Fly and Mirpuri Foundation.

With this initiative, Hi Fly is raising awareness for this unprecedented campaign to fight the destruction of coral reefs. If no action is taken, these beautiful ecosystems will disappear by 2050. With 50% of the world’s corals already gone, action needs to be taken immediately and awareness is the first step.

Hi Fly, a Portuguese company with an all-Airbus fleet has become the first operator of a second-hand A380. It’s a move that marks the beginning of a new era for the program and demonstrates Airbus’ continued commitment to the passenger favorite double-deck widebody airliner.

The A380 program is young – the first aircraft entered into service in October 2007 – and so when msn 006 came off lease after 10 years of airline operation, its lessor looked for support from Airbus in finding a new operator.

After discussions with the lessor and potential customers, a deal came together with Hi Fly, a specialist in ‘wet lease’ operations, also known in the aviation industry as ACMI (aircraft, crew, maintenance and insurance). The company will lease the aircraft and crew to airlines who, for example, need to replace a grounded aircraft or want additional short-term capacity to meet passenger demand.

Commenting on the aircraft’s delivery in July, Hi Fly President and CEO Paulo Mirpuri said: “We welcome the arrival of the Airbus A380 in our fleet and we are extremely happy with the market reaction so far on this new availability in our wet lease product offering.” He also praised the aircraft’s comfort and environmental performance.

All Other Photos: Hi Fly.