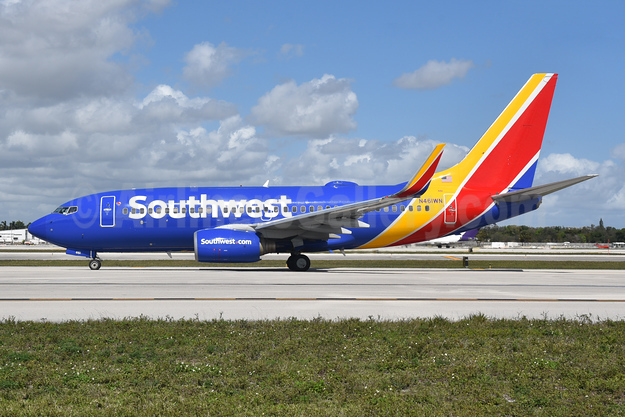 Gary C. Kelly, Chairman of the Board and Chief Executive Officer, stated, “Our first quarter 2019 net income was solid despite unexpected headwinds significantly impacting our performance. I am especially proud of our nearly 60,000 Employees for the commendable job under operationally difficult circumstances. Our People were tasked with minimizing disruptions for our Customers due to more than 10,000 flight cancellations arising from the grounding of the Boeing 737 MAX 8 aircraft (MAX), unscheduled maintenance disruptions in connection with efforts to reach a Tentative Agreement (TA) with the Aircraft Mechanics Fraternal Association (AMFA), and severe winter weather. We estimate the impact of these flight cancellations, combined with the impact of the U.S. government shutdown and softness in leisure revenue trends, reduced our first quarter 2019 net income by approximately $150 million. While our strong momentum coming into the year slowed, we drove record revenues, strong margins and cash flows, a healthy profitsharing accrual for our Employees, and significant returns for our Shareholders. All notable first quarter achievements, and testaments to our resilient brand and low-cost business model.

“Currently, the timeline is uncertain for the MAX aircraft return to service. In the meantime, we have proactively adjusted our published flight schedules for the next several months and removed all MAX flights through August 5th. Our goal is to stabilize and protect the integrity of our flight schedule, while providing dependability and reliability for Customers booking their summer travel. The MAX aircraft represents less than 5 percent of all daily flights, and the vast majority of our Customers’ itineraries have been unaffected by the MAX groundings. Following a rescission of the Federal Aviation Administration (FAA) order to ground the MAX, we will return the aircraft to service once we are confident that we are in compliance with all necessary FAA directives and all necessary Pilot training has been completed. Safety is our top priority, and that commitment will never be compromised.

“We were thrilled to launch service to Hawaii on March 17th, with an inaugural flight from Oakland to Honolulu on Oahu followed by an inaugural flight from Oakland to Kahului on Maui on April 7th. Bay Area Customers were excited finally to have access to Southwest’s low fares to Hawaii. The warm welcome we received from communities across Hawaii was tremendous. We are scheduled to begin service from San Jose to Honolulu on May 5th, and to Maui on May 26th. Our interisland service is scheduled to begin on April 28th, with service between Honolulu and Maui, and between Honolulu and Kona on the island of Hawaii on May 12th. More service is planned for the previously announced gateways of San Diego and Sacramento, and for Lihue on Kauai. We are very pleased with our Hawaii performance, thus far, and expect Hawaii to be the key expansion focus in 2019 and 2020.”

Based on current cost trends and flight schedule adjustments through August 5th, the Company now estimates annual 2019 CASM, excluding fuel and oil expense and profitsharing expense, to increase in the range of 5.5 to 6.5 percent, year-over-year, compared with 2018’s 8.53 cents, which excludes fuel and oil expense, profitsharing expense, and special items. This increase includes an estimated two-point year-over-year headwind due to lower annual 2019 capacity as a result of the MAX groundings, and an estimated one-half point year-over-year headwind due to incremental costs related to the TA with AMFA.

The Company continues to estimate its annual 2019 effective tax rate to be approximately 23.5 percent.

Liquidity and Capital Deployment
As of March 31, 2019, the Company had approximately $3.9 billion in cash and short-term investments, and a fully available unsecured revolving credit line of $1 billion. During first quarter 2019, Fitch Ratings upgraded the Company’s senior unsecured debt to “A-” with an outlook of “Stable.”

Effective as of January 1, 2019, the Company adopted Accounting Standards Update (“ASU”) No. 2016-02, Leases, codified in Accounting Standards Codification 842. All amounts for first quarter 2019 reflect the adoption of this ASU, while all periods prior to 2019 remain in accordance with prior accounting requirements. The most significant impact of the ASU was on the Company’s unaudited Condensed Consolidated Balance Sheet, through the addition of approximately $1.5 billion of Operating lease right-of-use assets and corresponding operating lease liabilities, in addition to the elimination of approximately $1.7 billion of Assets constructed for others and $1.6 billion of related Construction obligations. The impact to the Company’s unaudited Condensed Consolidated Statement of Income and the unaudited Condensed Consolidated Statement of Cash Flows was not material.

Based on aircraft commitments as of March 31, 2019, and assuming no prolonged grounding of the MAX aircraft that could impact the Company’s aircraft capital spending, the Company continues to estimate its 2019 capital expenditures to be in the range of $1.9 to $2.0 billion.

Fleet and Capacity
The Company ended first quarter 2019 with 753 aircraft in its fleet. This reflects the first quarter delivery of three leased 737 MAX 8 aircraft. All 34 of the Company’s 737 MAX 8 aircraft were grounded as of March 13, 2019, to comply with an FAA emergency order issued for all U.S. airlines to ground all 737 MAX aircraft. While the Company continues to expect to end 2019 with approximately 775 aircraft in its fleet based on the current aircraft delivery schedule and net of expected 737-700 retirements, prolonged grounding of the MAX aircraft could impact the Company’s delivery and retirement schedule.