The European Cockpit Association (ECA) has issued this statement:

This will be the second summer of industrial unrest in a row for Ryanair and the underlying root causes seem similar, and familiar to those of last year: Ryanair’s inability to undertake genuine social dialogue with its employees.

“One year was sufficient for Ryanair to acquire and develop two new airlines – Malta Air and Ryanair Sun in Poland – and to buy a 3rd one – Laudamotion in Austria,” says ECA Secretary General Philip von Schöppenthau. “But in all this time Ryanair has failed to negotiate long hoped-for Collective Labour Agreements (CLA) with its crew in several major countries. Improving relations with its employees clearly seems to have shifted to a lower place on the priority list.”

In the current highly sensitive context of social unrest, Ryanair seems to have opted again for its favorite approach: confrontation. The company issued warnings of job cuts, but few in the industry are convinced by the justification provided by the airline. The continually varying threats are reminiscent of last year’s, made after 100 Irish pilots walked out. However, with a future flying program larger than this year’s, even with the delayed arrival of ‘growth’ 737 MAX aircraft, and management continuing to recruit pilots, it is difficult to see these ever-changing warnings of a pilot surplus as genuine. 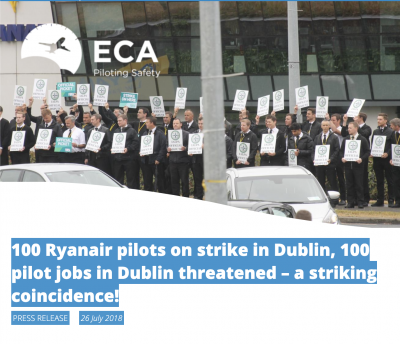 Ryanair announced cuts to 20% of its Dublin-based fleet this winter and possibly the dismissal of 100 pilots and 200 cabin crew in the weeks to come. This decision comes in the immediate aftermath of a series of one-day strikes by Irish based pilots and further industrial action across Europe.

“We are not surprised with this warning by Ryanair,” says ECA President Jon Horne. “The new threat also calls to mind the closure of the Eindhoven base – a retaliation measure against pilots and cabin crew on strike. This seems to be the only approach to industrial issues that the current management knows.”

Ryanair claims that their busy schedule with the different unions is a challenge, while unions from several countries repeatedly offered to meet jointly in order to discuss common elements of CLAs, and thereby to increase efficiency for the company. Instead, Ryanair chose a piecemeal approach and started a set of parallel negotiations with different unions – cabin crew and pilot unions – in various EU countries where the company operates. The outcome to date is that only 3 pilot unions in Europe (Italy, Belgium and Portugal) have signed more comprehensive CLAs, leaving thousands of Ryanair crew across Europe still without protections to terms, conditions and application of labour rights.

More than a year ago Ryanair pledged to implement local labour law, to negotiate meaningful CLAs for all its crew, and announced it would offer a possibility for self-employed / contractors to be directly employed. This pledge hasn’t been fulfilled yet.

“The Recognition Agreements with unions and the partial deals (e.g. on seniority) that Ryanair reached last summer were enough to buy the airline some time, but it has not been used to secure lasting industrial peace and a sustainable future for the airline. The ill-disguised threats to crew over the past weeks, regretfully, are yet another show of disregard for its employees and social dialogue. Has management really learnt nothing at all – or is it simply resistant to genuine change?”, asks Philip von Schöppenthau, ECA Secretary General.

“With the outlines of future opportunities for union busting and social dumping already visible in Malta Air and Ryanair Sun, it is not surprising pilots are standing up to ensure their agreements, labour rights, and previous pledges from the airline will be respected,” says ECA President Jon Horne.

ECA is the representative body of over 40,000 pilots from across Europe, striving for the highest levels of aviation safety and fostering social rights and quality employment for pilots in Europe.