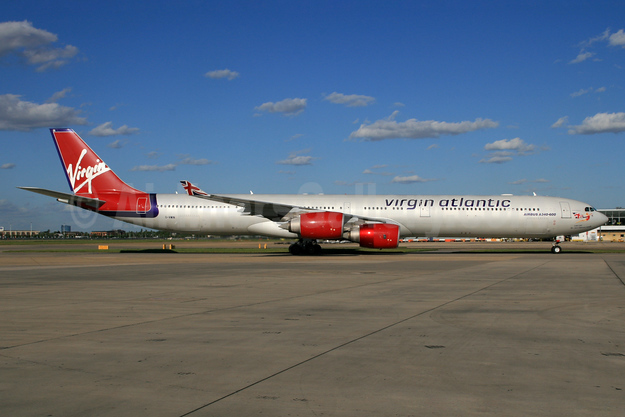 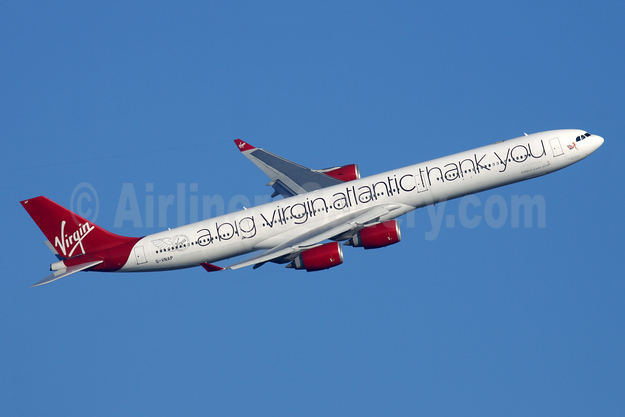 Virgin Atlantic release this tribute to the type:

At 15:04 on Tuesday 24 March, G-VWIN Lady Luck touched down on a positioning flight to Bournemouth airport. This marked something of a momentous occasion – as it would be the final Virgin Atlantic flight for our trusty workhorse, our Airbus A340-600.

We intended to retire our remaining A340s from the fleet early this year as part of our fleet transformation plan: The 787 joined our fleet between 2014-2018, A350 deliveries are now well underway, and the A330neo will join the fleet from late 2021 to complete the modernisation of our entire fleet over a ten-year period. The result will be one of the youngest fleets in the skies, halving our average aircraft age by 2024 to just 5.3 years and reducing our carbon emissions by 32 percent.

With the recent developments in our response to the global impact of Covid-19 it made sense to bring forward retiring the A340s from service, so G-VFIT Dancing Queen made its final passenger flight earlier in March, and have moved to a new home in Bournemouth last week, along with G-VNAP Sleeping Beauty and G-VWIN Lady Luck, both of which had also touched down there earlier that day. You may still get to see them in the sky, flying charters for their new owner.

One of the last A340 flight departures. Photo by John Powell from our engineering team.

These, our last three A340s, together spent close to 180,000 hours in the sky over more than 21,000 flights during their time in the Virgin Atlantic fleet. Ironically, in all her years flying with us, Lady Luck never made it to Las Vegas.

We were the launch customer for the longer A340-600, flying the first ever commercial service on the type in August 2002. At the time the A340-600 joined us, it was the longest commercial aeroplane in the skies (the Boeing 747-8 later stole the title by just 93cm).

“Our hangar was first opened in a celebration ceremony to unveil the world’s first Airbus A340-600 to enter passenger service; G-VSHY. The unveiling called for a great celebration complete with a visit from Richard Branson, Claudia Schiffer and dancers hanging from the ceiling while Liberty X performed!”  The aircraft then flew off with staff and invited guests to star at the Farnborough Airshow” – Terry Flynn, Manager – Aircraft Assets

Ten A340-300s and 19 A340-600s have graced the Virgin Atlantic fleet in total, traveling the length and breadth of our network and indeed the globe, from New York to Sydney – and many places in between. One of them even scored a cameo role in the 2006 Bond film, Casino Royale! (you can read all about our association with James Bond here)

Back in the 90s we adopted the #4Engines4Longhaul slogan for the fleet, which was the style at the time. However, as newer, more efficient twin-engine aircraft entered the scene, our quad-engine fleet became more expensive to run – and created higher carbon emissions. And while some of our customers continue to maintain an almost fanatical admiration for them, many others prefer to fly on other aircraft (exacerbated by the incredible experience our new A350s offer). But you can’t deny there’s a certain charm and charisma about the A340 that many of us are so fond of.

In 2018 we actually brought one back from retirement. Sleeping Beauty Rejuvenated re-entered service after a couple of years in storage, giving our people and customers more time to enjoy her. We won’t be able to do that again, but you can read all about her story, and that of the “A Big Virgin Atlantic Thank You” that you may have seen on her here.

Having been on the first A340-600 Training course in Toulouse in 2002, I was amongst the first Virgin Engineers to certify our first aircraft delivered that year G-VSHY, I not only worked the aircraft in Heathrow but in New York and later in Lagos and Delhi.

Following on from the highly successful -300 that served us so well, Airbus built on that foundation to heavily stretch the forward and rear fuselage with large ‘plug’ sections, upgraded the much needed power requirements with the 50k lb thrust of the RR Trent engines and increased efficiency of various system modifications and improvements to make a formidable, solid built aircraft that has stood the test of time but without changing the design philosophy.

Personally one area that impressed me was the redesign of the centre landing gear for the increased payload, not only to now include 4 wheels but had the ingenious facility to tilt both ways in “Dip” for landing and “Trail” for stowing in the gear bay on retraction.

I am proud to have been involved with the aircraft from the start.

So, on behalf of the many millions of passengers and pets who flew on them and the pilots, engineers, cabin crew and airport teams who knew this graceful and elegant flying machine so well; Thank you and Godspeed, old friend!

This photo was taken on G-VWEB in her final flight as a Virgin Atlantic aircraft in Tarbes. The aircraft in shot is G-VJAM which was soon to be delivered to us. Out with the old, in with the new. – Adam Pursey, senior first officer.

Bringing back an empty A346 from Manilla back in August 2018 was a wonderful experience. – Alex Gojkovic, cabin service supervisor

Last A340-600 flight for me. Last operational flight with my father and probably the last time I will fly a four engined aircraft.- Andrew Murdoch, senior first officer

My personal favourite 346 moment was seeing these kids from Three Bridges Primary on a visit to our Heathrow hangar. Their little faces gazing up at G-VFIT in wonderment, so lovely to see! – Gareth Neale, Manager, corporate communications

Giving Lady Luck as much runway as possible on its return flight from Tupelo. – Tom Minto, Manager, Aircraft Maintenance

Dropping G-VBUG off at San Bernardino to be scrapped was a strange trip but a special one with a great crew. – Simon Flood, senior first officer

The A340-600 aircraft was my favourite aircraft to fly and work on (sorry Boeing guys!) Funny enough i have great memories from 2012 of bringing back the European team from the Ryder Cup that year. It was touch and go as to whether they would win the Cup but we obviously had full confidence in them as we sent G-VWIN to bring them back from Chicago Rockford airport. Bye old girl, you’ll be missed. – Patrick O’Callaghan, cabin crew

End of an era. Always my fave aircraft-so sad to see them go. Will miss them a lot… -Michelle Gray, cabin crew

Nairobi Inaugural with a crew led in the cabin by Eddie – Lish Kelly, Trainer, flyer.