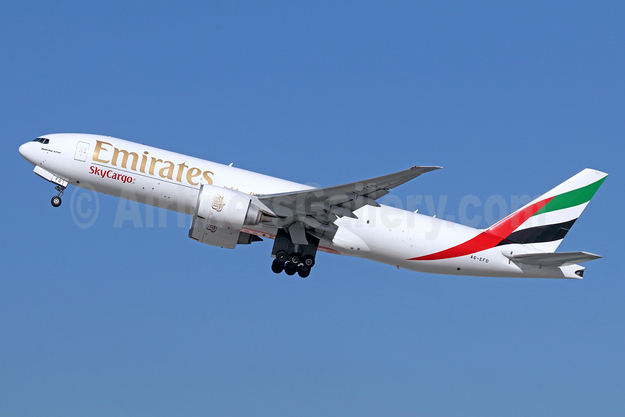 Emirates has made this announcement:

On Monday, March 30, 2020, an Emirates SkyCargo flight carrying close to 500,000 COVID-19 testing kits landed at Sao Paulo Airport in Brazil. The kits were moved from Guangzhou via Dubai by the air cargo carrier on the first of two such flights operated to transport supplies to Sao Paulo. During the same week, Emirates also executed two special charters carrying almost 200 tonnes of medical supplies such as hand sanitisers and protective face masks from Hong Kong to Sydney while another flight transported pharmaceutical supplies to Karachi.

As part of a special charter operation, an Emirates Boeing 777 freighter transported close to 100 tonnes of relief material including hospital equipment to Milan and over 55 tons of highly temperature sensitive pharmaceuticals were flown to New York from Mumbai. Between March and April, the air cargo carrier will also be operating nine freighter flights to Budapest as part of a charter to transport supplies such as face masks and equipment to Hungary.

In addition to transporting critical medical supplies around the world, Emirates SkyCargo is also playing a vital role in bringing food materials into the UAE and the Middle East. During the last week of March, the carrier operated special flights from Pakistan and India to bring in more than 150 tonnes of perishables to Dubai. Dedicated cargo flights from Cairo and Nairobi have also been transporting perishables to Dubai and onwards to other destinations within the Middle East.

Operating within a rapidly changing global environment, Emirates SkyCargo has had to adapt and reinvent its operations and network to make sure that it can continue to facilitate not just transport of essential commodities but also support economies and help businesses around the world maintain continuity by keeping global supply chains up and running.

“In these trying times, we more than ever stand by our commitment for Emirates SkyCargo to act as a global conveyor belt for the transport of much needed commodities such as food and medicines and also for flying in equipment, machinery and other components which are vital for business continuity across essential industries,” said Nabil Sultan, Emirates Divisional Senior Vice President, Cargo. “As an extremely agile and customer-focused business, we have been able to establish a new network and schedule for our cargo operations within a very short period of time, utilising lower deck capacity on our widebody Boeing 777 passenger aircraft which supplement the cargo capacity we offer on our freighter aircraft.

“Additionally, in order to consolidate operations and reduce costs in this new scenario, we have also temporarily shifted all our cargo handling operations to Dubai International Airport (DXB). Taken together we are making sure that we react more quickly to requests coming in from every part of the globe from our customers,” Sultan added.

Emirates SkyCargo has announced a new flight schedule for its global cargo operations which also includes cargo flights operated on its Boeing 777 passenger aircraft. These flights will offer around 40 tonnes of lower deck cargo capacity per flight and will supplement the cargo capacity being offered on Emirates’ fleet of freighter aircraft.

These cargo only flights are scheduled to operate to over 30 destinations across the Middle East, Africa, Asia, Europe and Australia with a majority of destinations being served with multiple weekly and daily flights. The schedules and destinations for the dedicated cargo flights on passenger aircraft have been planned keeping in mind optimal interconnectivity with Emirates’ scheduled freighter operations.

More details on Emirates SkyCargo’s scheduled operations can be found on the air cargo carrier’s website.

In addition to scheduled operations, Emirates SkyCargo will also operate charter and ad-hoc operations on Emirates aircraft based on market demand.