Corsair International operated its last Boeing 747 revenue flight (SS 927 PTP-ORY with F-GTUI) on March 26, 2020. The Jumbos has been grounded since due to COVID-19 and the drop in passenger demand.

The pictured F-GTUI departed Paris (Orly) on June 15 bound for Kemble to be scrapped. The airliner performed a low pass after takeoff as a final salute after receiving a water cannon salute.

Now the airline has decided to permanently retire the Boeing 747 fleet with this announcement:

Corsair is accelerating the renewal and modernization of its fleet with the exit of the three Boeing 747-400s.

After more than 30 years of operations, the departure of the last Boeing 747 on Monday, June 15, 2020 marks the end of the operation of the Jumbo within the company, and the French aerial landscape.

The already scheduled withdrawal of the 747s is part of Corsair’s strategy and thus confirms its desire to operate a homogeneous fleet, composed exclusively of Airbus A330s. The new fleet will bring more flexibility in terms of frequencies and will allow the company to operate more efficient and more environmentally friendly aircraft.

The last Boeing left Corsair after having transported more than 7 million passengers and operated more than 2,000 times around the Earth.

1990 marked the start of the Jumbo’s life at Corsair, then recognized as the largest commercial aircraft in the world. Corsair offered configurations up to 592 seats and allows millions of travelers to move.

The legendary Queen of the Skies has transported the company’s customers around the world by carrying out exceptional flights for more than 30 years, whether on behalf of pilgrims, medical flights, special missions for the UN or cultural and sports operations. The 747 has also marked the memories of thousands of customers who flew to distant destinations like Los Angeles, San Francisco, Tahiti and Bangkok.

Corsair was one of the only two air carriers in the world to have operated all versions of the 747, from 100 to 400, and the SP.

Preceded by its two little brothers, “SUN” and the “SEA”, which left on June 9 and 12 respectively after having transported more than 7 million passengers each, “TUI” leaves the Corsair fleet having exceeded the emblematic threshold of 100,000 flight hours. 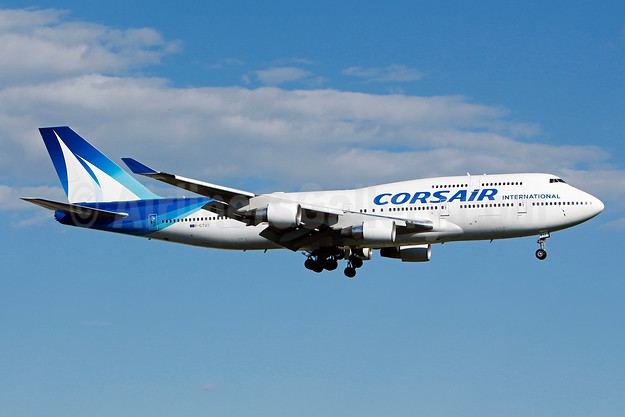