Brisbane Airport made this announcement:

Brisbane Airport, which is usually connected with five nonstop air services to North America, inaugurated its second runway yesterday. The airport, which is a major hub for both Qantas and Virgin Australia, had four air services to the United States pre-COVID: Honolulu (Hawaiian Airlines); Los Angeles (Qantas and Virgin Australia); and San Francisco (Qantas); as well as one Canadian route to Vancouver (Air Canada). Qantas was also originally scheduled to launch a new non-stop service on September 14 this year to Chicago.

With the second runway now open, when international border restrictions lift, BNE will be the best gateway to Queensland and Australia. BNE has the largest domestic network of all Australian airports and the most flights into the South Pacific islands. The Gold and Sunshine Coasts are within driving distance and tropical north Queensland’s heritage-listed barrier Great Barrier Reef and rainforests are only two hours flight away. The spectacular outback of Queensland is also within easy reach.

With sustainability as a focus, the new runway is the first 100 percent LED ‘Cat 1’ lighting system in the Southern Hemisphere. Some additional key facts include:
COVID measurements and results in Brisbane and Queensland:

The management of the spread of COVID within Queensland has been exceptional with strict measures ensuring low transmission throughout the state.  Travelers can rest assured that traveling to and through Queensland is safe. 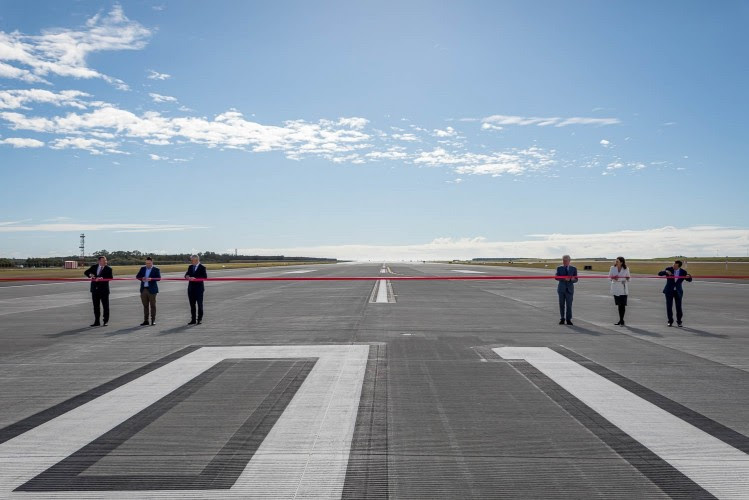 Brisbane Airport’s new runway was opened on July 12 with a celebration of Queensland’s rich aviation history. Three vintage aircraft the first to land, following a breath-taking aerial acrobatics display above the airfield.

Virgin Australia, BNE’s home carrier, had the honour of the first historic departure, flying to Cairns in celebration of Brisbane’s deep connection with the regions and Queensland’s tourism industry.

Following an official ribbon cutting on the runway, invited VIP guests gathered airside with 150 Brisbane Airport Corporation staff and 10 local plane spotters, who won a place at the event in a lucky draw, to watch the first aircraft movements and sky show.

In a first for an Australian capital city airport, the air space above BNE was briefly closed to allow the aerobatics display by ‘Fighter Pilot Adventure Flights’, a Brisbane-based private aircraft collection and flight experience company specializing in warbird operations.

Flying at speeds of up to 500 kilometers per hour at an altitude of 100 meters the aerobatics display included a breath-taking series of linked maneuvers, V-formation flying, and a tail chase.

A copy of today’s The Sunday Mail was the last item added to a special Time Capsule, along with items donated by schools, elected officials, and members of the public. The sealed Time Capsule will be stored on display at BNE’s Kingsford-Smith Memorial until it is opened in 2070.

“This is more than just a formality and a slab of very expensive asphalt. When I look at that 3.3 kilometer stretch of runway, I see hope.

“I see hope because I believe, absolutely, that travel is at the heart of modern society, and the human need to explore means that ultimately nothing will keep us grounded forever.

“While current world challenges mean less demand right now, the timing of this opening is fortuitous. Had we been any later, the project may have been delayed significantly creating more burden on the economy and dampening our spirits further.

“Instead Brisbane is an ideal position to take advantage of all opportunities on the road to recovery from COVID.

“Today we are making history. We are creating the future. And very soon, once again, we will be connecting the world.

“We are generating the jobs of tomorrow. We are reuniting people. We are creating new opportunities. We are fuelling the economy.

“And best of all, we are providing hope and inspiration. This runway is a beacon of hope for a very bright future. Our immediate future. The future of generations to come.

“A future we are ready for. A future we welcome and a future our community deserves.

“I acknowledge and thank every one of the thousands of people involved in the project.

“From those 50 years ago, who had the foresight to include this runway in their planning, to those involved in the design and construction over the last two decades.

“This runway is your legacy. You should be incredibly proud,” Mr de Graaff said.

All photos by the airport.