Delta Air Lines has made this announcement on its second quarter financial results:

Delta Air Lines today reported financial results for the June quarter 2020 and outlined its continued response to the COVID-19 global pandemic. Detailed June quarter 2020 results, including both GAAP and adjusted metrics, are on page four and are incorporated here.

“A $3.9 billion adjusted pre-tax loss for the June quarter on a more than $11 billion decline in revenue over last year, illustrates the truly staggering impact of the COVID-19 pandemic on our business. In the face of this challenge, our people have acted quickly and decisively to protect our customers and our company, reducing our average daily cash burn by more than 70 percent since late March to $27 million in the month of June,” said Ed Bastian, Delta’s chief executive officer. “Given the combined effects of the pandemic and associated financial impact on the global economy, we continue to believe that it will be more than two years before we see a sustainable recovery. In this difficult environment, the strengths that are core to Delta’s business – our people, our brand, our network and our operational reliability – guide every decision we make, differentiating Delta with our customers and positioning us to succeed when demand returns.” 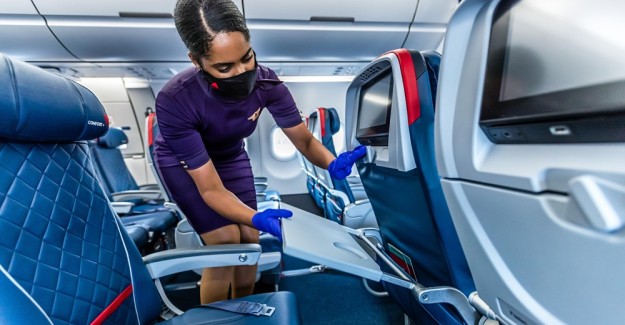 In response to the COVID-19 pandemic, the company has prioritized the safety of customers and employees, the preservation of financial liquidity and ensuring it is well positioned for recovery. Actions under these priorities include:

Protecting the health and safety of employees and customers

Demand for air travel declined significantly in the June quarter as a result of COVID-19, with enplaned passengers down 93 percent year over year. As a result, Delta’s adjusted operating revenue of $1.2 billion for the June quarter was down 91 percent versus the June 2019 quarter. Passenger revenues declined 94 percent on 85 percent lower capacity. Non-ticket revenue declined 65 percent, as Cargo, MRO and Loyalty revenues declined at a lower rate than ticket revenue.

Total adjusted operating expense for the June quarter decreased $5.5 billion or 53 percent versus the prior year quarter excluding a $1.3 billion CARES Act benefit, and $2.5 billion in restructuring charges from fleet-related decisions and other charges. This performance was driven by a $1.9 billion or 84 percent reduction in fuel expense, a 90 percent reduction in maintenance expense from parking over 700 aircraft and significantly lower volume- and revenue-related expenses. Salaries and benefits expense was down 24 percent, helped by more than 45,000 employees electing to take voluntary unpaid leaves.

“Our June quarter cost performance reflects extraordinary work by the entire Delta team, as we removed more than 50 percent from our adjusted cost base,” said Paul Jacobson, Delta’s chief financial officer. “We expect to achieve a similar 50 percent year-over-year reduction in the September quarter despite a sequential increase in capacity, reflecting the increased variability we have achieved in our cost structure.” 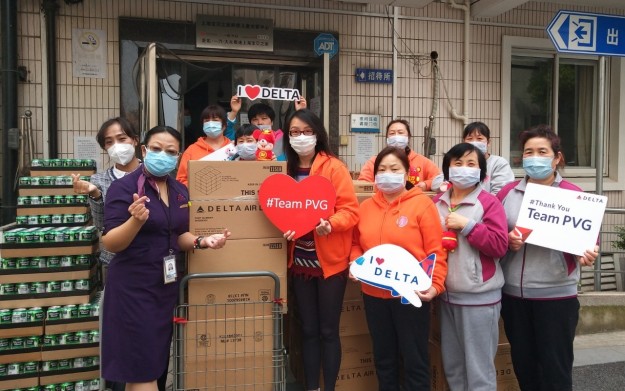 At the end of the June quarter, the company had total debt and finance lease obligations of $24.6 billion with adjusted net debt of $13.9 billion. During the quarter, the company raised $11 billion in new liquidity at a blended average rate of 6.5 percent. New financing completed during the quarter included $5.0 billion in slots, gates and routes secured financing, $2.8 billion in sale-leaseback transactions, $1.4 billion of the PSP loan, $1.3 billion in unsecured notes, $243 million in B tranches of Enhanced Equipment Trust Certificates (“EETCs”) and an additional $250 million on its 364-day secured term loan.

“Our average daily cash burn has improved sequentially each month since March and we remain committed to achieving breakeven cash burn by the end of the year,” Jacobson continued. “We successfully bolstered our liquidity to $15.7 billion at the end of June through new financings and CARES Act funding during the quarter, with adjusted net debt of $13.9 billion increasing by $3.4 billion since the beginning of the year. By raising cash early and aggressively managing costs, we are prepared to navigate what will be a volatile revenue period while making decisions that position Delta well for the eventual recovery.”

In April 2020, Delta was granted $5.4 billion in emergency relief through the PSP of the CARES Act to be paid in installments through July 2020. In the June quarter, the company received $4.9 billion under the PSP, consisting of $3.5 billion in grant funds and a $1.4 billion low-interest, unsecured 10-year loan. The remaining $544 million will be received in July 2020. In the June quarter approximately $1.3 billion of the grant was recognized as a contra-expense, which is reflected as “CARES Act grant recognition” on the Consolidated Statements of Operations over the periods that the funds are intended to compensate. The remaining $2.2 billion of the grant was recorded as a deferred contra-expense in other accrued liabilities on the Consolidated Balance Sheets. The company expects to use all the proceeds from the PSP by the end of 2020.

During the June quarter, the company made the decision to retire the entire MD-90, 777 and 737-700 fleets and portions of its 767-300ER and A320 fleets by late 2020. This is in addition to the decision in the March quarter to accelerate retirement of its MD-88 fleet from December 2020 to June 2020. The company also cancelled its purchase commitment for four A350 aircraft from LATAM. Primarily as a result of these decisions, the company recorded $2.5 billion in fleet-related and other charges, which are reflected in “Restructuring charges” on the Consolidated Statement of Operations.

During the June quarter the company recorded a write-down of $1.1 billion in its investment in LATAM Airlines and a $770 million write-down in its investment in AeroMexico following their financial losses and separate Chapter 11 bankruptcy filings. Delta also wrote down its investment in Virgin Atlantic during the quarter, resulting in a $200 million charge. Write-downs related to equity partners are reflected as “Impairments and equity method losses” on the Consolidated Statement of Operations.

June quarter results have been adjusted primarily for the CARES Act accounting, restructuring charges, and investment-related write downs described above. 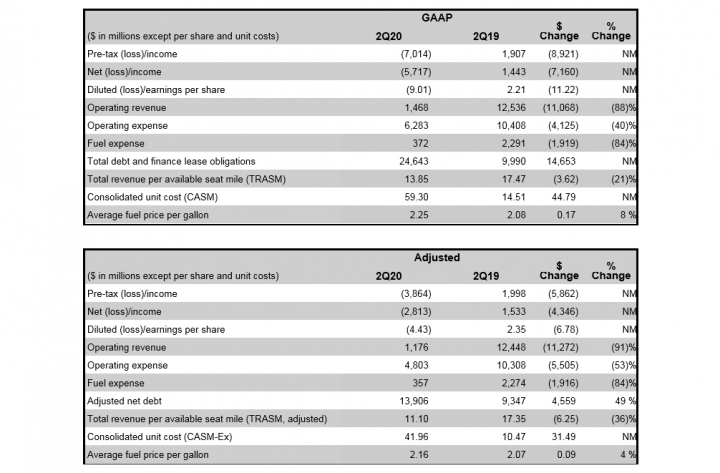