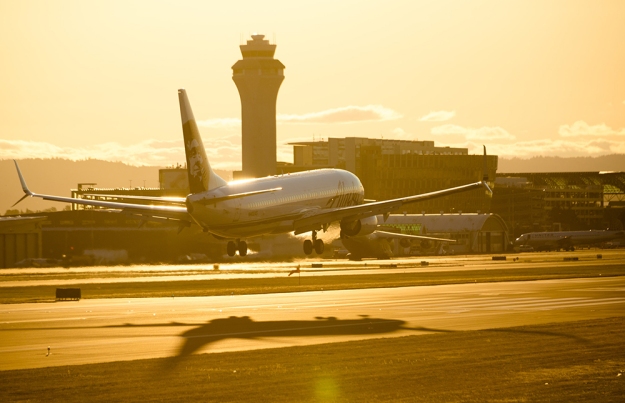 Alaska Airlines  made this announcement:

Alaska Airlines began the temporary suspension of all flights to and from airports in Portland and Spokane starting at 3 p.m. on Monday, Sept. 14, as the Pacific Northwest continues to battle intense wildfires and hazardous air quality. The flight suspensions are expected to last until 3 p.m. on Tuesday, September 15.

Across the West, fires are creating thick smoke and haze, causing very poor air quality conditions in the Portland and Spokane areas. We made the difficult decision to stop our operation so that our employees and guests can remain safe.

Alaska Airlines, along with its regional carrier Horizon Air, has canceled dozens of flights in Portland and Spokane for that 24-hour period.

Alaska and Horizon have also canceled flights at smaller airports due to fire and smoke including Eugene, Medford and Redmond/Bend in Oregon, and Pasco and Walla Walla in Washington.

Improving weather conditions in the coming days could begin to dissipate smoke in Portland and Spokane. However, other airports in the West could be impacted by drifting smoke.

Winds of Change Move Western Smoke Into the Pacific

NOAA/NASA’s Suomi NPP satellite captured these series of images (made into an animated GIF) showing the winds changing direction on Sep. 06, 2020 when choking clouds of brown smoke began to billow and cascade into the Pacific Ocean. (Dates displayed in lower left hand corner.) By Sep. 10, the smoke cloud had traveled over 1,300 miles. The square miles of smoke in the image below totals 963,269. That estimate has been computed using the measurement tool within the NASA Worldview application.

A stunning 3.1 million acres have burned this year in California alone (per CAL fire), which is up from a total of 2.5 million acres as of Wednesday, Sep. 09, 2020. In addition, 805,314 acres have been lost in Oregon (State of Oregon Fires and Hotspots Dashboard, as of 9:30am EDT Sep. 11) and 500,000 acres (Northwest Interagency Coordination Center) in Washington state. Winds blowing through the west have been stoking fires and helping spread them quickly as evidenced in the growth of over a half million acres in less than two days. There have been 12 wildfire-related fatalities this year. Records have been shattered during this fire season and experts continue to blame drought, excessive heat and strong winds for this tragedy. Because the climate continues to change, scientists also believe that these types of fire events will not only continue but will worsen. Predictive meterologist for the National Interagency Fire Center, Nick Nausler, tweeted: “Multiple fires made 20-plus mile runs in 24 hours over the last few days in California, Oregon and Washington. Such distances traveled so quickly may not be all that rare in grassland fires. However, most of these fires are making massive runs in timber and burning tens of thousands of acres and in some cases 100,000-plus acres in one day. The sheer amount of fire on the landscape is surreal.” 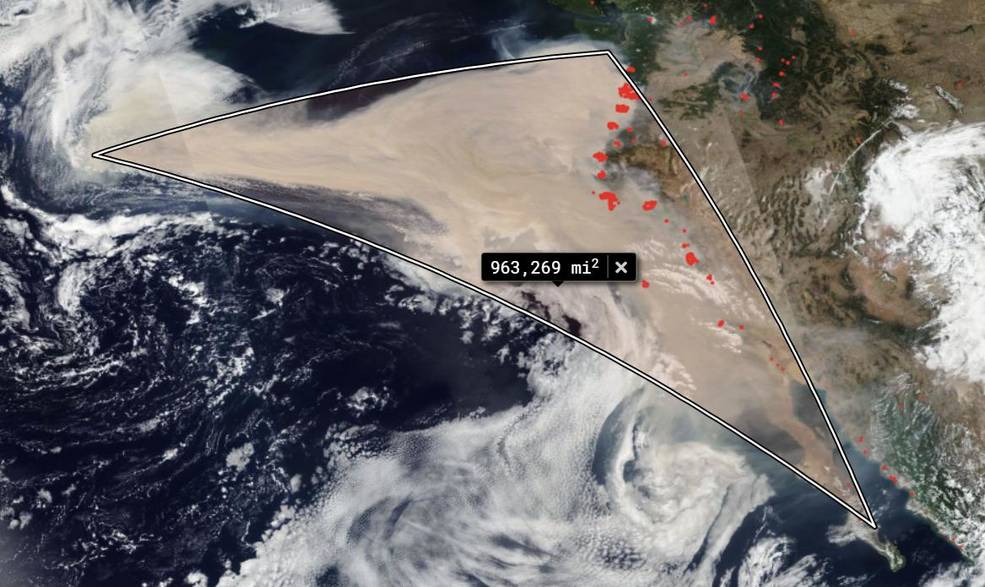 The square miles of smoke in the image below totals 963,269. That estimate has been computed using the measurement tool within the NASA Worldview application.
Credits: NASA Worldview