According to The LoadStar Volga-Dnepr has decided to “put safety first” and made the decision to ground its eight Antonov An-124s, following a recent incident at Novosibirsk.

On November 13, 2020 the airline issued this statement about the recent incident:

Volga-Dnepr’s An-124-100 ramp freighter aircraft has made an emergency landing in Tolmachevo Airport (Novosibirsk, Russia). The captain took the decision to return to the airport of departure due to technical issues and the plane rolled off the runway upon landing. No crew members were injured.

The plane was operating a charter flight from Seoul (South Korea) to Vienna (Austria) with a tech stop in Novosibirsk (Russia) with 84 tons of automotive spare parts. The airlines’ technical support crew with essential equipment immediately flew to Novosibirsk to evaluate and rectify any consequences.

After the emergency landing, all crew members were examined by medical personnel and most importantly none were injured. At the moment we are cooperating with the aviation authorities and Novosibirsk airport with respect to this event and will thoroughly analyze the situation accordingly’, – highlighted Igor Aksenov, General Director of Volga-Dnepr Airlines. 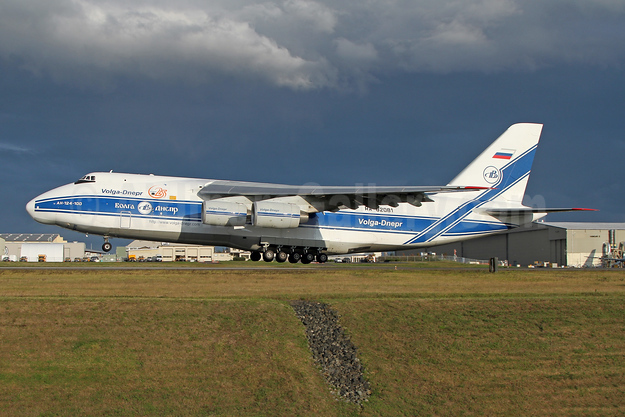